Ice rinks can be an exciting tourist attraction for any town; however, they also come with their own list of positives and problems, including cost and maintenance. These will vary as to the area as well as whether the rink is a permanent, indoor structure or temporary for the winter.

While four ice arenas exist in Kentucky, only one is municipally owned and operated. That is the Edge Ice Center in Owensboro, Ky. According to Kerry Bodenheimer, recreation superintendent, “We pride ourselves in being the only municipal arena and being able to offer our citizens and those in surrounding counties the experience of ice skating.”

Since 1963, Owensboro has supported an ice rink in their community. The city enjoys being able to offer a unique recreational experience to the community with yearround ice skating in their indoor facility. It also provides the city with an economic tool that helps to bring in money from tourism with competitions, out-of-town visits and tournaments.

The rink is vital to the community because, as Bodenheimer stated, “It provides family fun, social benefits, a place for our tweens and teens to socialize and, in addition, provides a competitive avenue through figure skating programs and competitions, hockey tournaments and travel hockey.”

Like the majority of municipally ran recreational facilities, fees are charged for patrons who wish to use the ice rink. These fees are then used to offset the operating costs. The remaining cost is subsidized by city funds. Bodenheimer refers to the city’s previous fiscal year in which fees were able to cover 75 percent of the ice rink’s operating expenses so that only 25 percent had to be subsidized.

Ice rinks are known to be high maintenance and have high operating costs, and Edge Ice Center is no exception. A part-time staff works at the rink and receives additional support on electrical, HVAC and plumbing matters from the trained technicians with the city’s public works division. Regular preventative maintenance is required across all parts of the facility, which includes skates, ice quality, mechanical operations, food operating equipment and general facility upkeep.

Being a year-round ice rink requires additional maintenance and upkeep. It can offer certain challenges, particularly during the warm summer months. For instance, the ice rink houses a dehumidification system that works hard to keep humidity out. During the hotter summer months, it has to work harder and can drive up utility costs. Bodenheimer commented, “Having all members of the staff being held accountable for the upkeep, cleanliness and general appearance is key.”

The benefits of the ice rink far outweigh any attributes that could be considered negative for the city of Owensboro because it provides a recreational facility that serves the community regardless of age or socioeconomic status.

The tagline for the ice rink is “We are the COOLEST place in town” and is paired with an impressive list of programs offered. These include the usual skating lessons, birthday parties and holiday events such as skating with Santa, a New Year’s Eve party or trick-or-treating. They also offer summer day camps and winter and holiday break day camps for children. The summer day camps have grown in such popularity that they now account for 15 percent of the rink’s total annual revenues.

Being open year-round also provides the community with additional opportunities for summer leagues and travel hockey programs. These can be particularly inviting during the hot and humid Kentucky summers. 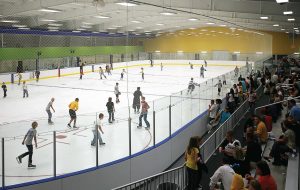 The Edge Ice Center in Owensboro, Ky., provides year-round family fun on the ice. A variety of programs, regardless of season, help to generate additional revenue for the city and help to pay for the rink’s operating expenses. (Photo provided)

An Olympic-size ice rink can be found during the winter months in Bethlehem, Pa. Laying the ice and the logo tend to be some of the more time-consuming aspects of maintaining the ice rink. (Photo provided) 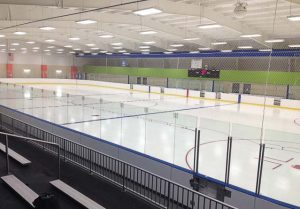 The only municipally ran ice rink in Kentucky is in Owensboro and is indoors. While it requires a great deal of preventative maintenance and costs can be high, it is an indispensable asset to the community. (Photo provided)

The municipal ice rink in Bethlehem, Pa., is outdoors and, therefore, seasonal, but it is unique in that the skating rink is Olympic sized and covered with a roof, though not enclosed. The season typically goes from late October — when employees begin making the ice — to March; however, due to this year’s unseasonably high temperatures, they are a bit behind schedule.

Thanks to the rink, the city is able to provide a memorable outdoor activity for residents throughout the winter months. Events held at the rink generate a source of income to help with its expenses, and it is funded through the city’s operating and capital budget.

The ice making process is the most time-consuming maintenance concern. Employees spend a few days working around the clock laying the water, putting the logo on and painting the ice. Another maintenance difficulty involved with having a seasonal, outdoor rink is having to deal with the outdoor elements. The set-point of the ice must constantly be monitored since the ice is kept cold thanks to glycol-filled underground pipes. If the weather gets warmer, condensation can lead to fog and dripping.

Maintenance of the Zamboni is also of the utmost importance. Jane Persa, recreation director, commented, “We also have to be sure our Zamboni is well maintained since operations would stop if the Zamboni goes down. Obviously, indoor rinks do not have to worry about outside temperatures so it is probably easier to maintain the ice.”

When the winter season has ended, the machinery is simply turned off and the ice is allowed to melt on its own. The pipes are then drained, the logo removed and a floor machine is rented to mop up any excess water.

As with the indoor rink, skating lessons, birthday parties and private rentals are offered. Hockey teams use the rink for practice and games, and schools even rent it out for family nights. However, Bethlehem makes sure to utilize this space during the summer months as well.

Persa said, “In April and May, the rink is used for an American Cancer fundraiser, ‘The Boutique at the Rink,’ which is run by many volunteers and is basically a huge yard and clothing sale that generates over $100,000 for the local chapter.”

Then throughout June, July and August, summer day camps are held. Two local roller derby teams also use the space for practice during the week and bouts on the weekend.