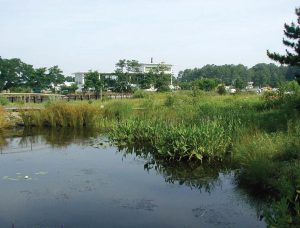 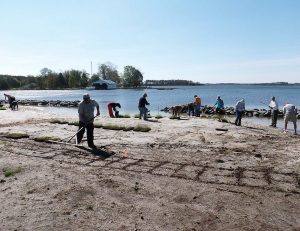 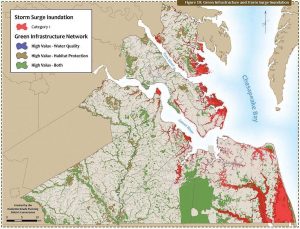 The rate of sea level rise in Virginia is somewhere between 5 and 6 millimeters per year, which is almost twice the global rate. Pictured is a green infrastructure and storm surge inundation map of Virginia created by the Hampton Roads Planning District Commission. (Photo provided) 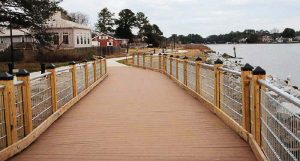 Pictured is the Haven Creek’s elevated boardwalk in Virginia. With sea levels on the rise, states and localities will have to plan accordingly when it comes to coastal projects. (Photo provided)

For low-lying coastal cities, the global trend of rising sea levels is not something to be taken lightly.

And those are just three examples located on the East Coast.

According to Virginia Institute of Marine Science researcher Molly Mitchell, the rate of sea level rise in Virginia is somewhere between 5 and 6 millimeters per year, which is almost twice the global rate.

“The 2 feet of rise in very flat areas by 2050 will mean that the tide will come in further each day. When you have houses built close to the water in low elevation areas, they’re going to get water underneath them more frequently. That leads to small inconveniences, like stopped traffic or small basement floods,” Mitchell said. “But the capacity of the city’s storm management system is where real issues lie. If storm surges come in and the system isn’t built to handle it, areas that used to never be impacted by surges are now in the middle of it.”

Additionally, Mitchell cited the economic impact sea level rise will have on coastal cities since waterfront businesses generate a large portion of revenue.

Lawmakers in Virginia are not blind to the potential impact sea level rise will have on its cities. According to a study released by the Natural Resources Defense Council, Virginia is listed as one of the 29 states that were “largely unprepared and lagging behind” on planning for climate change at the state level, and that’s where organizations like the Virginia Institute of Marine Science come into the picture.

VIMS has an advisory role in the state of Virginia and was approached as long ago as 2012 regarding concerns about sea level rise. Between work with localities to learn about their solutions and a cooperative partnership between VIMS, Old Dominion University and the College of William and Mary, significant work has been done to combat the state’s poor standing in preparedness.

“We’re trying to monitor and project future sea levels based on today’s changes,” Mitchell said. “We at VIMS put together a projection of current flood areas and what areas are projected to flood in the future. Then, the law and policy schools at the colleges look at the legal responsibilities of the localities versus the private homeowner.”

Hot button issues include evacuating residents and how to alter policy for storm surge protection.

The Adaptation Planning Committee within the Department of Economic Opportunity in Florida has an extensive webpage dedicated to planning for coastal flooding and sea level rise. The goal, according to the site, is to “become more resilient to the impacts of rising seas over a period of time,” and it shares strategies outlining protection, accommodation, strategic relocation, avoidance and procedures.

Additionally, a page dedicated specifically to redevelopment strategies and plans is included, specifically designed to “eliminate inappropriate and unsafe development in the coastal area when opportunities arise.”

While all the planning in the world is a great start, nothing can get done without all the pieces falling perfectly into place, largely from a monetary standpoint.

“Adapting to sea level rise is difficult to do on a large scale,” Mitchell said. “The cost of putting up levies in a locality is prohibitive. For homeowners, the cost of raising a house is prohibitive. There unfortunately aren’t a lot of adaptations to those longterm solutions.”

The other struggle, Mitchell said, lies in deciding who is ultimately responsible for sea level rise preparedness: individuals or the local government.

“Do you protect an area the best you can systematically, or do you leave it to each individual property owner to pay for those efforts and adapt individually, knowing some won’t be able to afford to,” Mitchell said.

The answer, she suggested, lies in the collaboration between citizens, local governments and sea level rise experts.

But for now, fear not, coastal city residents. “The good news,” Mitchell said, “is we have a decent idea of where the sea level rises are heading, which gives us plenty of time to deal with these problems.”