By RICHARD HADLEY | Chairman, Board of Supervisors, Cranberry Township, Pa.

In a preamble to the blog our township has maintained for the past eight years, there’s a statement that says “No level of government has more impact on daily life than local government.”

That’s not just a hollow conceit to those of us who have worked in local government. It’s a fact. But it’s a fact that’s sometimes hard to see because most news organizations focus on the sharp-elbowed, sharp-tongued dysfunction that takes place in our state and national capitals. As a result, most people’s conversations about government center around the ideological dogma and partisan clamor that goes on in legislative chambers, frequently amped up to stadium levels by cable news pundits. So their conclusions about the democratic process are understandably cynical.

What’s overlooked is that the services, which make civilized life possible — water, schools, sewers, police, parks, traffic control and more — are the responsibility of local governments, authorities and boards, not of the federal government or its abundance of specialized departments. Local governments are pragmatic, not philosophical. There is no liberal or conservative approach to fixing a broken sewer line or to filling a pothole. Even an anarchist would likely see it the same way. 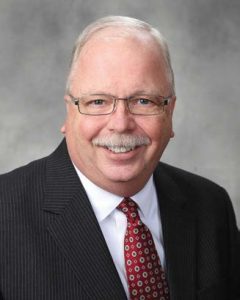 Richard Hadley, chairman of the Cranberry Township Board of Supervisors 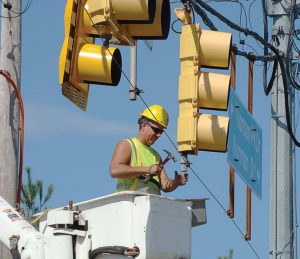 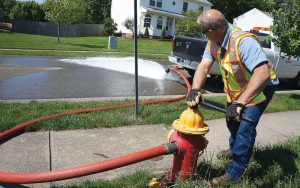 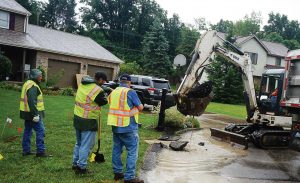 The integration of politics at a local level can prove to be a hindrance when providing citizens with quality services. There is no liberal or conservative approach to fixing a broken sewer line or to filling a pothole. Pictured, Cranberry Township public works employees repair a waterline break. (Photo provided)

Of course, there are big issues, like foreign policy, which may be suitable for the federal government to work on. But even there — as in most of the other issues people tend to think of as national in scope — local government is where the consequences actually play out. And it is at the local level where they tend to get addressed most meaningfully.

Take, for example, environmental protection. In Pittsburgh, which is only 15 miles from Cranberry Township, smoke control legislation was implemented as far back as World War II — decades before there was a federal Environmental Protection Agency. When the Trump administration rejected the Paris Accord on climate change, the mayors of local governments around the country stood up to say they would continue the work of reducing greenhouse gases through building codes designed to increase the energy efficiency of new structures, minimizing dwell times for vehicles at intersections and more.

Foreign relations and immigration are the focus of Sister Cities, diversity fairs, English language instruction and other locally based programs designed to bring new arrivals into the American mainstream. Interstate communications are made possible by municipal leases to phone and cable companies for using local rights of way to hang wires, bury cables and erect towers. Our transportation network is dependent on municipally owned and maintained traffic signals, signs, lane markings and other control mechanisms. Public health is the responsibility of municipal water systems, ambulance services and restaurant inspectors as well as other local resources. And the list goes on.

What they all have in common is that they’re pragmatic issues, not ideological ones.

The triumph of pragmatism

About a year ago, Fordham University professor Benjamin Barber gave a TED talk in which he repeated a wonderful anecdote about the legendary mayor of Jerusalem, Teddy Kollek — a practical-minded civic leader who served from 1965 to 1993. One day, Kollek’s office was besieged by religious leaders of all different faiths — Christian, Prelates, Rabbis, Imams. They were arguing with one another about access to the holy sites. And their squabble went on and on. Kollek listened and listened and finally said: “Gentlemen: Spare me your sermons and I will fix your sewers.”

That’s what local leaders and municipal governments do. And it transcends traditional party lines — which are ideological affiliations that get in the way more than they help. That may also be why it’s usually more difficult to choose candidates to support in local elections than in national ones: It’s that most of them are practical people, not party hacks. They don’t, as a rule, grandstand about wedge issues that have little to do with life in local communities. Candidates who showcase their views about abortion, gay marriage, stem cell research and religious convictions in local elections should be treated with suspicion; they’re distracting you from what it is that local governments actually do.

I’ll admit that good candidates with practical ideas can be hard to differentiate, which may be why turnout for local office elections tends to be embarrassingly low, even though their importance to residents’ daily lives is huge. At the same time, however, most communities tend to be dominated by one political party or another, so party line differences are largely irrelevant. What that means is if there’s a candidate whose public pronouncements tend to mirror a party’s line too closely, they probably aren’t paying enough attention to what’s happening in their own home community.

For most American communities, party ideologies are not only irrelevant, they’re toxic. And they should be rejected.