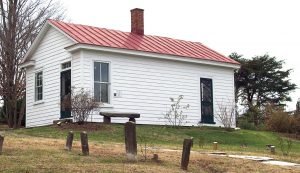 The Pest House was built in the 1840s and served as a quarantine hospital in Lynchburg, Va., until aft er the Civil War. (Wikimedia Commons) 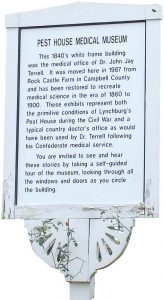 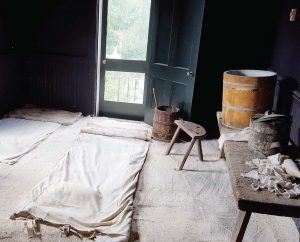 The patients’ room at Pest House was painted black to alleviate light sensitivity in smallpox patients and white sand was used to trap germs. After each patient’s stay, the sand was swept out the door. (Photo provided by Ted Delaney) 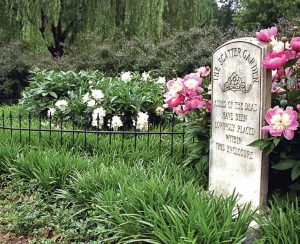 The scatter garden in the Old City Cemetery is available for mourners who wish to scatter the ashes of their dear departed. (Photo provided by Ted Delaney) 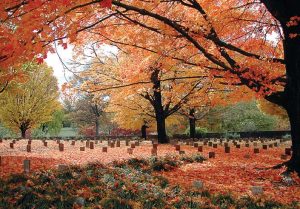 The Confederate cemetery contains an estimated 2,000 graves, two-thirds of which are the resting places of African American soldiers and slaves. (Photo provided byTed Delaney)

It takes a hero to wade soul-deep into a miasma of death and laboriously rescue victims teetering on the abyss. Dr. John Jay Terrell was that kind of a hero.

The good doctor volunteered to staff the first of 39 hospitals in Lynchburg, Va., most of which sprang up in tobacco warehouses, shoe factories and homes during the American Civil War to address Confederate casualties.

Terrell, a Quaker, adhered to his sect’s doctrine of pacifism and refused to join the fighting forces. Nor did he pay to have another man enlist in his stead as did some of his brethren in the faith.

So he volunteered, with the help of two nurses and a priest, to tend to soldiers suffering from smallpox, cholera and scarlet fever in Lynchburg’s quarantine hospital, Pest House, or “house of pestilence.”

“I would describe him as courageous,” said Leah Harness, a volunteer docent for the Pest House Museum and surrounding cemetery located on the near west side of Lynchburg.

“He would have been breaking every rule in the book. The Quakers didn’t want anything to do with the war.”

But Terrell’s dedication and ingenuity saved a lot of lives.

He noted the deplorable conditions of the hospital built in the 1840s — whose standards of medical care and sanitation were almost nonexistent — and spearheaded major changes.

His medical innovations, scoffed at by many of his colleagues, plummeted the mortality rate of Pest House patients from 50 percent to 5 percent.

Terrell was one of the first doctors to wash his hands and sterilize his instruments between surgeries.

He painted the patients’ room black to ameliorate the ocular hypersensitivity to light caused by the smallpox virus.

“There were no beds at Pest House,” said Harness. “He ordered a special white sand to put on the floor. He placed a few linens on top and that is where the patients would lie down. He would sweep the sand with the germs out the door and that cut down on the spread of diseases.”

Terrell prescribed a special diet, “including sauerkraut,” according to Harness.

“I had a barrel of linseed oil and limewater to use as an ointment, with which I greased sores, so had no more sticking of clothing,” Terrell wrote of his three-year experience at Pest House.

After the war, the penniless doctor opened an office on his farm outside of town and served the local populace — often traveling on horseback — until his death at 93 years of age in 1922.

In 1987, Terrell’s office was moved to the 26-acre Old City Cemetery, which hosts the graves of an estimated 2,000 slaves and Confederate soldiers. The historical parcel also includes the Hearse House, Caretakers Museum, Station House Museum, Mourning Museum and a chapel still used for weddings.

The office was joined with a quarantine room to “give a more complete picture of 19th-century medicine, while still telling two very separate stories,” according to the complex’s website, www.gravegarden.org.

“The Old City Cemetery is the most visited historic site within the Lynchburg city limits,” said Ted Delaney, executive director of the Southern Memorial Association. “We count 33,000 visitors annually during staff hours, but because our gates are open dawn to dusk every day, the true number is probably over 60,000.”

“They come from all over the world,” said Harness, citing France, Belgium, Germany and Brazil as nations of origin.

The influx of visitors benefits the economy of Lynchburg, population 80,212, and several hotels and eateries in town make it a point to recommend the Old City Cemetery to their boarders and diners.

“We have a model public-private partnership between the city of Lynchburg and the local nonprofit SMA,” said Delaney. “The city provides regular groundskeepers and a modest annual appropriation. SMA manages the cemetery by a five-year contract with the city. The nonprofit leverages municipal support to raise private funds and reinvest them back into the property.”

Perennial beauty arises from amidst the graves. “The cemetery is also a beautiful garden,” said Harness. “There is almost always something blooming.

“We have more than 350 rose bushes representing the entire history of the species,” said Delaney. “We also have an herb garden and a scatter garden where people can scatter the ashes of their loved ones. The garden is visible from the road and we put up a commemorative plaque for a nominal fee.”