It’s a shocking statistic that each year, 365,000 people in North America suffer from sudden cardiac arrest, a condition in which the heart unexpectedly stops beating, preventing blood from getting to the brain and other vital organs. If not treated within minutes with the aid of a defibrillator, a machine that jumpstarts the heart into a normal rhythm, the result is death.

Because time is of the essence, automated external defibrillators are often found in public spaces and can be used by anyone in the event of a medical emergency. Their presence, however, is not a guarantee, and since police officers are often the first to arrive on the scene, it only makes sense that they have access to this lifesaving equipment. The solution? Carry an AED with them.

For years, patrol cars have been outfitted with first-aid kits and CPR masks while every officer has received CPR training, but an AED gives them a distinct advantage when minutes matter and it’s a question of life or death. CPR alone may provide someone in SCA a 6 percent chance of survival, but an AED can improve those odds dramatically, and agencies are looking for ways to purchase these units and prepare their officers to use them.

Over the past 30 years, a number of states have adopted legislation that requires patrol cars to carry an AED. In 1990, AEDs were available in only four police cruisers patrolling the streets of Rochester, Minn. Today they can be found in every patrol care in the city as well as aboard the local fire trucks and ambulances because leaders recognize their importance when a life is on the line. In 2005, New York required AEDs to be installed in all 1,500 marked state police patrol cars as well as available in the 300 agency offices across the state.

It is a growing trend, but not every agency has the budget to afford the expensive units. Police departments looking to provide an AED for every vehicle must get creative in order to find the funds they need.

When Bob Lundsten nearly lost his wife, Kathy, during a 2001 SCA event at a school gym with no AED, the businessman rallied the community of Dunwoody, Ga., to raise $75,000 so that every police car could have this vital equipment. When the police department of Edina, Minn., was in need of some new AEDs to replace models that could no longer be serviced by the manufacturer, Lt. Dan Conboy looked into a grant through Firehouse Subs Public Safety Foundation. He went to the foundation’s website to answer a few qualifying questions and then set about applying for the necessary funds.

“It involved a lot of writing,” he said. “I had to chronicle the history of the organization, what kind of safety equipment you need and how it will benefit the community. I applied for the money to cover 16 brand-new AEDs, and the foundation met that need. It was just under $21,000.” 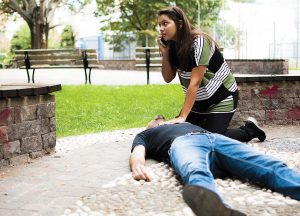 In the case of a sudden cardiac arrest, police are often the first to respond to the scene. While CPR alone may provide someone in SCA a 6 percent chance of survival, an automated external defibrillator can increase those odds of survival, sparking many agencies to procure these devices.
(Shutterstock.com)

AEDs can make a difference when seconds count because officers are usually on the road when the call comes in and are often the first to arrive at the scene in an emergency situation. Such was the case on July 14, 2015, when a day of summer fun turned fatal for 8-year-old Gavin Quance of Bluffton, S.C. The happy, energetic and outdoors-loving boy was playing near the family pool when his mother, Amanda, found him facedown in the water. She immediately called 911 and the first people to arrive on the scene were the Bluffton Police Department who began to perform manual CPR on the child. Five minutes later, the EMS team arrived and transported Gavin to the hospital. However, he never regained consciousness.

Although it is unclear what caused Gavin to drown, if the officers had had AEDs, his chances of survival would have been significantly higher than CPR alone. In order to improve those odds in future events, the agency partnered with the Arrhythmia Alliance and the Quance family to raise $50,000 to purchase an AED for every patrol car. After purchasing 31 units, the AED campaign continues to purchase pediatric pads for every device. In March, the Bluffton Township Fire Department donated a mobile AED to the BPD to keep in the agency’s patrol boat.

“This was such a gracious donation and at a perfect time,” Police Chief Joey Reynolds said in a local interview. “We worked hard on our 2015 AED campaign … but now that we have one for the boat, it means our officers can provide life-saving actions to the community on land and water.”

AEDs are not cheap. According to the American Heart Association, the machines range from $1,500-$2,000 each, including its carrying case, spare adult pads, pediatric pads and spare battery. In addition to securing thousands of dollars to have an AED in every patrol car, departments have to ensure that their AED program is well coordinated and well implemented. Laws and regulations must be researched. Risks must be mitigated. Policies must be designed. Funding must be secured. Training must be held and deployment should be conducted in such a way that every officer feels confident in their abilities to operate the machine when and if the situation arises. Quality of care must also be evaluated to ensure best practices are always followed whenever the AED is in use. 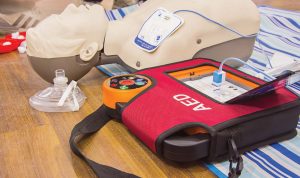 AEDs can range in price from $1,500- $2,000 each, and many departments have turned to grants and grassroot fundraising to add them to squad cars. (Shutterstock.com)

But it is a worthwhile investment when a community considers the lives that could be saved by officers having these devices at the ready. Conboy said his department uses its AEDs 10 to 12 times per year on average, but that is 10 to 12 citizens that can be helped.

“AEDs are beneficial, but they can only be used in very specific situations,” he said. “It’s not an option if someone is already dead, and you can’t use it if there is a pulse, but they can save a life and there are a lot of grants out there to help agencies afford them. The timing was right and it worked out well for us. I would recommend it to any agency.”