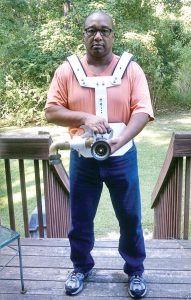 Ken Blocker wears Aqua Blaster, which is pointed straight out, as if it were in use it. (Photo provided)

William K. “Ken” Blocker of Lexington, S.C., may soon be in the enviable position of having firefighters all over the nation doffing their heavy helmets to him for an invention that makes firefighting easier and safer.

Blocker, however, was employed by the city of Columbia Fire Department in South Carolina as a training cadet for only six weeks. But that short stint led to something huge; however, it took some experimentation to reach that point.

A baseball scholarship first sent Blocker to Jackson State University, but he ended up dropping out of school and dabbling in a variety of jobs — furniture moving, tree trimming by contracting with the phone company to trim and cut trees around its lines — and finally into corrections.

“That path showed more of what I didn’t want to do and I knew that I needed to have something more stable with benefits,” said Blocker. “That’s how I got into corrections because they’re always hiring due to the turnover. I didn’t have a criminal record, and it seemed ideal for me at the time. Surprisingly, I stayed in that fi eld for almost 10 years. I also worked as a security officer at a hospital for nine years and with the South Carolina Department of Mental Health for five years. I resigned last August to pursue my business (KBLOCK Tools LLC) full time after the TV show had aired.”

Backing up a bit, after several years in his corrections career, Blocker thought it was time for a career change and thought he’d enjoy being a firefighter.

“It is ironic that my employment ended in six weeks as a cadet; I was told that my safety and the safety of others was of utmost importance,” said Blocker, adding that because of his short stint with the fire department, he never had the opportunity to actually fight a real fire.

However, in the days following his exit from the fire department, a seed began to germinate in his mind.

“As a cadet trainee, I realized how difficult it was to handle a charged fire hose. From that experience, I had an epiphany that there had to be an easier way to manage a charged fire hose, something revolutionary,” said Blocker, who returned to his law enforcement career after leaving the fire department, though he has since retired.

Blocker’s invention has found a wide span of use outside of the fire service, including within the military. (Photo provided)

Blocker’s invention has found a wide span of use outside of the fire service, including within the military. (Photo provided)

Aqua Blaster is used for dust control elsewhere; however, there are several industries that could use this device, including construction, mining and demolition control. (Photo provided)

“Like many inventors, I didn’t have a clue as to how to start pursuing my invention so I went through a consulting company and spent thousands of dollars for little or nothing,” said Blocker.

“On the bright side, I managed to get an idea on a design, and I was awarded my first patent, so even though I spent a lot of money, it was a lesson and part of the process that has led up to this moment. I’ve learned to be optimistic in every experience of this endeavor. As far as the tooling and the overall development of this product, I had machine shops assist me with designs as I provided sketches on modifications that were made throughout the years of pursuing this concept.”

All of his efforts paid off, with Blocker stating, “My product, the Aqua Blaster fire hose carrier, was on CNBC’s ‘Make Me a Millionaire’ inventor season two, where I secured a $1,000,000 investment. I’m in the process of launching my product to the various industries that use fire hoses and firefighting nozzles to carry out and accomplish a specific task. My manufacturer is also in the process of modifying the flow control part of my product that will reduce the weight even more and further enhance the capabilities of the mechanical functions that will exceed the standard requirements to ensure the merit of this concept.”

As for his experience with the show, he said, “The way they orchestrate the show is by searching throughout the country looking for inventions that didn’t make it to the marketplace but had the potential they believed to be successful.

After contacting you, they ask questions concerning your invention and the process as far as how you came up with the idea and your experiences pertaining to the process of your journey while pursuing it. After that, they get a feel for you and your family structure, and in my case, they had me get some fire service professionals to say how my idea would be beneficial to the fire service industries. After reviewing your information, they narrowed it down to 16 inventions that would be featured on the show.

“When my invention was chosen, they came to my home and did a taping of my story as well as a taping of my prototype that I had with a local fire department, which gave its input on my idea. Then we went out to Los Angeles, Calif., where they did more taping and demonstrated a model — that the show had made for us — with a fire department there and had the firefighters talk about my invention and how it could be used within their profession.”

After that stage, Blocker said, “A few weeks later we went back to California where they had set up a meeting with an investor for you to pitch your idea for a potential investment to help get your product to market. The investor really liked my idea and the business plan that (my wife) Nevetta created and countered offer of $500,000 for 25 percent to $1,000,000 for 30 percent. We were the only ones on the show out of the 14 inventors who secured an investment for $1,000,000. My investor, Manny Fernandez, the co-founder of Dream- Funded, is located in San Francisco.”

Blocker has several visual aids, videotapes and sketches, and if readers would like more information, he invites them to email him at wkblocker3@gmail.com.

During the years of working on his invention, Blocker took breaks by spending time with family — including his and Nevetta’s two sons, Ryan and Caleb — and friends. He also enjoys fishing, with his biggest catch to date being a 9-pound largemouth bass. He plans to go again soon, and while Nevetta “hates fishing, she will often grab a book and come along” while he catches their dinner — mostly catfish — and dreams up more inventions.

A very big part of this whole process has been the continuing enthusiasm and vital support of Nevetta, said Blocker, adding that it was his wife who came up with the winning idea of introducing the Aqua Blaster to the “Make Me a Millionaire” TV show. So, the firefighters at the beginning of this article also owe a gallant tip of the helmet to Nevetta for her persistence in encouraging her husband to follow his dream.