Secessionists in the antebellum South invoked the slogan “King Cotton” to advocate establishing the Confederacy as a separate nation. 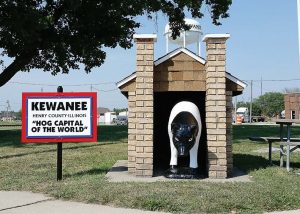 The “hog castle” marks the entrance of the small one-block downtown park that serves as ground zero for the annual Hog Days festival in Kewanee, Ill. (Photo provided by Larry Flannery) 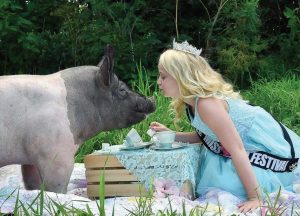 Kewanee, Ill., population 12,676, and its surrounding Henry County, use the phrase “King Hog” to summarize the role hog farming has played in their history and express the area’s earned reputation as “Hog Capital of the World.”

In 1947 the U. S. Department of Agriculture announced Henry County as “the greatest hog producing county in the United States,” and the good folks of Kewanee wasted little time capitalizing on the official bestowment.

That fall Kewanee hosted its first “Hog Day,” setting up livestock pens along a street in the town’s business district to showcase more than 150 of the best swine raised by area farmers.

Downtown streets were temporarily renamed after breeds of the livestock: Duroc, Hampshire, Yorkshire and others; a carnival was brought in; prize drawings were held throughout the day by local merchants; and the organizers held a hog calling contest.

The one-day event was repeated the next year before becoming a four-day event in 1949, held in late September. A decade later the festival was scheduled for the Labor Day weekend and has been held Friday through Monday of that holiday weekend for 63 years.

The Illinois House of Representatives entered the celebratory fray on March 23, 1949, passing a resolution to “publicly express our pride in the high honor the farmers of Henry County have brought to the state of Illinois.”

The resolution noted, “Hog producers from all parts of America attend the annual Hog Days celebration in the city of Kewanee, metropolis of Henry County, to pay tribute to His Imperial Majesty King Hog and to unite in hailing Kewanee as the Hog Capitol (sic) of the World.”

The resolution was drafted at the behest of State Rep. Frank P. Johnson, who addressed the assembly that initially greeted the resolution with “raucous laughter and derisive jeers.”

Rep. Johnson orated eloquently, though occasionally tongue in cheek, describing the importance of hog production for the town, county and state:

“I would not be true to my district or to His Imperial Majesty King Hog if I allowed those insults to go unanswered.

A herd of hogs runs down the street during the 1955 Hog Days festival. “We now give the hogs the weekend off and race the humans instead,” said Larry Flannery, cochairperson and treasurer of the annual event. (Photo provided by Larry Flannery)

Pictured is Illinois State Rep. Frank P. Johnson who made an impassioned speech on the importance of the hog industry to not only Kewanee, Ill., and Henry County, but to the state of Illinois, leading to the passing of a resolution naming Kewanee as the “Hog Capital of the World.” (Photo provided)

A competitor emerges from the muck after trying for a save during the Hog Wallow Mud Volleyball Classic, a Hog Days festival staple since 1983. (Photo provided by Larry Flannery)

Volunteers at Kewanee Hog Days have served up more than 2 million butterfly pork chops and pork burgers since the annual festival began in 1947. (Photo provided by Larry Flannery)

“It should not be necessary to remind you sons and daughters of Illinois of the significance of this great championship which the farms of Henry County have brought to our beloved state. The hog is the very foundation of Illinois prosperity and has played a vital role in the history, the economy and the development of this great state.

“Our pioneer forefathers who cleared the wilderness and conquered these prairies were nourished and sustained on a diet of hog and hominy. The boys in blue from Illinois who ran the batteries at Vicksburg, scaled the heights of Lookout Mountain and marched with Sherman to the sea were strengthened for those ordeals by rations of salt pork from the farms back home.

“We of this house take great pride in the ability of our illustrious speaker, the Honorable Paul Powell. Whence came those sterling qualities that have molded his granite character? He came from Johnson County where they weaned their babies on bacon rind and his youthful years were nurtured by a diet of hog jowls and turnip greens.

“We have praised our Illinois athletes for the great victories they have brought to our state — and rightly so. May I remind you that King Hog played an important role in those magnificent victories?

“We have been informed that the pictures of the (1949) Rose Bowl game (where Illinois’ Northwestern University defeated California 20-14) are to be shown to this assembly. Study these pictures and you will observe a pigskin in every play.

“And watch carefully for the dramatic climax of that historic game. That climax came when a blond-haired youth from Kewanee, Ill., the Hog Capital of the World, scampered over the California goal line (on a 45-yard run) for the winning touchdown.

“You can appreciate Eddie Tunnicliff’s magnificent achievement when you understand that the tender years of his youth were strengthened by daily breakfasts of Henry County bacon.

“And you, my colleagues from the great city of Chicago who grunted the loudest during the reading of the resolution, you in your innocence may cherish the delusion that you have little in common with the Illinois hog. I assure you that you do — plenty. Every city must have some economic justification for its existence. That was true in the ancient past and it is true today. Ships made Carthage. The wars made Rome. Beer made Milwaukee. Gold made Nome. Cotton built Atlanta. The harbor built New York. But good old Chicago was built on pork.”

Though the county no longer holds the status as the nation’s largest hog producing county in the nation — it ranks fourth in Illinois — the place the industry has held in the county’s history is indisputable and Kewanee’s Hog Days, which draws 50,000 visitors a year, shows no signs of abating.