A mayor’s dream of putting his city on the path away from dumping waste into landfills became a reality last month in Lebanon, Tenn., and the project is highlighting the success possible utilizing public/private partnerships to achieve sustainability goals and generate clean energy.

The result of over two years of logistical planning and building a local coalition for converting waste to energy, the new plant is the world’s largest downdraft gasification facility and the only one in America utilizing wood waste, scrap tires and municipal biosolids as a feedstock blend. The technology deployed by PHG Energy of Nashville had been proven in multiple previous facilities with over 50,000 hours of successful commercial operation.

One of the motivating drivers for the city of Lebanon, about 20 miles east of Nashville, was the scheduled closing of a major landfill in the area, one that has historically taken municipal solid waste from the city, as well as wood waste from area manufacturers.

“We talked to dozens of companies who had ideas and theories on how to help us,” Mayor Philip Craighead said. “When we met with PHG Energy, they showed us a process we could implement in stages and keep a solid financial base underneath us as we expanded.

“Plus they had the building and operating experience to prove their technology,” he added, “as well as the financial backing to remove risk to our city and its taxpayers.” Keeping the solutions financially self-sustaining was a mandatory part of the project, and raised the comfort level of city council members and public works professionals involved in the project.

The Lebanon waste-to-energy plant comprises less than 2 acres. The roof that you see is the building that holds the ORC generators and the power control room. The elongated blue structures in the middle of the photo are the bins that will house the feedstock. Next to it is a tall, round chamber —the thermal oxidizer — where the gas is combusted. Inside the structure with the yellow and gray steps is the 64-tonper-day gasifier, which is black, vertical and rectangular. (Photo provided)

The vertical, black four-story object with the structure around it is the 64-tonper-day capacity gasifier. When it starts up this fall, it will be the largest downdraft gasifier in the world. (Photo provided)

A partnership to solve a problem

Forming a public/private partnership with local industries was key in making the system financially attractive, according to PHG Energy spokesman and Chief Operating Officer Chris Koczaja. “Local companies were paying to have wood waste hauled to landfills. We developed a process whereby they paid tipping fees to the city to take the wood, lowering their costs and providing excellent feedstock for our downdraft gasification plant.” At the same time, Wilson County decided that several hundred tons of scrap tires they were paying to have hauled away each year could also be added to the gasification blend at considerable savings.

A critical element of the partnership is an independent commercial company that assumes all responsibility for collecting, transporting and preparing feedstock material to spec. From a nearby collection yard, they store and deliver wood and tire waste to the conversion plant in a consistent form as needed for operations. 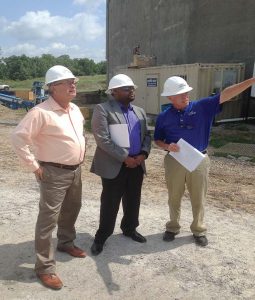 The $4.5 million gasification plant is located on the site of the city wastewater treatment facility, and the power produced is utilized “behind the meter” to offset power previously purchased from the local utility. As an added financial bonus, the treatment plant was able to retire a very power-hungry digestor unit since the biological material is being sent directly to the gasification unit. The technology will provide nearly 200 kilowatts net of clean power for the wastewater treatment plant — half the total load — while diverting at least 32 tons per day of waste material away from local landfills. The city’s plan is to implement a full MRF facility in coming years and deploy gasification of refuse derived fuel, or RDF, pellets and steam turbine generation capacity in the process, thus taking control of all its waste streams.

The overall objective of the plant is multifold. The energy created will provide clean, sustainable power for the WWTP while eliminating the hauling and spreading costs of biological sludge. It will also reduce the amount of municipal material hauled to landfills and tipping fees paid. The addition of scrap tires to the feedstock brings a beneficial use to an old problem. This new system will be financially viable and not a burden to taxpayers as it was when tipping fees were paid to commercial partners. And it will create a new infrastructure for future expansion.

The overall footprint of the gasification plant is less than one acre. In that space, the unit has a 64-ton-per-day capacity. Through the core technology of the PHG Energy downdraft gasifier, the syngas produced — 92 percent by volume input — is combusted in an industrial thermal oxidizer — an emissions control device. That thermal energy is transferred to heat water, and the hot oil drives a 400 Kw Organic Rankine Cycle generator. All feedstock is locally sourced and prepped by a specialty contractor. This company will ensure that wood and tires are cut to 1-inch to 3-inch size. Biologicals will be blended with that mixture on site. The target moisture content of the total blend is 30 percent. The blend will yield 8 percent biochar that is 70 percent carbon and recyclable. Commissioning of the plant will take place in October 2016.

When the plant is running at full capacity, 5,000,000 pounds — 2,500 tons — of carbon emissions will be kept out of the air each year, which equates to the CO2 produced annually to provide electricity to 312 homes, or the annual greenhouse gas emissions from over 450 passenger vehicles. More than 16,000,000 pounds — 8,000 tons — of material will be diverted from landfills each year, and this will help both the city and local industries move toward zero landfill goals. The system will create a positive use for more than 800,000 pounds — 400 tons — of scrap tires annually. And over 20 million kilowatt hours of renewable electricity, during the 20-year lifespan of the project, will be produced.

“This deployment of the patented gasification technology we invested years in developing is an excellent example of the benefits of scientific research,” said Dr. Deon Potgieter, Ph.D., theoretical physicist on PHGE’s staff and director of Research and Development. “In partnership with forward-thinking city officials like those in Lebanon, we have taken our tested and proven work into the commercial marketplace for the benefit of everyone.”

The project benefited financially from a $250,000 grant from the Tennessee Department of Environment and Conservation, and $3,500,000 in federal program financing that pays 70 percent of bond interest rates.