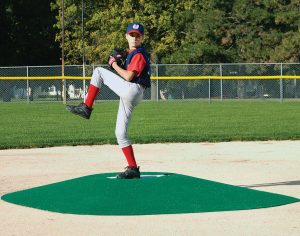 A young baseball player prepares to pitch on the True Pitch 202–6 Mound. True Pitch mound products are the only portable mounds approved by Little League for official game use. (Photo provided)

In 1962, John Goeders watched his son’s Altoona, Iowa, Little League team lose their first and only game at the Little League state tournament in Des Moines, Iowa. His son pitched from a baseball mound for the first time. Every pitch was wild. You see, his son’s team had played their league games on girl softball fields, so they were use to pitching on a flat surface and simply could not hit the strike zone during the tournament game. John concluded that his son’s team lost due to a lack of experience pitching from an actual mound. Determined to test his theory, he decided to develop a portable pitching mound for practice, which also replicated actual game mound pitching experience. True Pitch Inc. was born.

John developed several models of fiberglass pitching mounds and tested them at high schools and colleges throughout his native home state of Iowa to great results and demand. He applied for his first mound patent in 1966 and was approved by the United States Patent and Trademark Office in 1969. John continued to refine his mounds and in 1972 earned a coveted endorsement from Little League Baseball.

Today, nearly 50 years later, True Pitch is still located in Altoona, Iowa, and has mound products in use around the world. In America alone, True Pitch mounds products are the preferred choice of discerning parks and recreation facilities, high schools, colleges, indoor sports facilities and tournament ball fields. Its products are distributed through many channels, including Athletic Dealers of America, Sports Inc., M.A.S.A., BSN Sports and On Deck Sports, to name few. In 2015 True Pitch developed a direct relationship with Wal-Mart, which allows direct-to-consumer purchasing of select products with free or nominal shipping rates.

The company is headed by Dennis Goeders, the son whose team lost the Little League state tournament game in 1962. He leads a highly experienced and dedicated sales, marketing and administrative staff, who have helped make True Pitch one of the best — if not the best — brands in the portable baseball mound industry. Considered by many the portable mound industry pioneer, True Pitch holds 40 patents and trademarks on various products. The company offers a product line of 10 portable game and practice mounds as well as numerous field products, including Flex-A-Clay, a specifically formulated and processed dry soil composition that creates a safe playing field with great traction.

True Pitch also enjoys professional baseball endorsements and even has a connection to Hollywood. Its mounds were first endorsed by Bob Feller, the Cleveland Indians pitching legend, and Pee Wee Reese, the 10-time All-Star Baseball player and Hall of Famer. You might also be surprised to know that their Flex-A-Clay product was featured in the major motion picture film “Field of Dreams,” starring Academy Award winner Kevin Costner.

John Goeders passed away in 2013. He saw his dream fulfilled of creating products to help perfect the pitch of baseball players, and leaves a legacy that will impact the game of baseball for generations to come.

Flex-A-Clay is another product offered by True Pitch. It is a specifically formulated and processed dry soil composition that creates a safe playing field with great traction.

A ballplayer spreads Flex-A-Clay in the area of the batter’s box and home plate. (Photo provided)

For more information about True Pitch mounds and field products, visit them at www.truepitch.com or call (800) 647-3539