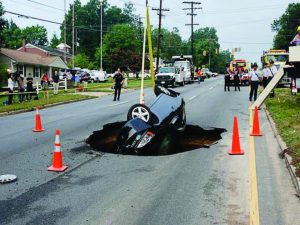 In the early morning hours of July 18, 2007, a 15-foot-by-24-foot sinkhole opened in Wendover Avenue in Greensboro, N.C., swallowing a Honda Accord and making necessary a pipe replacement project. (Photo provided)

In the early morning hours of July 18, 2007, a 15-foot-by-24-foot sinkhole opened on Wendover Avenue in Greensboro, N.C., swallowing a Honda Accord. The sinkhole was caused by a 12-inch cast-iron water main that broke, eroding the earth beneath the road with 1,500 to 2,500 gallons of water a minute. The main was constructed in 1929 and, after nearly 80 years of service, proved its replacement value that morning.

But traditional dig and replacement methods of replacing water lines require excavating a trench the entire length of the project. The Greensboro Water Resources Department estimated that replacing 3,000 feet of the water line would cost over $1.3 million and take six months, disrupting traffic on one of the city’s busiest streets for much of that time.

The department began to explore newer techniques to repair the line. One method is pipe lining, a process that involves scraping deposits from the interior of the pipe and then coating it with an epoxy lining to prevent further corrosion.

Pipe bursting is another new method of replacing underground water and sewer pipes without excavating the entire line. In this process, only two holes are dug: at the beginning and the end of the section to be replaced. A steel cable is run through the pipe and attached to a bursting head, a metal cone slightly larger than the diameter of the old pipe. The new pipe, of ductile iron or fusible PVC, is attached to the bursting head. Then the head is pulled through the old pipe by a powerful hydraulic pulling system in the receiving pit. The bursting head breaks open the old pipe and pulls the new pipe after it.

Faced with the prospect of closing a major thoroughfare, Greensboro Water Resources initiated a pilot project to test pipe bursting as a method for replacing water lines.

Robbie Bald, engineering supervisor with GWR, explained why the project was so unique.

“For one, we were using a nonstandard product for us, (fusible PVC). Traditionally, all of our water lines have been iron. Another was the fact that we had not done any static bursting on the sanitary system. It had all been pneumatic, so we were using a new process: and then also the fact that we were using a trenchless rehabilitation method on water lines. We had never done that before — it was always traditional dig and replace. So we did three new things. It was an acceptance not only of the process but the product, because we’re a ductile iron town. So it was a matter of proving that our maintenance guys could be comfortable with PVC as part of a replacement program.”

They started small, bursting and replacing a 1,200-foot 4-inch cast-iron water main in a residential neighborhood. The department chose to replace the old main with a 6-inch fusible PVC pipe. The installation of the new line was deemed a success, and the pilot project moved on to its next stage: replacing the much larger and longer water main under Wendover Avenue.

At the beginning of the larger project, the department utilized another new technique: directional drilling, a technique of drilling holes horizontally underground. The city chose to install an additional 1,400 feet of 4-inch PVC pipe alongside the old iron pipe as a bypass to supply water to homes and businesses.

Once the bypass line was installed it tackled the bursting of the 80-year-old 12-inch cast-iron water main. Crews worked 24 hours a day in 12-hour shifts over three four-day weekends to burst the old main and replace it with a new ductile cast-iron pipe. Intersections where 6-inch pipes carried water from the main were excavated and replaced as the new pipe reached them.

This is one of several standard cutter heads used in static bursts. It can be used for both fractable and nonfractable pipes. (Photo provided)

A piece of the old cured-in-place pipe is pulled back into the pit on the pulling side of the process. There is a steel plate that breaks the CIP as it gets to the machine. (Photo provided)

The pipe is attached to the bursting rods as it’s pulled back into the old CIP line. (Photo provided)

The new PCV comes into the receiving pit. (Photo provided)

The trenchless pipe bursting project proved to be cheaper, quieter and less disruptive than traditional dig-and-replace methods. The city spent $770,000 on the project, saving about $500,000. Instead of taking six months and closing a busy road, the job was completed over three four-day weekends.

Static pipe bursting is now the primary method of replacing pipes in Greensboro.

“There have been a couple of cases when we have gone in and done a traditional dig and replace,” Bald said. “But almost 90 percent of the time our replacement program is utilizing the static pipe bursting.”

Pipe bursting is not always cheaper than dig and replace, however.

“A lot of times it’s a little more expensive,” explained Bald. “But the impact to the residents and the traffic and everything else more than makes up for the cost, because the social cost is a lot less with the pipe bursting… it’s a lot less intrusive.”

The process can also be much faster.

“I can put people on temporary water, get the pipe burst and turn it back on much quicker than I would if was doing traditional dig and replace. It probably cuts our time in half.”

Other communities have taken note Greensboro’s success with pipe bursting.

“With what we have done, certainly in North Carolina, fusible PVC has seen the light of day. We’ve had people from not only in state but out of state come up and look at our program. D.C. Water has been down to look at the process, and Raleigh is looking at it. So we’ve had quite a bit of interest. There’s been an expanded use statewide with it as a result of what we’re doing.”

Bald does not hesitate to encourage other municipal water departments to explore trenchless replacement methods.

“If you haven’t considered static pipe bursting, whether you’re using fusible PVC, HDPE or ductile iron pipe, it’s something you ought to consider. Given the experience we’ve had, we’ve proven that one, it seems to be relatively cost effective. The semi-trenchless method certainly has less impact on residents, traffic and everybody associated with it. You can be comfortable based on the experience we’ve had and should get good results provided you have good contractors. We’re supporters of it, and that’s why we’ve been more than willing to have people come in and look at it.”