Ever since a derailment and fire that occurred in Lynchburg, Va., on April 30, 2014, Battalion Chief Robert Lipscomb has been traveling across the U.S. giving talks about what the Lynchburg Fire Department learned from the experience. 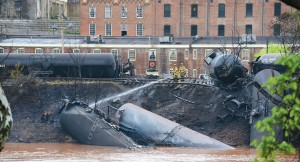 Lynchburg, Va., firefighters make sure all flames are out after a CSX train containing thousands of gallons of Bakken crude oil derailed in downtown Lynchburg in the middle of the week in 2014. Fortunately, there was no damage to city property or nearby businesses. (Photo provided)

In that incident, 17 cars of a 105-car tanker train carrying about 3 million gallons of crude oil jumped the tracks, sending up black plumes of smoke. Three of the cars careened into the James River. There were no injuries, but what made Lynchburg’s derailment significant was the location and time of the event: downtown, at about 2 p.m. on a Wednesday afternoon. Fortunately, there was no city property damage, but there was some contamination of the water.

As in other communities where a derailment has occurred, determining what was on fire, how many cars were involved, assessing the scope of the emergency and swiftly evacuating the area were responders’ top priorities. Immediately setting up an instant command system was also critical: in this case, a much-expanded ICS.

“Our public information officers were fielding inquiries all over the globe — and this went global pretty quickly,” Lipscomb remembered. Locations as far-flung as Algeria and Dublin, Ireland, reached out for information, demonstrating the extent of the debate about transporting Bakken oil by rail.

Since the time of the Lynchburg derailment, railroads have set up a system that first responders can access, which includes the contents of each car. CSX was the first to do so.

Knowing what each car contained would have been extremely helpful in the moment, Lipscomb said.

Because of the timing of the derailment, fire administrators were working and available — unlike at Watertown, Wis., a small town where a crude oil shipment derailed last year. At Lynchburg, fire administrators also brought in a civilian employee who deals with finances for the purpose of tracking costs while on the scene. Lipscomb learned that it’s important to have all of these relevant individuals as part of a department’s ICS, and to have seconds-in-command in case the initial person is on vacation. People need to be involved who wouldn’t normally be involved in an average disaster call.

In particular, having that person to track costs and one who understands the proper forms, as well as the Federal Emergency Management Agency’s schedule of reimbursements, is important. Lynchburg’s person tracked overtime hours, apparatus use hours and costs for incidentals like cases of Gatorade or water and buckets of sand. Any expense dealing directly with the incident is reimbursable.

“I don’t know how many jurisdictions have this, but we have a unique code for incidents and all the money spent for that incident — whether it’s a blizzard, a storm or a derailment — is listed under that code so they just have to add up one column,” Lipscomb said.