Two public-private partnerships in the Midwest have addressed a local fire department’s concern as well as a cultural component of one firehouse neighborhood. 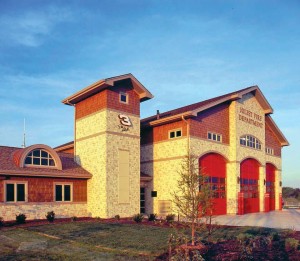 A NASCAR-themed fire station in Joliet, Ill., was facilitated by a donation of land from the Chicagoland Speedway. (Photo provided)

Joliet, Ill., is home to NASCAR-themed Fire Station No. 3, said to be one of few like it in the nation. The $1.6 million station opened in 2013 at 450 Laraway Road to help provide coverage on the south side of town, according to Chief Joseph Formhals. There existed a duplication in coverage with the station’s original location, 319 Grove St.

A federal grant made it possible to relocate Station No. 3 near the Chicagoland Speedway racetrack, which better served the needs of the community. The move helped the station improve response times, positioned it to better handle future growth and eliminated duplicated coverage in some areas between stations No. 1 and No. 3.

City officials used a combination of the grant, a $100,000 contribution from CenterPoint Industries and land donated by the speedway to build the station. The city’s portion of the project totaled about $492,815.

A relationship with the Dale Earnhardt Foundation proved to be fruitful, too. The foundation’s mission is to continue Dale’s legacy through charitable programs and grants that sustain his lifelong commitment to children, education and environmental/ wildlife preservation.

Formhals said a few of his colleagues approached foundation officials about using Earnhardt’s trademarked number, three, on the exterior of the facility. The foundation agreed. The “3” located on the station tower is designed to look the same as the number three on Earnhardt’s cars. A likeness of his signature is beneath the number on the tower.

What followed was a good working relationship with the track, Formhals said. He noted that Station No. 3 paramedics staff many of the events at the racetrack, so it’s been great exposure for his fire station and for firefighting in general. 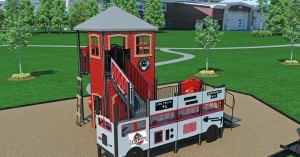 A firefighter-themed play pocket coming to Greenwood, Ind., and located near Fire Station 91 will encourage play and expose children to the firefighting profession. (Photo provided)

The Greenwood Fire Department, in the city of Greenwood, Ind., jumped behind the wheel in a different way last year to head off future personnel shortages. It’s reaping the rewards of a partnership with the Greenwood Parks Department and Greenwood Rotary Club, which are coming together for a special initiative to encourage recreation and expose children to firefighting from a young age.

According to Fire Chief James Sipe, the city has plans to construct a firefighter-themed “play pocket.” A play pocket is a small playground with an educational theme that’s often near a trail. This one will be located in a park adjacent to Fire Station 91. It will be two stories high, feature two slides and be customized for the department. The project’s footprint will be about 40 feet by 60 feet and will be scalable as well.“Once we establish the main piece, we can grow it along the trail,” Sipe said.

The design will mimic fire engines, with a similar layout, colors and graphics. The hope is to encourage children to play the role of firefighter, as well as to encourage play in general.

“It will have two to three items to give kids and parents a discussion topic,” he said.

The fire department’s portion will come from the Greenwood Fire Foundation, a 501c3 support group of the department whose mission is to “enhance public education and community awareness of safety and wellness issues such as fire prevention, emergency medical issues, CPR and first-aid training, home safety and proper child car seat use.”

“We are fortunate to have many service-based organizations looking to improve quality of life (in our community),” Sipe said about Rotary’s investment.

Regarding that investment, Chief Sipe anticipates both an instant and long-lasting return.

“Kids that play on that playground one day will work in the fire station,” he said.

The play pocket will take about 10 weeks to build and should be ready by spring or early summer.