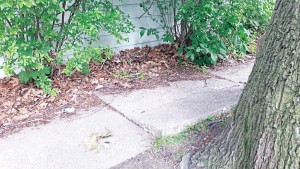 A sidewalk in Ithaca, N.Y., heaved up, most likely from the tree’s roots. Prior to the city’s enacting a Sidewalk Improvement District, the property owner would have been responsible for the cost of replacing or repairing the sidewalk. (Photo provided) 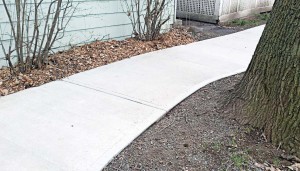 A sidewalk in Ithaca, N.Y., heaved up, most likely from the tree’s roots. Prior to the city’s enacting a Sidewalk Improvement District, the property owner would have been responsible for the cost of replacing or repairing the sidewalk. (Photo provided)

There’s a popular holiday song that starts by describing a city sidewalk bustling with activity. Even though the holiday season is over, does such a scenario describe your city’s sidewalks?

Whether yours are filled with activity or not, they still need to be maintained. What is the procedure for scheduling sidewalk maintenance? Do you wait until there’s a problem to respond?

According to Jason Weiss, geospatial manager for Omni Associates in Appleton, Wis., if your answer was the latter, you’re not alone.

“I’ve found there are very few municipalities that have regular inspection schedules,” Weiss said. “Most wait ‘til there’s a problem and seem to be playing catch up. When someone trips and falls, they send someone out to inspect and then get it on their schedule.” Only a few go out ahead of time and survey defects. 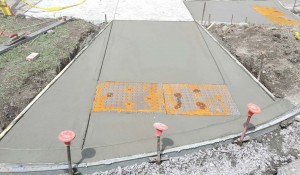 Weiss has spoken publicly about the Geographic Information System Omni developed for the city of Fond du Lac. It was created using off-the-shelf software and customized for the city’s work flow processes.

The GIS works with a mobile Global Positioning System to manage the city’s sidewalk maintenance schedule. Someone goes out and inspects sidewalks, recording the GPS coordinates to the GIS software. The worker also takes pictures and uploads them. Over the winter, when cold and snow make getting out in the field more difficult, the data is used to prepare inspection reports and establish priorities. A list of defects is generated and Omni gives cost estimates for repairs.

Paul DeVries, city engineer for Fond du Lac’s engineering and traffic division, said there’s a plan in place so that at least every 12–15 years each part of the city gets inspected and surveyed. In-house inspectors look for things like trip hazards, cracks, holes and drainage issues.

“But if someone has an issue, they can call and we send someone out and put the defect on the next year’s program. If it’s bad enough, we’ll make a temporary fix,” DeVries said.

Both Weiss and DeVries noted there hasn’t been a lot of innovation when it comes to sidewalk maintenance over the years. But DeVries shared a couple of fairly new practices that have been helpful in cutting costs.

One method is the shaving of sidewalks. It requires contractors with special equipment that can grind off some concrete, if the difference is an inch or less.

“It’s about half the cost of replacement,” he said.

The other technique is called mudjacking, or slab jacking. Grout is poured into holes cut in the concrete to raise up the sidewalk and make it level.

Another issue that Fond du Lac had was sidewalks, built over utility trenches, collapsing.

“The sidewalk ends up dipping, so now we’re putting in rebar to keep it from sinking in. It helps stop the problem from spreading to the next square,” he explained.

Ithaca, N.Y., Mayor Svante Myrick was the youngest African-American elected in United States history when he took office in 2012. While campaigning door-to-door, Myrick repeatedly heard concerns about sidewalks: When elected, he and City Attorney Ira Lavine developed a program that greatly improved them. (Photo provided)

According to the Federal Highway Association, many maintenance issues that occur with sidewalks could be reduced with proper planning in the development phase. Even with the best planning, though, sidewalks don’t last forever without maintenance.

Properly maintained sidewalks are essential to the safety of residents, encourage use of designated routes, such as Safe Routes to School, and ensure ease of use for citizens and visitors. Under Title II of the American with Disabilities Act, anything that is required to be accessible must also be maintained in operable working condition.

For a maintenance program to be effective, it must be able to identify conditions that can impede access and quickly respond to rectify those defects. According to the ADA, accessible sidewalks means those that are at least 3 feet wide and not blocked by items like vending machines, benches, newspaper dispensers, trees or plants.

Because some standards changed in 2010, if an entity was in compliance based on 1991 standards, it doesn’t have to make changes until alterations are done. So if a section of sidewalk is not currently 3 feet wide, when it is replaced all ADA standards must be adhered to at that time. Resurfacing a street has been considered an alteration so that’s when detectable warning curbs should be installed. 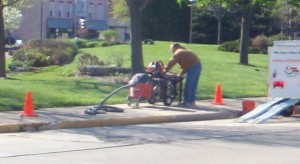 A section of sidewalk on Macy Street in Fond du Lac, Wis., is ground as a means of repair rather than having to replace the whole section. City Engineer and Director of Public Works Paul DeVries said using this method of maintaining walks has been a big cost savings for the city. (Photo provided) 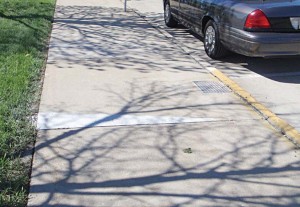 A section of sidewalk on Macy Street in Fond du Lac, Wis., is ground as a means of repair rather than having to replace the whole section. City Engineer and Director of Public Works Paul DeVries said using this method of maintaining walks has been a big cost savings for the city. (Photo provided)

In Fond du Lac, property owners are 100 percent responsible for the cost of repairing and replacing the sidewalk. Weiss said that across the country, who the responsible party is varies.

According to an article titled “Fixing Broken Sidewalks” by Donald Shoup, a survey of 82 cities in 45 states found that 40 percent required property owners to pay the full cost of repairing or replacing sidewalks; 46 percent shared the cost; 13 percent paid the full cost to repair a sidewalk.

Most property owners contract the work done through the department of public works. In some cases, they can finance the cost through additional assessments on their property taxes.

Sidewalk Improvement Districts are gaining attention. Also, GIS data collection has potential for Web-based reporting by citizens of potential problem areas. Online reporting potential is something that Fond du Lac is working on, together with Omni Associates.

“Online Web-based GIS is taking over, especially in municipalities. I can see this migrating in that direction where residents can bring up a map and report a defect or see if it’s already been reported,” Weiss said.

Having the GIS has cut down on the number of complaints in Fond du Lac by 90 percent — especially when the clerks can bring up a photo in the system showing the defect, Weiss was told. Being able to implement the system for more than one department is a savings for the city as well.

DeVries said when it comes to GIS and its capabilities, “I can see this growing more and more every day.”