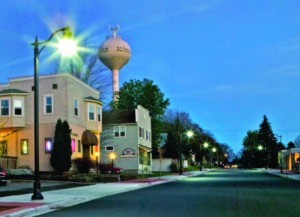 Outdoor LED luminaires are now being offered in a variety of form factors, including period-style teardrops such as the ones used in Rothschild, Wis. (Photo provided)

The scenic village of Rothschild, Wis., sits along the tree-lined shores of the meandering Wisconsin River and serves as home to nearly 5,000 people. Like many small towns, over the years the village’s infrastructure had deteriorated and foot traffic in its business district had diminished. The village launched a streetscape project in 2010 to rejuvenate historic Brown Boulevard and boost patronage to its array of businesses. While Brown is not a main artery for the village, it is a landmark and connects drivers to a major highway.

“Brown Boulevard was poorly illuminated for both vehicles and pedestrians,” Vergara said. “The village implemented the streetscape project to increase light levels on the streets and sidewalks while creating a sense of yesteryear, which was important since Rothschild was founded in the early 1900s.” 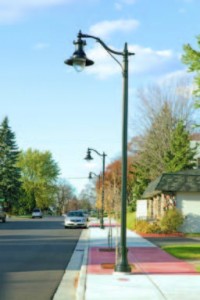 The project included construction of new 5-foot concrete sidewalks — some with color — and installation of tree planters and decorative tree grates. Nine historically styled teardrop LED luminaires are used to illuminate the area and reinforce the impression of days gone by. The fixtures replicate the street lights that graced American downtowns during the first half of the 20th century and combine high-performance optics with rugged diecast construction.

“Village officials had a goal to make Brown Boulevard more inviting, while saving energy and reducing maintenance,” Vergara said. “The challenge was how to incorporate modern technologies into a streetscape designed to duplicate earlier days, while avoiding an overlit appearance.”

Daryl Peterson, project engineer, said his firm originally considered installing 12 luminaires along Brown Boulevard. The number was reduced to nine because of concern the illumination would be overwhelming.

Teardrop LED fixtures are spaced 80 to 100 feet apart, with pole spacing varying to accommodate tree planters and driveways. Five luminaires were installed on the north side of the boulevard and four on the south side, mounted on 18-foot fluted decorative poles with a 17-inch base. The poles include a dovetail track for modular accessory attachments, which can be added at a later date.

Illumination levels range from .8 to 1.4 footcandles, with a 4.0:1 average to minimum.

“Visibility is greatly improved — especially for drivers who now have greater depth perception,” Peterson said. “Many people have commented that they prefer the white light over the yellow illumination from the high pressure sodium system because it makes them feel safer.”

One of the project challenges was to limit glare on the adjoining major arterial, which is located down gradient from Brown Boulevard.

“The teardrop LED fixtures eliminate much of the side glare associated with other lighting systems — even those with shields,” Vergara said. “Yet, they provide the light coverage needed for drivers and pedestrians.” 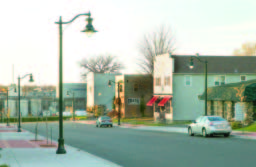 LED luminaires such as these installed by the village of Rothschild, Wis., can save 50 percent or more in energy costs over traditional high-intensity discharge light sources. (Photo provided)

Fixtures are illuminated from dusk until dawn and controlled by photocell. The village will inspect and clean the luminaires every autumn and spring.

“We anticipate much less maintenance than with the high pressure sodium system,” Vergara said. “The teardrop LED fixtures are a beautiful addition to Brown Boulevard, and the simple use of channels on the poles gives us the flexibility we need to add arm accessories in the future.”