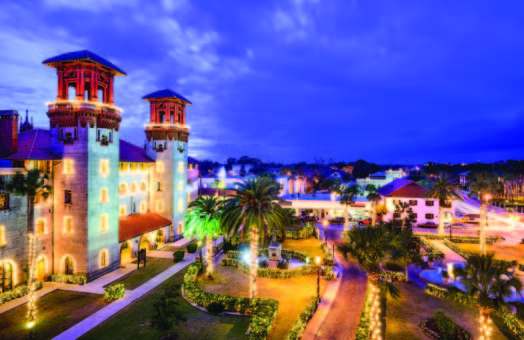 The entire historic district of the seaside colonial settlement of St. Augustine, Fla., decks out in white lights from before Thanksgiving through January. The beautiful displays and accommodating local businesses have had the effect of prolonging the city’s tourism season. (Shutterstock photos)

Most city festivals run for a day or a weekend. A few stretch out longer, occasionally a week or more. But St. Augustine, Fla., the nation’s oldest city, may well have the longest holiday celebration in the United States. The city’s Nights of Lights commences the Saturday before Thanksgiving and runs through the end of January.

During that time, it’s bedecked with more than 3 million tiny white lights draped from buildings, trees, bridges, light poles and every other opportune venue. Accompanying the ubiquitous display of festive brilliance are tours, entertainment and fine dining throughout the area. Horse-drawn carriage rides, boat tours and guided walking tours are offered nightly, and holiday trolley rides are available through Jan. 3.

Municipal government, business and private citizens all get in on the act of decorating the historic district of St. Augustine, Fla., with tiny white lights during the holiday season. Trains, trolleys and specialty tours add to the experience. (Photos provided)

Also folded into the celebration are an arts and crafts festival, Christmas train rides sponsored by Ripley’s Believe It or Not!, free drive-in movies, concerts at the local amphitheater and a 5K run.

Paul Williamson, St. Augustine’s director of public affairs, has been involved in Nights of Lights for the last 15 of the festival’s 22 years. “All we do is decorate a city that is beautiful anyway,” he said.

Aside from St. Augustine’s aesthetic attraction — “One of the nicest things to do here is simply walk around the city,” Williamson said — the festival provides pragmatic benefits.

St. Johns County attracts more than 3 million overnight visitors a year. Almost all of them stay in St. Augustine, a city of less than 14,000. “We figured we could stretch our visitor season by having this umbrella event,” Williamson said.

The city drapes the lights on public property and local businesses and homeowners who “don’t want to be in the dark” follow suit.

“What really makes it work is the community steps up and decorates their own properties at their own expense.”

A private contractor decorates the hundreds of unique buildings, arches and other structures in the city’s historic district. By local ordinance, lights fixed more than 10 feet above ground can be kept in place year-round. Lights lower than 10 feet from the ground must be removed at the end of the festival and restrung the next year.

The contractor inspects the lights and the timers every day during the festival as the lights are draped in more than 100 locations. Other, as needed work, involves repairs from vandalism, wind damage and etc. The timers are synchronized so all the lights come on at the same time.

“If it is not seamless, it doesn’t have quite the same effect,” said Williamson.

The city’s financial investment is minimal: paying the contractor and spending about $25,000 a year on replacement materials. The visitors bureau does all the promotion, and organizations pay for their own municipal services during the many events associated with the festival.

Williamson attributes the success of Nights of Lights to the “real partnership” between the municipality and private organizations, and to the city being “a very lovely place. It’s like a little theme park that people live in,” he said.