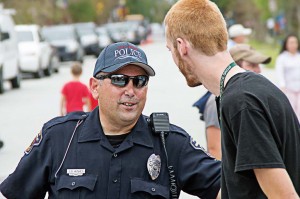 The Data-Driven Approaches to Crime and Traffic Safety operational model, according to DDACTS Operational Guidelines, is supported by a partnership between the Department of Transportation’s National Highway Traffic Safety Administration and two agencies in the Department of Justice: the Bureau of Justice Assistance and the National Institute of Justice. By integrating location-based traffic crash, crime and calls for service and enforcement activity, law enforcement departments throughout the country gain information that enables them to identify and staff the most dangerous intersections, high-crime locations, zones of increased DUI incidents and more. The usual response is high-visibility, strategic presence in specific, identified areas. This activity, strategically planned and executed, achieves the goal of reducing social harm in communities.

DDACTS builds on more than 35 years of research illustrating the residual crime control and traffic safety benefits that result from data-driven, strategically directed traffic enforcement. One of the key elements of the DDACTS model is the nexus, or relationship, that exists between the incidences of crime and traffic crashes. In other words, the application of highly visible traffic enforcement is a proven and effective strategy that addresses both crime and crashes whether they occur simultaneously or independently in time and/ or location.

The relevancy of the data, obtained via temporal and spatial analysis, has drawn numerous towns and other cities to implement the model in the last few years.

Time and pace based policing, “… as opposed to [traditional] person- based policing, is more efficient as a focus of law enforcement actions; provides a more stable target for law enforcement activities; has a stronger evidence base; and raises fewer ethical and legal problems.” That opinion, from the document “Ideas in American Policing Number 9” by David Weisburd, has gained tremendous legitimacy over the last several years. 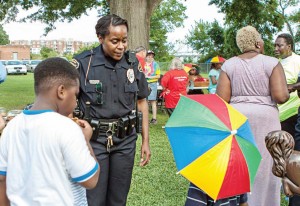 When the New Bern Police Department first learned about the principles of DDACTS, it was already modeling community policing philosophies that emphasized partnering with community members to solve problems within its jurisdiction.

“… We viewed this as an opportunity to combine evidenced based policing and community policing to address crime and social harm within areas of the city,” said Intelligence Detective S.C. Brown.

New Bern fully implemented the DDACTS model a few months ago. The department believes the evidence-based data will assist in increasing personnel deployment during certain times and places that are unique to the city.

“DDACTS is not based on race, social or economic status or national statistics. We’ll use the data to specifically target ‘hot spots’ where criminal activity and traffic incidents occur most, then focus on highly visible strategies to reduce those numbers,” said Brown.

A starting point for long-term change 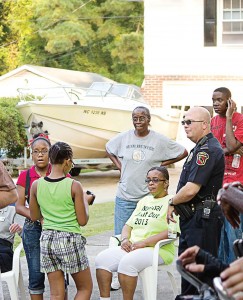 Lt. Mark Von Behren, New Bern, N.C., interacts with members of the North Hills community. Members of the public may be able to add data or other information relevant to the DDACTS model, promote the initiative and can express their reaction to the increase in enforcement. This support encourages the use of DDACTS as a strategy to improve the quality of life in neighborhoods that suffer from high crash and crime rates. (Photo provided)

Implementation of the DDACTS model directs law enforcement professionals toward a more evidence-based approach to the deployment of personnel and resources. It usually does not require the hiring of additional personnel or the purchase of new equipment and can be supported by current staffing.

New Bern departmental staff and employees attended a DDACTS implementation workshop and a strategic analysis training course, both presented by the International Association of Directors of Law Enforcement Standards & Training organization, in advance of the model’s deployment. In addition, more officers went to a one-day workshop last fall also hosted by IADLEST using funds received from the National Highway Traffic Safety Administration. They, too, learned how to implement the model and maximize its benefits. The crime analysis team participated in a two-day course to learn crime analysis and mapping techniques.

The NHTSA, BJA, NIJ and their partners believe that several presumptions support the necessity for implementing DDACTS:

As law enforcement agencies implement DDACTS, information-sharing sessions with local partners and stakeholders are recommended to “reinforce the collective ownership.” Stakeholders may be able to add data or other information, promote the initiative and provide feedback on the community’s reaction to the increase in enforcement, for example. As the shortage of law enforcement resources continue to challenge police agencies, partners and stakeholders can support and encourage their police administration to explore DDACTS as a strategy to improve the “quality of life in communities that suffer from high crash and crime rates.”