According to Greg Barnes, assistant superintendent of Wilmington Municipal Golf Course, there have been several instances over the decades of that region in North Carolina being affected by bouts of snow, ice and flooding due to heavy rainfall.

“But we have hard-core golfers who have quite frequently begun to play in the rain, and I’m not talking about a drizzle,” said Barnes.

“Also, in this region, after a tropical storm — or God forbid, a hurricane — they’ll show up, look at the damage and ask, ‘How long do you think it will be before we can get back out?’” 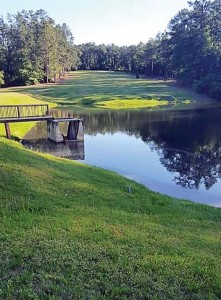 Municipal golf course professionals and managers of Midwestern and northeastern states might envy their southern and eastern counterparts, because the latter are subject to fewer unwanted gifts from Mother Nature. However, those “lucky” links have their own weather woes, which arrive in the form of tropical cyclones, hurricanes, ultra-strong winds and, once in a while, a cold front that these “tropical” courses are ill-prepared to tough out.

Any of those disasters take a huge bite out of municipal pockets by shutting down courses, while the superintendents chew through pencils trying to find money in the budgets to get them open again.

In 2014 Chicago municipal golf courses slogged through heavy snow and ice and a nippy spring, all of which turned the area brown and made it difficult to keep the greens playable. The North Shore Country Club in Glenview, Ill., managed to limit damage by using plant protectants and removing snow and breaking up ice in February.

Some courses are more severely damaged by ice encasement, which limits oxygen to the turf, and toxic gases build up, killing the grass.

In Minnesota, municipal golf courses can be devastated by a rainy weekend. A month of rains can deter putters who were debating a membership to a golf course. 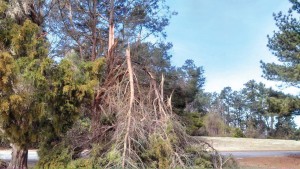 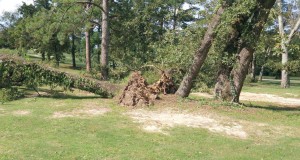 When extreme weather hits the Brown Deer Municipal Golf Course in Milwaukee, Wis., the municipal course is fortunate to have the assistance of a forestry department that will lend a hand to cleaning up the greens and fairways. (Photo provided)

Bryan Luedtke, Professional Golfers’ Association of America head golf professional and recreation supervisor at Bunker Links Municipal Golf in Galesburg, Ill., noted some of the steps his course takes when it runs into bad weather.

“We send part-time golf shop staff home early, which costs us about $175 per day. We also cancel orders of golf shop merchandise, such as balls, gloves, accessories, golf shirts and other apparel, depending on how bad the spring is,” he said. “This can run approximately $1,000-$3,000. We may also reduce chemical applications on the course, which could run $5,000-$10,000.

“Part-time maintenance staff would be sent home early, at a rate of $320 per day. But our ‘Golf & Cart’ specials would help with volume and hopefully create $1,500 per day in additional revenue.”

Chet Hendrickson, PGA golf services manager of Brown Deer Golf Course in Milwaukee, Wis., was fortunate: After a bad weather event did damage at Brown Deer, he did not have to hire outside personnel to restore the links to playable condition.

“We have a forestry department, on top of our golf course crew, to restore any damage.” Hendrickson added that every year, “at least one of our courses will be closed for a day or two while drying out after heavy rains. As for a guesstimate of cost, it really depends on the course, day of the week and time of year. Worst case scenario: A one-day course closure could cost in excess of $10,000 at some of the bigger courses. Add another $2,000-$3,000 for concessions.

“Often the courses will reopen without the option of motor carts due to soft turf, and late in the fall we will shut down if temperatures get too chilly.”

But then again, diehard golfers come out in the rain anyway.

“All the time. We have found that if there is no snow on the ground and it’s in the 30s without any wind, we’ll get 50–100 golfers to show up at a couple of our courses,” said Henderson.

“The city hired outside personnel for us during that ice storm,” said Spencer. “We also lost a lot of playing time during the 100- plus degree heat waves (that year) — usually between the hours of 1–3:30 p.m.

“We run special golf rates during those sweltering hours to try to draw them to the golf course, but from my experience, it’s usually pretty dead around that time. We probably lose $200-$300 during those peak hours.”

“If we have storms or whatever weather calamity that forces us to close the course, we just go by what has been done in the past.” He added that he does not allot a specific part of the budget for weather-related closures.

Although golfers at the Henderson Municipal Golf Course in Kentucky enjoy year-round playing, they were surprised last winter by a snowfall that closed the course for four days, according to Todd Norman, general manager.

“We lost maybe $100 for those four days, but we also don’t do a whole lot of anything during the winter,” admitted Norman.