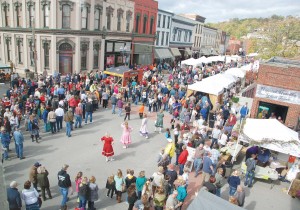 What makes them unique is their collaboration in highlighting each others’ artistic attractions along a 50-mile corridor of Missouri Route 79, the scenic asphalt umbilical cord that connects the municipal siblings.

Twice a year, during the last full weekend in March and the first full weekend in November, artisans from the three towns organize “50 Miles of Art,” a showcase of artistry reflected through the prism of each town’s unique personality. Drivers can meander along Route 79, stop in the municipalities’ downtowns to tour studios, browse outdoor displays and enjoy the multifaceted art created by local denizens.

The autumn installment of 50 Miles of Art is the more popular excursion. Though attendance figures are difficult to nail down, it’s fair to say several thousand patrons take advantage of the trifecta of gatherings that will happen this year on Nov. 7–8.

It comes together under the aegis of the nonprofit Hannibal Arts Council. Michael Gainer has been executive director of the council for 22 years. 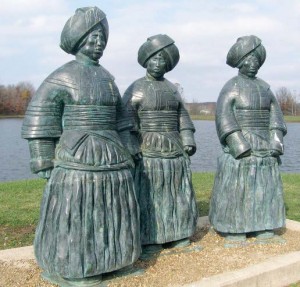 “I’ve seen the creation of 50 Miles of Art,” he said. “The idea started in two artists’ minds: Steve Ayers, a local potter from Hannibal, and John Stoeckley, an artist from Louisiana.”

The two men loved living here and raising their families here, Gainer added, and they wanted to invite more artists to live in the area. That confluence of common need, regional support and official state recognition gave birth to the festival.

Each of the communities had empty buildings downtown for which they were in search of viable economic development alternatives.

“Fortunately, there was a real good regional development director,” Gainer noted. “Businesses and the economic development office put time and effort into it.” At the same time, the state officially designated Route 79 as “Missouri’s First Scenic Byway.” That flipped the “on” switch. “The three communities saw the link,” Gainer said.

None of the municipalities make a financial commitment to the showcase, but local leaders lend their support with municipal services wherever they can. And for two weekends every year, Clarksville, Louisiana and Hannibal unite as a family to draw visitors that benefit them all. 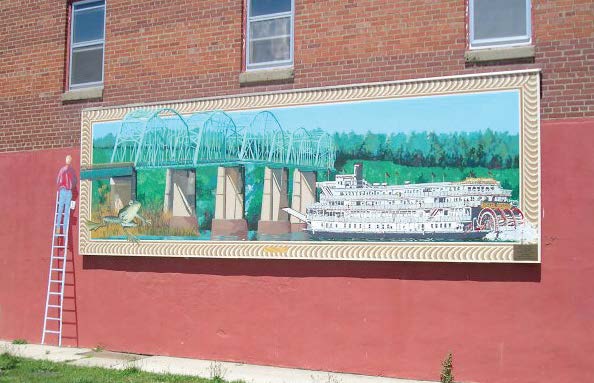 Downtown Louisiana, Mo., boasts more than 20 murals depicting the town’s history, river heritage and local sights. This one was created by hometown artist John Stoeckley, one of the founders of the 50 Miles of Art festival. (Photo provided)