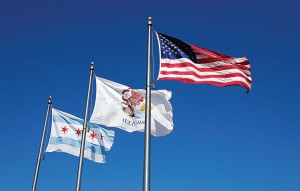 The Chicago flag has long been hailed as an ideal design. The stripes represent the sides of the city and its demarking bodies of water. The stars represent a founding event, the Chicago Fire, the World’s Columbian Exposition and the Century of Progress Exposition. The image is flown all over the city today. (Shutterstock photo)

Flying the flag is a priority for the nation and U.S. states, but at the municipal level the practice is more hit and miss. Dennis Criscuolo, owner and manager of The Flag Center, said he’s seen a slight decrease in interest on the part of cities in flying a flag. One of the reasons might be smaller cities trying to control costs. One theme he has seen in new flags created by cities that do maintain the practice, however, is the presence of a circle, representing the city seal.

In place of flags, Criscuolo has witnessed an increased interest in vinyl street banners being used to publicize local events and highlight aspects of community life. Avenue banners, or vertical signage, are popular, too. These are hung on lampposts and can highlight different events, points of interest or sources of pride. Similar imagery may appear on avenue banners as on a locality’s flag.

But Jeffrey Shaaber, vice president of commercial sales at Valley Forge Flag Co. in Wyomissing, Pa., said not all the news has been bad for manufacturers of municipal flags.

“For about the last 10 years, we have been able to produce small numbers of flags very easily given the digital technology. This differs from the old-fashioned screen printing, where you needed to do a much larger run at one time.” Given the new technology manufacturers are getting more orders for traditional flags, albeit state and national. These are made of 200-denier nylon, the most commonly used flag material in the country.

The advent of this fabric and the design technology has made it much more affordable to place an order for one to six flags, so he has found that some small cities are doing it. Budgets are always an issue, but digital printing has made the effort much more affordable. The artwork required is electronic also.

Some city flags carry aspects of the state flag. As locales have anniversaries, flying the flag becomes integral. 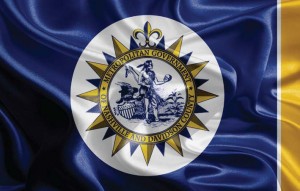 The flag of Nashville, Tenn., displays exclusively the seal of the Metropolitan Government of Nashville and Davidson County. The seal’s images include Cherokee leader Chief Oconostota; tobacco, symbolizing a gift from Native American Indians; and an eagle above a United States’ government shield, representing superiority, judgment and strength in the face of danger. (Image provided)

Nashville had two flags in fairly short order. The first one was designed during a contest among local high school students. In the end, 122 students submitted designs in which the rules said, according to a newspaper article, “both color and design of the flag should bear a relationship to Nashville’s origin, tradition and history.”

The flag is the seal with a gold circle containing the words “Metropolitan Government of Nashville and Davidson County,” plus blue and gold triangles pointing out on a blue background, with a vertical gold stripe to the far right. The blue and gold seal combined elements of the old seal with new elements symbolizing the consolidation of the Metro Government. The fleur-de-lis at the top is a stylized treatment of an iris. The compass points signify the unlimited horizons of the opportunities ahead for the people of Metropolitan Government of Nashville and Davidson County.

In 1949 Mayor Thomas Cummings had made an effort to find the significance and origins of the design’s Indian symbols. These were the results of his search:

“The Native American Indian was identified as the famous Cherokee leader Chief Oconostota, Great Warrior of Chota. Chief Oconostota holds a skull and implements of war that he and General James Robertson buried between them in a ceremony of peace. Tobacco symbolizes a gift from Native American Indians and the source of wealth and cultivation of our land. The eagle is the only bird that neither flees nor fights a storm but flies above it. The eagle above a United States’ government shield represents superiority, judgment and strength in the face of danger.”

The middle white stripe contains four six-pointed stars. An article on the stars stated that six-pointed stars are used because five-pointed stars represent sovereign states, and because the star as designed was not found on any other known flags as of 1917 when it was first designed.

www.badablingchicago.com – explains the symbolism of the four red six-pointed stars on the center white stripe:

• The first star represents Fort Dearborn. It was added to the flag in 1939. Its six points symbolize transportation, labor, commerce, finance, populousness and salubrity.

• The second star stands for the Great Chicago Fire of 1871 and is original to the 1917 design of the flag. Its six points represent the virtues of religion, education, aesthetics, justice, beneficence and civic pride.

• The third star symbolizes the World’s Columbian Exposition of 1893 and is original to the 1917 design. Its six points stand for political entities Chicago has belonged to and the flags that have fl own over the area: France, 1693; Great Britain, 1763; Virginia, 1778; the Northwest Territory, 1798; Indiana Territory, 1802; and Illinois, 1818.

• The fourth star represents the Century of Progress Exposition (1933–1934) and was added in 1933. Its points refer to bragging rights: the World’s Third Largest City; Chicago’s Latin motto, “Urbs in horto” — “City in a Garden”; Chicago’s “I Will” motto; Great Central Marketplace; Wonder City; Convention City.

A fifth star has been proposed several times: first in the 1940s, when a letter to the Chicago Tribune asked that a fifth star be added to the city flag in honor of its role in getting to the nuclear age. A second time was to honor Harold Washington, the first African-American mayor of Chicago. A third time a star was considered came after the Chicago Flood of 1992. Most recently the city bid on the 2016 Olympic Games, and some suggested that it would be a reason for a fifth star, but the Olympic bid was lost to Rio de Janeiro. 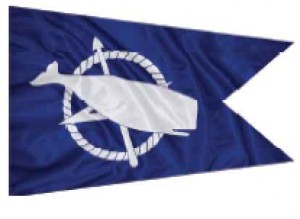 Playing to both its commercial and literary histories, Nantucket, Mass., flies a flag honoring the whaling industry and the most famous whale of all time, the legendary Moby Dick. (Shutterstock photo)