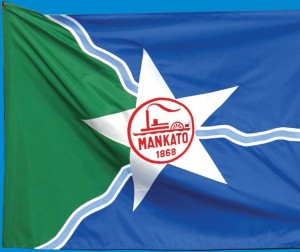 As municipal flags go, Mankato’s is just a youngster: It was chosen in 1991 from among dozens of entries in a contest held in the heart of Blue Earth country just for that purpose.

The flag’s design includes a white star, indicating that Mankato is a Minnesota Star City — one that has successfully reversed a previously distressed economy. The star is imposed at the convergence of two rivers and over the colors of green and blue, representing the central role that agriculture and local water resources have played then and now in the city’s economy. More soybeans are grown in the Mankato area than in any other area in North America.

The city carried this affection for its natural resources to its logo, which is also drawn in environmental colors.

The image of the steamboat is a nod to the vessel’s central role in travel in that region during the settlement’s early years. One in particular, the Henrietta, had special significance because it was the last excursion paddlewheeler to frequent the river town.

Originally the flag didn’t include the city’s name. It was added a short while later and now sits above the city’s charter year.

Mankato’s flag flies proudly over city offices, council chambers, the public safety office and private residences. The city encourages identification with it by providing a link to the design and an explanation of its symbolism on its website homepage, www.mankatomn.gov.

Information provided by the city of Mankato.