Lorain, Ohio, a city of approximately 63,710, is stepping up to meet EPA standards with its new waste water tunnel project, called the Black River Tunnel. The project will run along the west side of the Black River. Work offi cially began in September 2012. Once the tunnel is complete it will help improve the well-being of not just the Black River but also Lake Erie, into which the river flows. 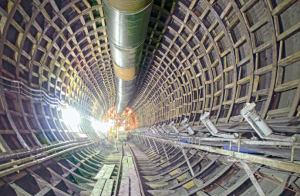 The Black River Tunnel ranges in depth from 115 feet to 185 feet. (Photo provided)

“ARCADIS serves as the engineering consultancy firm on the $62 million Black River Tunnel project for the city of Lorain,” said Scot Pearson, senior resident engineer for ARCADIS, a global natural and built asset design and consultancy firm. “Lorain had been plagued by sanitary sewer overflows into the downtown and ultimately into the Black River during storm and wet weather events for more than 30 years. The Black River Tunnel project was initiated to address this issue and includes various engineered elements to divert, store, pump and treat sewage to eliminate overflows and stop the contamination of the Black River.” 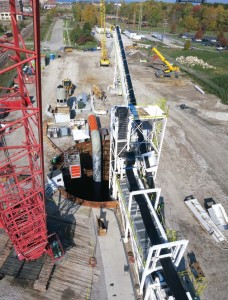 The Black River Tunnel project of Lorain, Ohio, consists of a 23-foot-diameter tunnel bore with a finished inside diameter of 19 feet. The bore is 5,560 feet long and ranges in depth from 115 feet to 185 feet. (Photo provided)

In addition to ARCADIS, NTH Consultants helped in the design of the Black River Tunnel project, while Walsh Construction and Super Excavators have been serving as joint contractors.

With a project requiring such extensive funding, Lorain had its work cut out for it. To get ready, Lorain Mayor Chase Ritenauer said, “From a financial standpoint, the city implemented sewer rate increases in 2009 through past 2020 in order to pay for the project. The funding for the project is through the Ohio Waste Development Authority.”

Despite rate increases, he noted the public has been supportive of the project. In fact, it has had positive economic impacts within the community that include the creation of both long-term and temporary local construction jobs.

Walsh Construction noted the project required the workforce to be 75 percent local residents.

“With only one tunnel in Lorain, tunneling safety knowledge among local workers was limited, so best practices have been taught to emphasize that a lack of safety can put everyone in danger,” its website said. Representative Walsh also noted it had to train tunnel rescue crews, which consisted of its own employees since local fire and police had not been trained in tunnel rescue.

The construction effort itself proves to be rather impressive.

“Specific components are a 23-foot-diameter tunnel bore with a finished inside diameter of 19 feet,” said Pearson. “The bore is 5,560 feet long and ranges in depth from 115 feet to 185 feet.” It’s designed to store approximately 11 million gallons of wet weather overflow as part of the city’s EPA-approved wet weather plan. 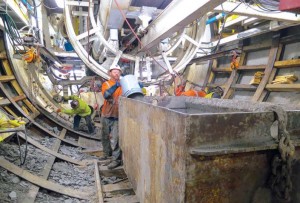 Matt Carpenter, ARCADIS market manager in Ohio, described the project as being very typical when compared to other tunnel projects; however, he noted it does have some unique features, including a rain tunnel and vortex drop shaft. Of the vortex drop shaft, he said it will minimize odor and dissipate the energy from overflows, ensuring the project structure lasts longer. There is also a self-cleaning wet well that will help remove debris that might have lingered. Between it, the screening facility and the pump station, which dewaters the tunnel after wet weather events, debris will be screened out and water will then be taken to the waste water treatment facility.

“Other than that, it’s pretty basic,” Carpenter said.

“The project has gone excellently,” he added. “We’ve had very good ground conditions, and there have been very few issues boring the tunnel.” Weather has been a bit of a challenge, particularly last winter with the concrete not wanting to harden; but he noted that’s expected with a multi-year construction project.

Carpenter explained the tunnel has been completely bored and work is beginning on its concrete liner, “the internal finished product in the project.” Work is also ongoing when it comes to the project’s external components: namely, the screening facility and pump station.

In the months leading up to the project’s intended conclusion in October 2016, there will be a lot more vertical construction going on. “We will also be restoring the area around the tunnel shaft and pump and screening stations as well.”

Since the project has largely occurred underground, there has been no significant impact to daily life in Lorain, according to Carpenter. When special events have occurred steps were taken to make sure construction was contain and didn’t affect the plans.

From the city’s perspective, Ritenauer said, the largest challenge was the location of the screening facility, which originally was proposed on a piece of property vital to the city’s future economic development.

“In working with the contractor, engineer, state senator and EPA, we were able to relocate the building in a way that, while a significant cost increase, protected the city’s future economic development and meant that we would not have to adjust rates upward.”

To prevent that potential additional increase in rates Lorain used a mixture of contingency funds and delayed payment a year, which during 20 years will allow it to save for the last payment order and make it possible to get this change made.

While work on the tunnel has yet to conclude, Ritenauer stated, “… When it is (operational), it will improve the quality of effluent into Lake Erie. Until then, the impact has been local jobs.”