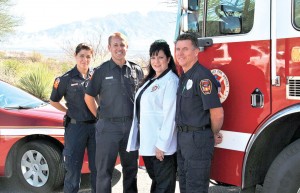 Green Valley, Ariz., provides the services of an on-call nurse practitioner for patients who do not require emergency medical intervention: saving EMS, the health care system and patients thousands of dollars. (Photo provided)

American health care is continually seeing changes in legislation, technology and practice, both nationally and locally. Health care providers are ever searching for innovations that deliver services more efficiently and cost effectively. One example of that innovation can be found in two Arizona communities that are experimenting with how emergency services can create more value for patients and greater savings for their local health care systems through in-home medical care.

Green Valley is a retirement community in southern Arizona with a median age of 71. With an older population comes mobility issues that often make it difficult for residents to see their primary physician or to make it to an urgent care facility on their own. Their only option may be to call 911 when they need treatment for even minor issues.

Battalion Chief Dan Modrzejewski noticed this problem and began tracking the data for every call the fire department received. He found that 25 percent of patients had medical complaints that could have been treated in-home by a nurse practitioner. In January of this year, the department began providing this service full time.

Mesa, part of the Phoenix metropolitan area, began experimenting in earnest with a similar program in 2011. Emergency department overcrowding, the economic downturn and the passage of the Affordable Care Act all contributed to Mesa’s desire to modify the way it delivered health care to the community.

“Being a municipal fire and medical department where 80 percent of our 911 services are medical, we were a perfect fit, in a grassroots sense, to address what the spirit of the ACA is supposed to do,” said Tony Lo Giudice, author and administrator of Mesa’s project grant. “At the time, we viewed the ACA tenets of efficiency, improving patient health and lower costs to be in line with our Community Care model and the basic fibers of good municipal governance.”

Both departments have similar protocols for dispatching nurse practitioners. In Green Valley, the fire department is sent to every 911 call. When emergency personnel arrive on scene, they assess the patient’s condition. If the patients require emergency care, they head straight for the hospital. If they do not, the fire engine has an internal line to the department’s nurse practitioner, Cynthia Smith, who can arrive on the scene within eight minutes. A formal transfer of care takes place, and Smith determines if the patient should be sent to the hospital for nonemergency treatment or if the remedy falls within her purview. This way the cost of treating typical problems, such as dehydration, respiratory infections and minor lacerations, runs between $300 and $400, instead of $2,000 for the same service plus a 30-minute ambulance ride to the hospital in Tucson. 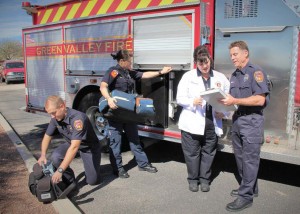 The independent program run by Green Valley EMS has had funding challenges, including becoming an in-network provider. The department is slowly making its way through a maze of requirements to ask insurance companies to pay for services. (Photo provided)

“We identified through data that behavioral health patients were not getting the definitive care they needed in the 911 system, and the mid-level providers did not have the additional behavioral component to their licensure,” said Lo Giudice. “More than 10 percent of the calls that come through the fire 911 system are behavior related. We believed we could improve efficiency and help these types of patients.”

According to Modrzejewski, the first hurdle for Green Valley’s program was finding out if the state board of nursing would consider a nurse practitioner to be an independently licensed health care provider.

“A nurse practitioner can practice at the level of a doctor in Arizona and can function without medical oversights. Some states don’t allow that — you must involve a doctor somehow. There is about a 50-50 split right now as far as the states that allow it and those that don’t.”

That distinction can make quite a difference in malpractice insurance alone. According to Modrzejewski, this typically runs $100,000 for a doctor: It costs just $2,600 through the same insurance for a nurse practitioner.

Although the medical services that Green Valley and Mesa provide are similar, their organization and funding are quite different.

“There are other entities — fire departments, hospitals, clinics, home care agencies — that are doing house calls,” said Modrzejewski. “But we believe we are the first fire department to be independently licensed to operate a mobile urgent medical care unit. We are not partnered with any hospital or run by grant money. The nurse practitioner works for us, and we are licensed to work on our own. Any program that currently does this collaborates with a hospital, and the hospital gains the savings: The fire department doesn’t recoup its costs for the program.”

Mesa’s Community Care service is being funded over a three-year period by a $12.5 million grant from the Centers for Medicare and Medicaid Services. While that has helped the project get off the ground, it creates challenges in going forward, namely due to the stipulation that they cannot bill insurance companies for their services for the duration of their grant.

“We believe this type of service has not been widely attempted yet because the mechanisms to fund it for suitability are not firmly in place,” said Lo Giudice. “One of our goals in the next two years is to work with the Centers for Medicare and Medicaid, insurance companies and other health care entities to develop sustainability mechanisms. Our hope is that by the end of the grant we will have successfully tested, developed and put into action a sustainable funding structure that will offset costs and allow for a continuance of Community Care services.”

Green Valley’s independent program has had funding challenges of its own. Part of that challenge involves becoming an innetwork provider.

“The end goal is to make sure that the program funds itself. For us, we will probably break even. Over the next few years, as we get more insurance companies involved, we expect to be able to reinvest more in the program. If we don’t increase the number of insurance companies, it will become a line item in the budget that can be cut. The more people who know about it, the easier it will be to bring insurance companies around. At this point we need to keep moving forward, looking for little victories to help improve the program.” 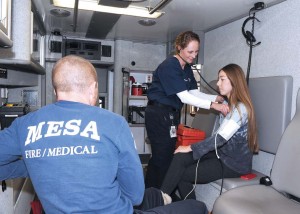 Mesa EMS began experimenting in earnest with a nurse practitioner program in 2011. Emergency department overcrowding, the economic downturn and the passage of the Affordable Care Act all contributed to its desire to modify the way it delivered health care to the community. (Photo provided)

Even though both departments are still striving for financial success, they feel that these programs have helped them deliver better health care to their communities. According to their satisfaction surveys, residents agree. But as Mesa Assistant Chief Mary Cameli cautions, it doesn’t mean this is for everyone.

“One of the greatest benefits of the program is handling calls with the most appropriate care possible. The success of the program is the number of calls we are dispatched to that we have the ability to treat in place and allow the patient to stay home and minimize the overall cost to the health care system. If a community doesn’t have a high volume of low acuity calls, this program may not be as effective. Each community has specific needs, and it is important to identify them in order to put the most effective program in place.”