In a world of ever-changing technology, it’s important for law enforcement to stay one step ahead of criminals. As two recent high-profile cases illustrated, New World Systems’ AEGIS Public Safety software does just that. 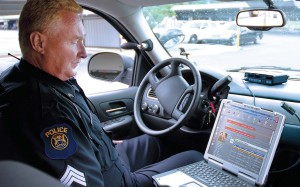 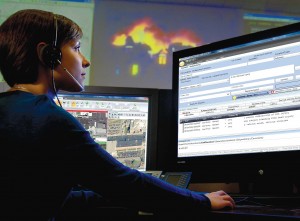 New World’s CAD software sent “Be on the Lookout” alerts to 54 agencies in North Dakota and Minnesota, aiding in the arrest of a bank robber. (Photo provided)

Information at your fingertips

When the Cornerstone Bank in Fargo, N.D., was robbed, the Red River Regional Dispatch Center and its 54 consolidated public safety agencies leveraged New World’s integrated public safety software to communicate quickly and effectively to capture the suspect as he fled across state lines.

As soon as the incident was reported, one of the dispatchers saw that the description of the suspect’s vehicle matched the description of a vehicle that been reported stolen and entered into the system a few days prior. Within minutes, dispatchers sent a “Be on the Lookout” alert via New World’s Computer Aided Dispatch software. Hundreds of mobile units across 54 agencies in North Dakota and Minnesota received it, according to RRRDC Director Mary Phillippi.

Shortly after the BOLO was sent to officers in the field, the suspect’s vehicle was identified across the river in Minnesota. After a brief high-speed chase, the Clay County Sheriff and his deputies were able to apprehend the suspect even after he tried to evade arrest on foot. All of the stolen money was recovered and the suspect was later sentenced to 105 months in prison.

Phillippi cites data sharing as a key reason why law enforcement was able to apprehend the suspect so quickly.

“Officer safety and public safety are improved when agencies can share information this quickly,” she said. “Years ago, when it was common for agencies to be on different systems, you’d have to make separate calls to alert each agency to what was going on. Today, with New World’s software, everyone is aware of what is going on as well as the critical pieces of information involved.”

When every second counts

One of the worst scenarios to occur in any detention facility involves the escape of an inmate. What’s even worse is when the escapee is a convicted murderer. On April 1 an inmate escaped from the Jerome Combs Detention Facility in Kankakee, Ill. Kamron Taylor was convicted of killing a man during a robbery and was awaiting sentencing in Kankakee. He was able to escape by hiding in a shower stall, ambushing a correctional officer, stealing the officer’s clothing and keys and leaving in the officer’s personal vehicle.

When it was discovered that Taylor had escaped, the functionality and timeliness of the AEGIS Public Safety Software from New World Systems used by the Kankakee County Sheriff’s Office was put to the test.

Immediately, law enforcement personnel used AEGIS Records to find answers to important questions regarding Taylor’s known associates, prior jail visitors, criminal history, use of weapons and prior addresses. With this information the officers involved in the manhunt were able to use accurate data to determine where Taylor was likely to run to, who may have been or currently was helping him, and most importantly, what residents were possibly in danger.

According to Undersheriff Michael Downey, those questions and answers were shared with assisting agencies, including the Fugitive Apprehension Task Force, Analytics and Intelligence Groups and the Department of Corrections, all of which aided in the investigation.

Within 70 hours, Taylor was spotted in Chicago and apprehended after a short foot chase. New World’s public safety software was then put to the test again as officers with the Chicago Police Department were not able to identify Taylor due to his use of an alias. Officials from the Kankakee County Sheriff’s Office were able to provide detailed pictures of tattoos that had been previously associated with Taylor in New World’s Records Management and Corrections systems. This critical piece of information confirmed Taylor’s identity and put him safely back behind bars.

“The information in our records management system was available at a moment’s notice and proved immeasurable at one of our greatest times of need,” Kankakee County Sheriff Tim Bukowski said. “The timeline and resolution of this case would have undoubtedly taken much longer without the intelligence we were able to retrieve from New World.”

With AEGIS Decision Support from New World Systems, law enforcement has the power to use local intelligence for predictive policing. (Photo provided)