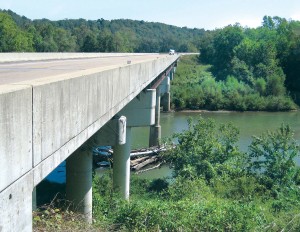 Smart rocks being developed at the Missouri University of Science and Technology are designed to constantly monitor for scour. They’re even designed to automatically roll to the bottom of a scour hole, should one develop, and to relay that data to engineers. This bridge over the Gasconade River is one location where they’re being tested. (Photo provided)

We’ve all heard about the proverbial bridge over troubled water, but what happens when water creates a troubled bridge?

The short answer is: nothing very good. When a bridge’s foundation is buried deep below the water’s surface, it is susceptible to scour — an erosion process caused by extensive water flow that is the leading cause of bridge compromise and collapse in the U.S. Although scour can be relatively easy to monitor in shallow areas using a probe, in deeper waters it takes a dive team to evaluate the situation. However, a team of researchers at Missouri University of Science and Technology has been working to develop a device that will make this process easier and enable engineers to check the stability of a bridge accurately, easily, inexpensively and in real time. It’s called a “smart” rock.

What is a smart rock? 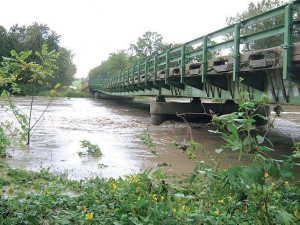 This photo illustrates the washed-away center pier of a continuous steel-girder bridge over the Thompson River in North Missouri, due to heavy rainfall on Sept. 22, 2010. (Photo provided)

Smart rocks are natural rocks or concrete encasements embedded with tools that can send data to the surface without the need for a dive team. They can be active, passive or a hybrid version of the two.

A passive smart rock is equipped with magnets that can be read with a remote magnetometer, while the active version is outfitted with electronic gadgetry, such as a pressure sensor, gyroscope, timer, battery indicator and individual identification, to transfer information to the surface via wireless communication. The hybrid, semiactive smart rock includes a free-to-remote magnet that can be controlled with electronic circuitry.

According to Dr. Genda Chen, principle investigator and professor of civil, architectural and environmental engineering at Missouri S&T, the smart rock is a very simple concept, but one that shows tremendous promise.

“There are two ways in which they are considered ‘smart,’” Chen said. “One is the fact that the rocks are designed to automatically roll to the bottom of the scour hole, and the other is in the critical information they can provide to engineers when they need it.”

This is especially helpful during a flooding event, when scour can develop in a short period of time. Smart rocks allow engineers to take a reading whenever they feel there has been a change, as opposed to being limited to a reading every six months to a year, and obtain a full picture of whatever damage might have occurred.

Chen said now is not the first time scientists have looked into this type of technology. Some similar developments have proven to be effective in calm waters, but do not hold up in strong flooding events. What makes smart rocks unique is the fact that they can stay on the riverbed and survive easily, regardless of the weather.

“Even if it happens to wash away with a particularly strong current, we can recover them downstream, which cuts down on the cost of replacement,” she said. 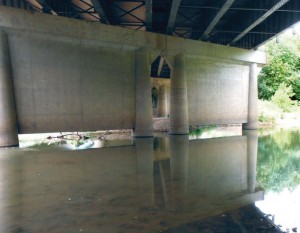 During the testing phase of the technology, smart rocks were deployed at the Gasconade River Hwy. 63 and at Rubidoux Creek I44. Both locations are in Missouri. (Photo provided)

In 2012 the researchers began testing smart rocks on real bridges, in conjunction with the Missouri Department of Transportation. Rocks were deployed at the US 63 Gasconade Rover Bridge, as well as the I-44 Roubidoux Creek Bridge, to see if they could be recovered. Phase II of the proof of concept testing will have additional rocks placed at bridges in California in hopes that they can accurately measure scour and are a feasible, cost-effective way to monitor the structural effects of a flood event.

“Right now, the smart rocks are still experimental and not yet ready for commercial use,” said Dale Henderson, structural hydraulics engineer for the bridge office of MoDOT. “So far, they have been testing the technology to make sure they could detect the rocks under water a year after they deployed them. They have to do that before they can determine whether or not they can measure scour, and, of course, that depends on how much rain we get. There is still a way to go before they will be ready for the market.”

However, even with no timetable, Chen said she feels smart rocks will be an affordable option for communities of all sizes. Passive smart rocks will cost approximately $500–$600 per unit, while the active version will be about $1,000. Depending on the bridge, a municipality may require between two and five rocks each.

Henderson agreed that this technology is one that shows great promise. He’s interested in seeing what the team learns as it puts the rocks to the test.

“We are interested in anything that will help tell us if a structure has been compromised,” he said. “However, like anything else that is new, it’s important that it is tested thoroughly so that all of the bugs get worked out.”