With each passing model year, cars and trucks inevitably become faster, more efficient and more technologically advanced. To accommodate these modern marvels, the natural inclination is to increase the size and quality of the roadways on which they must travel, right? Well, sort of.

While the quality of new and refurbished road construction is always improving, the size of roadways isn’t always growing larger. In fact, in many instances the highways are getting smaller, going on what is known as a “road diet.” The more technical term for this engineering phenomenon is road rechannelization, or simply lane reduction. The idea is to reduce the number of travel lanes in an effort to make the roadway safer or, in some cases, provide space for other modes of transportation.

A typical road diet converts an undivided four lane road into three lanes — one in each direction, plus a turning lane. The former fourth lane is often changed into a bicycle path, sidewalk or on-street parking. In some cases the drivable lanes are centered, with narrowed paths added on both sides of the road. Essentially, the footprint of the road remains same but the purpose of each individual lane is reallocated.

The term “road diet” was first introduced in a 1996 article written by Peter Lagerwey and Dan Burden. In the article the pair argued that such a reduction also would have a positive effect on communities, as it would focus on the people who live in the particular areas rather than those people who were just driving through at a high rate of speed.

“If you design a street so that cars travel at safe speeds, it’s amazing what it can do for a neighborhood,” said Elizabeth Stampe, executive director of a California-based pedestrian advocacy group. “When there is an investment to make an area better for walking, it’s better for everyone.” 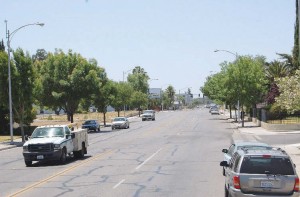 A “before” image of Divisadero Street in Fresno, Calif. (Photo provided)

Other road diets have added landscaping strips between the opposite directions of traffic; reserved tracks for tram transport in the center of the roadway; increased the width of the individual lanes of traffic; or added reversible center lane that changes purpose depending on the flow of traffic during particular times of the day.

In a 2004 study by the Federal Highway Administration, most road diets were shown to have minimal adverse effects on traffic flow since left-turning vehicles are moved into the bi-directional center turn lane. However, the study also showed that roads with an average daily traffic above 20,000 vehicles would increase traffic congestion and require the diversion of traffic to alternate routes.

According to the study, road diets offer benefits to both vehicles and pedestrians. Lane reduction theoretically reduces vehicle speeds and vehicle interactions during lane changes, potentially reducing the number and severity of crashes. Of benefit to pedestrians and nonmotor traffic is that there are fewer lanes of traffic to cross and slower moving vehicles with which to compete. Not surprisingly, a 2005 Federal Highway Administration report, titled “Safety Effects of Marked vs. Unmarked Crosswalks at Uncontrolled Locations,” showed that the risk of pedestrian vs. vehicle crashes were reduced when pedestrians crossed two and three lane roads rather than four or more lanes. 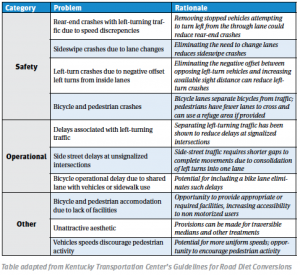 The 2004 road diet study examined four categories: crash frequency, crash rates, crash severity and crash type. It concluded that a significantly lower number of crashes occurred at road diet sites after the conversion was completed than before. However, the study also uncovered that there was no signifcant difference between crash severity in the two comparisons.

Opponents of the decreased efficiency argue that road diets affect the reliability of public transit service, since buses are forced to halt or delay traffic at points of embarkation and debarkation. Even in situations that allow buses to utilize a pullout, traffic can be delayed by their frequent re-entry into traffic lanes. They also argue that the road contraction is to the detriment of public safety as ambulances and police and fire vehicles are slowed in their attempts to render assistance. Additionally, in the case of an evacuation, egress routes will be significantly slower.

The state of California has experienced the most road diets in the recent past. Fresno, in partnership with the city of Clovis and Fresno County, has undergone a number of lane reductions. The changes are part of the city’s 2025 City of Fresno General Plan policies, goals and objectives as they were adopted by the city council in 2002. They also comply with the Complete Streets Act signed into law by then-Governor Arnold Schwarzenegger in 2010. Many other cities and towns are now incorporating road diets into their long-term general plans and are implementing the changes systematically as funding is available. Author Burden noted one city that is “way out in front” of other cities is San Francisco, which has realized more than 40 reduction projects since the late 1970s and has become a national model for road diets.

Further studies are ongoing as to the effect, both positive and negative, that road diets have on vehicle traffic, pedestrians, cyclists, other forms of transportation and communities as a whole. Arguments can and are being made on both sides of the issue to affirm a particular point of view. One certainty, however, is that the idea has become a popular one among city planners.

To be certain, the end effect is different in each particular application and circumstance. Due diligence and research is necessary to forecast and predict the end results in each situation.