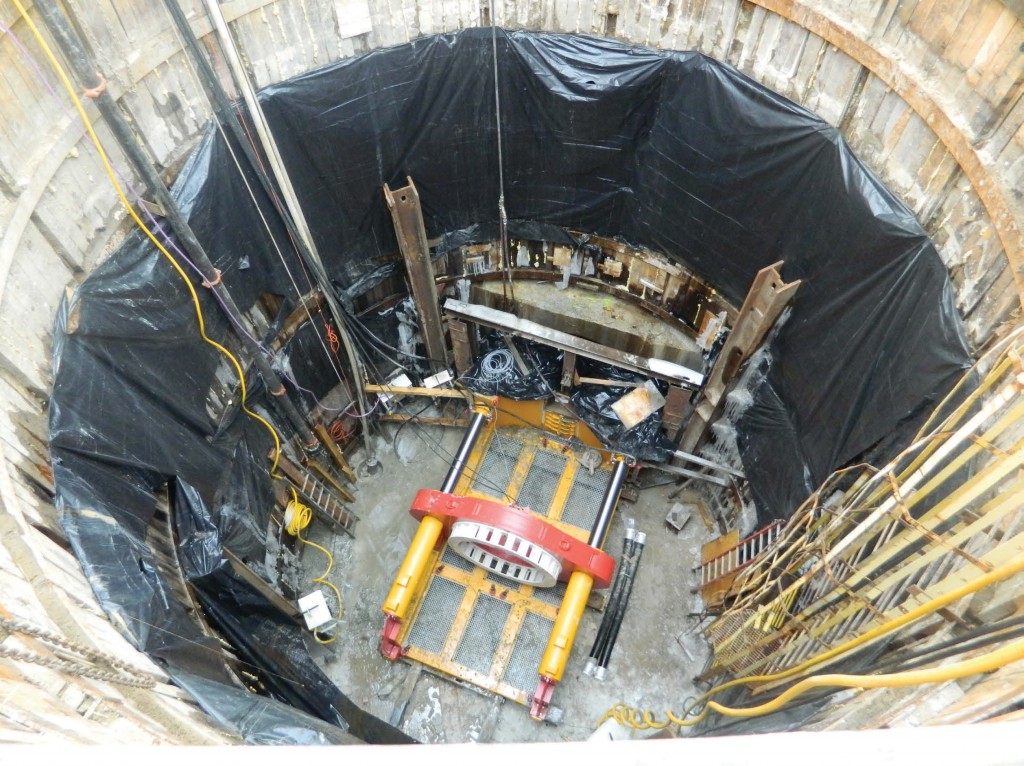 Construction crews place the tunnel boring machine in a pit adjacent to Lake Huron. The TBM is used to drill underwater into the lake, as part of the intake construction. (Photo Provided)

Faced with three options as water rates with the Detroit Water and Sewerage Department entered the double digits — one, continue with Detroit; two, use the Flint River as a drinking water source; or three, join the Karegnondi Water Authority and create a new water intake pipeline — Flint, Mich., went with the latter option. Joining with the city of Lapeer and Sanilac, Lapeer and Genesee counties, the KWA became incorporated in 2010.

“The city spent a couple years thinking on the three alternative options,” Flint Mayor Dayne Walling, also the current KWA chairperson, said. “In the long term, we saw a greater savings with the regional authority.”

Based on distance and elevation, the Detroit system had Flint and Genesee County at a disadvantage since they were at the end of the line. “Our rate was significantly higher than anyone else on the system,” said Walling. The city was also on the wrong end
of increases of up 15 percent annually. 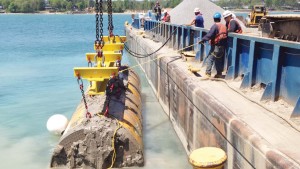 The tunnel boring machine, or TBM, is lifted out of Lake Huron after 1.5 miles of dredging is completed. (Photo provided)

Compounding the issue was the fact since the city lies outside the Detroit metro area, Flint had no real representation on the Detroit board. Flint representatives were allowed and were able to participate to some extent; however, they had no real vote.

Still, Walling noted if the rate structure had been flat, the city probably would have remained with Detroit’s water system. “But with rate increases annually, it became unaffordable.”

The new water intake pipeline will save local residents millions of dollars in water costs over time. So, unsurprisingly, the project has been fairly well received. Legislative bodies in all five communities supported the creation of the new pipeline authority, and Walling noted the decision gained a lot of attention in Flint. City officials spent several months going over the project with the public. Stakeholders continued to be kept in the loop via KWA’s up-to-date website and the board’s regular meetings, which rotate between the five member communities. The media has also played an active role in keeping the flow of information going.

A barge aids the construction of the pipeline’s intake. (Photo provided)

Each government body unit worked in cooperation to create the authority, solidifying the estimated cost of the project, approximately $274 million, in addition to the rates. As for funding, bonds financed on the strength of water service fees were used. “There were modest up-front costs before the bonds were issued,” Walling said.

To date, of the five entities, only Flint and Genesee County have signed up as customers of the authority. Walling explained Sanilac County heavily uses wells, and Lapeer is choosing to stay with Detroit and its own system. However, they will have the opportunity to tie in to the authority, if they so choose, at any time — and it might become a necessity for Sanilac County, especially if the EPA continues to lower the allowable levels for arsenic in well water. Should a community want to hook up to the pipeline later on, Walling said a different cost structure will be in place “since (current customers) have been paying all along.”

The groundbreaking for the pipeline occurred in June 2013, with work beginning shortly afterward. The intake site is located in Worth Township and is being finished using a barge on Lake Huron. The rest will be 5- to 5.5-foot diameter pipeline laid across the three counties: a total of approximately 67 miles, or an area over 2,400 square miles. In addition to the pipes that will work their way to Flint, and the intake in Worth Township, there will be three pump stations. Once complete, the system will serve more than half a million people. 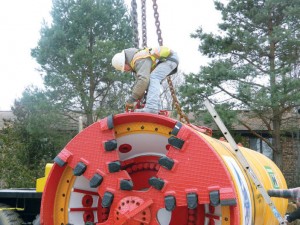 The TBM being lowered into the pit to begin excavation. (Photo provided)

Given the sheer scale of the project one would expect several challenges, particularly in regards to accessing property. However, this particular challenge was addressed early on with the decision to use county road right-of-ways. “It goes right down the middle of rural county roads and avoids infrastructure,” Walling said. Once laid, “The roads are at or in better condition than when we started.”

Rural communities along the pipeline’s path are gaining an added benefit besides improved roads. “Hydrants will be available every mile, I believe. So each community will benefit even in a small way.”

Throughout the process KWA has aimed to remain ecologically sensitive. To do that they have worked closely with the U.S. Environmental Protection Agency and the Michigan Department of Environmental Quality.

“The pipeline will be in place and operational in June 2016,” Walling said, adding so far the project is on schedule, if not ahead of it. “We are on time and on budget. Contracts themselves came in under the engineering estimates. A year ago there was softness in the construction market and that benefited our construction.” 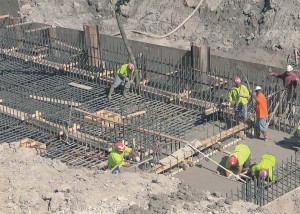 Beyond the new pipeline alleviating high rates, it also offers potential economic development for Flint, Lapeer and the three counties. The water coming from Detroit, which also sources its water from Lake Huron, was treated: But KWA provides raw water. Walling said raw water customers could be connected directly (to it), and it will be cost effective to use raw water when appropriate. As a major infrastructure project, it has already had many positive economic impacts, including putting people to work.

“There for almost a year more than 500 individuals were involved on the project on a rolling basis,” Walling said. These people include surveyors, engineers and others.

Perhaps the biggest impact of the project has been bringing a major pipe manufacturer, American Cast Iron Pipe Co., to Flint. “(ACIPC) was looking for a long-term location in the Midwest,” Walling said, adding the company included the move to Flint in its bid for the intake pipeline project. Needless to say, that bid was accepted.

Awarding the bid to ACIPC had yet another benefit: It rid the city of a brownfield site, formerly a property belonging to General Motors.

Walling said of the location, “It’s next to an expressway and railway — the perfect site for pipes just like it was for autos.”

While the economic benefits are a major plus, the major advantage of the intake pipeline will be the water itself. In the past Flint struggled, particularly with securing quality drinking water from the Flint River — which he describes as more volatile with more organic material than is found in lake water.

“It will give us a reliable and secure source of drinking water,” he said. “Our goal has been dependable drinking water at a price we can afford.” With an estimated savings of more than $100 million during the course of 30 years, the city of Flint seems well on the way to achieving that goal.