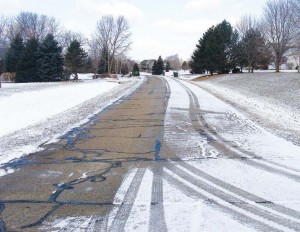 A local subdivision that was anti-iced in one lane prior to a minor winter event, using a blend produced in-house. (Photo provided) 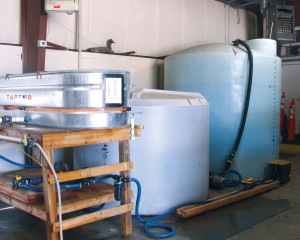 When Matt Wıttum was promoted to public works supervisor for the village of Spring Grove, Ill., the pocket-sized agency on the state’s northern border wasn’t into liquids.

Since 2006 six full-time employees and a job-shared building inspector, plus part-time seasonal workers, plow 156 miles of Spring Grove pavement, most of it on under-30 mph roads. The department is on call 24/7 for snow and ice, to clear six routes that are divided into four priority-levels of streets. Full staff is required from 3 a.m. to 9 p.m. during events, and the crew plows down first. The village winter weather plan does include suspension of operations language.

The plowing and salting was getting the job done and achieving the results Spring Grove’s policy said the public works department had to achieve. Only one truck was liquid-capable, and that liquid was purchased from a nearby township when needed.

Wittum listened in, though, on the chatter about producing and blending liquids. Eventually he was curious enough to inquire about its feasibility for Spring Grove. He was told that because of the size of the community he’d be better off not doing it. But circumstances encouraged a tenacious approach: The Spring Grove city council had recently reacted to skyrocketing salt prices by threatening to limit the amount they’d let the public works department purchase.

“It’s the age-old adage, ‘Do more with less,’ they tell you. Th is actually lets you do that. Costs, especially for salt, just keep going up and up and up. In contrast, this can help you maintain at the current level. In fact, you can actually turn down your application rate.”

Acknowledging that the subject has become tiresome for some supervisors, he recommends taking a low-key and practical approach to the question of adding liquids. First, he said, ask yourself what it can really do for you. Th en ask how it can achieve the results that you’re expected to achieve.

Not wanting to abuse the brine-borrowing relationship with its neighboring township, the village set about establishing its own production process. It turned out that a local farmer had troughs, tanks and pumps that would work. He took bartered asphalt chips in trade, and the system was up and running for under $100. Second and then third tanks were later added on to the trucks for pre-wetting.

The situation was functional, but not ideal. 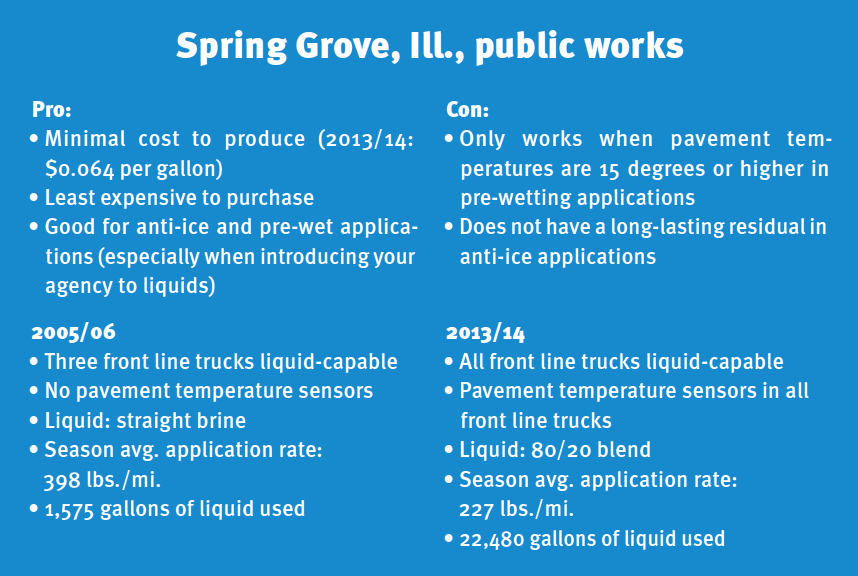 “We had to use all of it, of course, before we could make more. When you have events back-to-back that doesn’t work so well,” Wittum said. In short order the single 1,100-gallon tank that was used for production and then storage, when the product was done, was replaced by a 1,500-gallon tank used strictly for storage. In 2008–09 GeoMelt was added to further reduce salt usage.

Pleased with the results, and deciding that maybe using liquids was an idea for them after all, Wittum went to the Spring Grove public works board with the argument for a liquid-capable truck that could hold a larger quantity. After the information and reports were presented the discussion turned to price. They were shut down.

“We wanted to get into anti-icing and be proactive. But it all came down to pricing.”

The department went to work jury-rigging the existing liquids truck with PVC pipe, laying down some lines to show what it could do and then photographing the results.

“We had the liquid, we had a tank. We bypassed what we had to bypass to do it. It wasn’t super efficient — at 40 gallons per mile and a 70-gallon tank, we could do about a mile before we had to come back and fill up again.”

By making the anti-ice mixture in-house the department saves the city $30,000 a year and provides cleaner roads, faster, to residents.

“Application rates are my recommendation, but the guys have my full support to adjust them according to the conditions in front of them,” he added.

In the 12 years since Wittum joined the village’s public works department, its deicing and anti-icing efforts have garnered several awards: 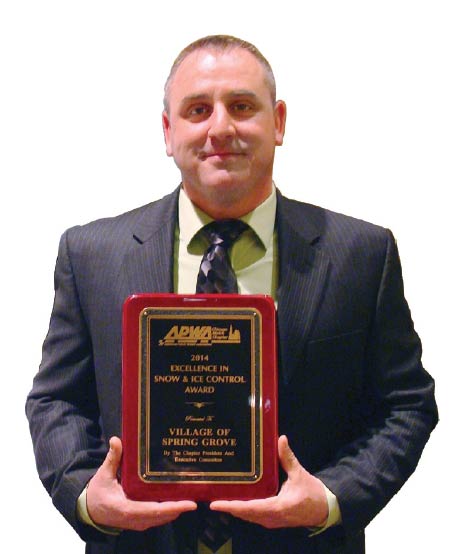 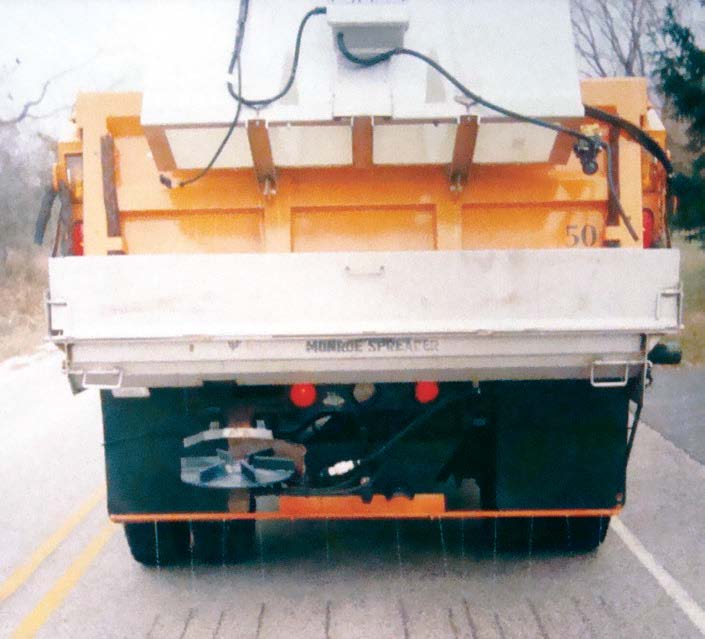 The homemade anti-ice unit was made by converting a pre-wet unit to spray lines on the road. (Photo provided)

For more information contact Wittum at mwittum@springgrovevillage.com or the Village of Spring Grove at (815) 675.2121.