A 120-year-old creature that never existed has literally given Rhinelander, Wis., the business.

The Hodag, a reptilian curiosity with “the head of a frog, the grinning face of a giant elephant, thick short legs set off by huge claws, the back of a dinosaur and a long tail with spears at the end,” was reportedly killed by land surveyor, timber cruiser and prankster Eugene Shepard in 1893. 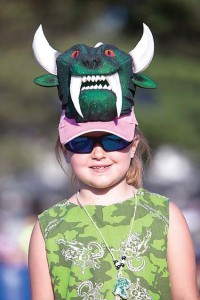 Upon inquiry by the Smithsonian Institute, Shepard admitted the hoax. But the town of 7,600 ran with the resultant publicity and has never looked back.

The municipality is a primary beneficiary of the festival, which culminates each year on the first full weekend after the Fourth of July.

The incoming swarm of visitors to Hodag also offers a boon to the fire department, whose members conduct a “Fill the Boot” campaign at one of the town’s main corridor intersections, reaping the department one of its most profitable fundraisers of the year.

“The benefit is undeniable,” said Dana DeMet, director of Rhinelander’s chamber of commerce. “Tens of thousands of people for multiple-night stays has a huge impact on retailers, lodgers and the town for return visits,” he said.

“We’re always trying to build on that to increase the returns,” added DeMet, who estimated a single visitor’s overnight stay yields about $180 in lodging, food and miscellaneous purchases.

“For Hodag a lot of people camp out, so you can scrub off some of that,” he said. “Even so, we’re talking about millions of dollars. For retailers, that is their weekend and they stock up for it.”

The cost to the municipality is minimal. “We might have some additional costs for road repair, but nothing that outweighs the benefits.”

DeMet, gauging the municipality’s assessment of the event, finds it extremely positive.

“You would be hard-pressed to find someone in the city or in city government to say we would be better off without Hodag.” 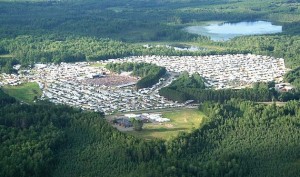 The former county fairgrounds just north of Rhinelander are jammed with more than 50,000 visitors during the nine-day Hodag Country Festival, held each July. Millions of dollars pour into the community and the surrounding area during the event, which centers around a disproved legend. (Photo provided) 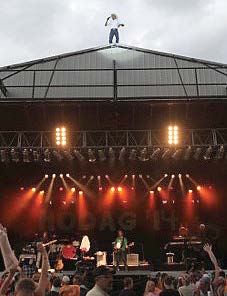 Country singer Neal McCoy thrills the crowd with a rooftop appearance to sing his finale at a recent Hodag Country Festival concert. McCoy has performed for 20 consecutive years at the festival. (Photo provided)