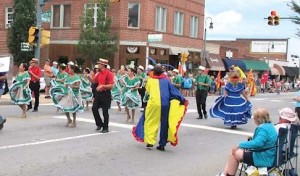 Puerto Rico, whose music and dance is said to be full of “rhythm, spice and color,” was one of eight visiting areas represented at the 2012 Folkmoot USA. Every July for two weeks, the city of Waynesville, N.C., hosts dancers and musicians  from all over the world as part of the Folkmoot USA International Folk Festival, a regional cross-cultural centerpiece. (Photo provided)

But don’t let the quiet veneer fool you. “We throw a street party at the drop of a hat,” said Marcy Onieal, town manager for the past three years.

Every July, for two weeks the town hops, skips, twirls and glitters with the kaleidoscopic regalia of dancers and musicians from all over the world during Folkmoot USA International Folk Festival, Waynesville’s cross-cultural centerpiece since 1984. This year’s festival will occur July 17–26.

Each year hundreds of groups apply to perform, but only about a dozen are chosen from seven or eight nations. Some of the 100 areas represented include Japan, Russia, France, Finland, Puerto Rico, Jordan, Indonesia, Poland, Kenya, Italy, Greece and Korea.

The benefits to the municipality of Waynesville are varied. According to Onieal, “for two weeks each summer we have this collision of cultures,” which has resulted in lifelong international friendships, a mutually educational exchange of cultures and even international marriages. 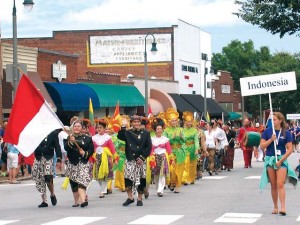 A study tagged the revenue generation from Folkmoot USA, which takes place in several locations in and around Waynesville and Haywood County, N.C., at more than $7 million. Waynesville is the largest city and county seat. (Photo provided) (Richard, I left this one uncropped)

The city works shoulder to shoulder with the festival’s organizers, corporate sponsors and a legion of homegrown volunteers in team-building activities, Onieal said. “Planning starts many months in advance. The community has been amazingly welcoming throughout the years.”

Waynesville provides a yearly cash contribution to the festival’s operating budget and has substantially supported the capital budget for the organizer’s next building phase, which includes a museum, year-round cultural and community center, accommodations for international visitors and facilities to sponsor forums on world issues.

The festival attracts a large number of tourists to Waynesville for the first time, a good number of whom return each year. 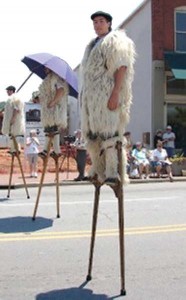 Dancers of the French delegation added a
little something to their routine in the 2012 Folkmoot festival parade. The group, which hails from Provence, is composed of more than 100 members. (Photo provided)

The logistics of holding such an event are daunting: They include housing, feeding and transporting 200 performers, many of whom cannot speak English. But the returns are well worth the effort. A recent economic impact study tagged the festival’s revenue generation at more than $7 million for Haywood County, of which Waynesville is the largest city and county seat — an economic return that can make a municipality dance.