Following a major disaster, volunteers arrive on the scene, ready to lend a hand. For the most part, communities in crisis mode find volunteer help invaluable; however, if not managed properly, even good volunteers can become a liability. 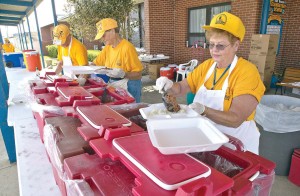 Lake County, Fla., emergency management
officials had planned and practiced for a volunteer reception center, so after a tornado hit volunteer management happened in an organized fashion. (Joseph Sohm / Shutterstock.com)

Kevin Peters with Leon County, Fla., emergency management listed some of the dangers of allowing volunteers to become disorganized.

“Any group, professional or volunteer, who is disorganized is not going to be efficient or effective in accomplishing a task,” he said. “Also, there are a host of safety issues following a disaster. If your group just shows up to a disaster scene and starts working without a situation and safety briefing, you risk someone being hurt or killed.”

In addition, any community that has just faced a major crisis is usually not prepared to receive a large number of volunteers.

“The power will be out, the grocery stores will be closed and there will be few, if any, hotel rooms available,” Peters said. “An influx of volunteers who have not been requested to assist will place an enormous strain on the limited essential resources of the community.”

Because of this, it’s important for officials to be prepared long before a disaster ever strikes.

Ideally, the center would be set up inside a public building like a library or a community center. However, the plan should be flexible enough that, if necessary, the center could operate out of a tent or other portable shelter.

Even the best-run reception center will be of little use if potential volunteers do not know how to find it. This is where communication comes in.

“There is also an outreach portion of the plan that our public information officer will follow to get the word out through traditional and social media,” Peters said. “It says if you want to help, you need to report to the volunteer reception center.”

Including local community organizations in on the plan can also be a big help.

“We also have Community Organizations Active in Disaster that serves the eight-county region that Leon is part of,” Peters said. “Our COAD members are included in the planning for disaster volunteer management as well as the volunteer reception center.”

Because no two disaster situations are ever the same, officials may also need to prepare to turn volunteers away. In such a scenario, Peters recommends open honesty.

“If they do not need volunteer assistance, they need to be very straightforward, with that message as part of their media efforts, both traditional and social,” he said. “With the advent of social media, word spreads fast. Hopefully that can reduce the chance of someone showing up just to be turned away.”

Peters also stressed the necessity of planning now for an emergency situation.

“Find out about the hazards in your community and make a personal emergency management plan,” he said. “Once you are prepared, get involved in your own community. Find a group that focuses on disaster relief work and get trained today. Don’t wait until the next disaster.”

Following the deadly Groundhog Day Tornadoes of 2007, several communities in Lake County, Fla., found themselves needing to pick up the pieces. According to Lake County Emergency Management Director Jerry Smith, the category EF3 tornado first hit communities on the west side of the county, killing eight people, then lifting up and landing again on the east side, killing another 13 people.

“Geographically, it was a small area that was hit, but it devastated those areas,” Smith said.

“We had a lot of affiliated volunteers through the various faith-based and non-faith-based organizations, but we did have a lot of spontaneous volunteers also,” he said.”

Emergency management officials had already planned and practiced for a volunteer reception center, so they were able to work with volunteers in an organized fashion. Officials were able to run background checks and to make sure there were no outstanding warrants. They were also able to learn about people’s skills and abilities and place them in the right locations.

“We feel that it worked out extremely well,” Smith said. “We had groups in from the Baptist Disaster Services, folks from AmeriCorps; we had an AmeriCorps group come in from Alaska.” FEMA and Volunteer Florida were also major sources of help.

Debris cleanup was a major problem. Smith said that the way debris management works with FEMA, local governments can only pick up what they’re legally responsible for. That meant anything on private property was the owner’s problem. During this incident, the volunteers who showed up became a part of an effective and compassionate solution.

“What we worked out was, volunteers went and got a release from the property owners to go onto their property and they brought the debris to the roadway,” Smith said. “Once it’s in the roadway, then the local government is legally responsible for it. The only other way to get that done is, you would have to take code enforcement action, and we didn’t want to take code enforcement action for people who just lost their houses and their loved ones.”

While volunteers may not be the foremost topic on officials’ minds immediately following a disaster, Smith believes that, if coordinated properly, they are crucial.

“I’m a big proponent of using volunteers,” he said. “I know there’s the cynical saying about the disaster within the disaster, but really and truly, we did not have that experience with the volunteers we utilized. We’re very grateful for their assistance.”