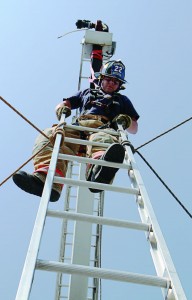 Teenagers in New York can investigate their aptitude and interest in firefighting at Fireman’s Association of the State of New York State youth training programs. Capturing that interest among young people is particularly important, feels FASNY Youth Committee Chairman Jerry Presta, since at that age family and career responsibilities are still undetermined. (Photo provided)

Choosing a career is never easy, and many young people do not get the chance to experience a certain field until college. But in some states youth who are interested in firefighting don’t have to wait until they are older to see what it’s all about: They can learn firsthand, right now. 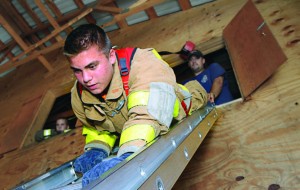 Among the things participants in FASNY’s training program for youth say they learn are how to work as a team, and communication skills. (Photo provided)

Jerry Presta serves as advisor for East Norwich’s junior program, as vice chairman of FASNY’s youth committee and as an National Volunteer Fire Council advisory board member. He explained that no two youth firefighter programs are exactly alike.

Many past members are now professional firefighters. Third-generation firefighter Zachary DiFronzo was a junior firefighter from age 14 to 18 and now works for the Hicksville, N.Y., department.

“The youth program helped me get familiar with the trucks, how to put on my gear properly, my SCBA,” DiFronzo said.

Ryan Hunt, 14, of Farmingdale, N.Y., joined simply because he “thought it would be cool.” What he ended up gaining goes beyond his initial expectations.

“I’ve learned how to work great as a team and great communication skills. I’ve learned to respect people.” He also learned to use equipment he would never have otherwise dreamed of handling.

“Stuff you see as a kid, you’re like, ‘I’ll never be able to use that.’ Now I’m 14 and using a pressure hose,” he said. Hunt hopes to go into firefighting professionally someday.

The programs also emphasize that firefighting is not just for the guys. Presta commented that some of the most enthusiastic youth program members are girls.

“Sometimes the girls are more serious than the guys. There are firefighting camps for girls only.” 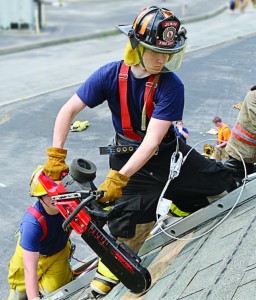 The idea of youth firefighting programs is to put participants through the motions of various practical evolutions, including forcible entry. The kids are not scored on their performance. (Photo provided)

Kelly Hastings, 17, is part of one in Massatequa, N.Y. Hastings’ dad and brother are professional firefighters, and she is now following in their footsteps. Her brother is a former junior firefighter.

East Norwich firefighter Jessica Cody was a junior from age 12 to age 17. She said the youth programs help prepare future firefighters for the professional world.

“It helps teach you what firefighters actually do. It also helps you see if you can handle it. We did training on how to put on a pack and some people didn’t like the way it felt. They only found that out through the junior program.”

Youth firefighters do not actually fight fires. Instead, they focus on training and simulations, with a variety of events to attend, depending on their area. 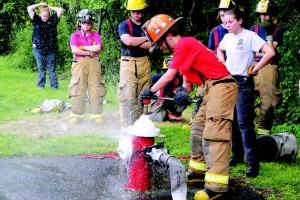 Each August for the past six years, youth program representatives from across the state gather at the FASNY annual convention. The students participate in various evolutions like forcible entry, escaping from a window, hose advancement, ladder use including climbing a ladder with tools, proper use of firefighting equipment and mask use. Depending on nearby features they may also practice drafting, or drawing water from a lake or stream, when no fire hydrants are nearby.

The idea is to go through the motions of these and other evolutions, and the kids are not scored on their performance. However, they are still expected to know what they’re doing.

“They are watched carefully to make sure they do everything the correct way,” Presta said.

That’s not too difficult, however, since those who participate tend to be very serious about firefighting.

“Usually the kids that are really serious are the ones that will come up. You don’t usually find kids that say, ‘I don’t have anything else to do.’ You can tell how intense they are. I would say about 98 percent of them are very serious when they come out.” After evolutions, they gather back at the convention center to shop vendors and listen to that year’s keynote speaker. 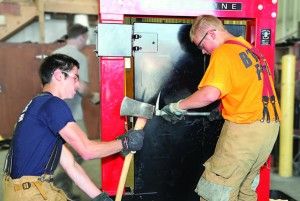 FASNY conducts a special Youth Day event to expose young people to the idea of firefighting as a career. Such outreach is contributing to an increase in numbers in the profession. (Photo provided)

Typically, anywhere from 40 to 60 youth participate in Youth Day. “When it was on Long Island, we had 103,” Presta said. This year’s FASNY Youth Day is set for Friday, Aug. 21, at the Rensselaer Fire Training Center in Wynantskill, N.Y.

Presta believes that youth firefighter programs have contributed greatly to the profession overall.

His program consists of 32 youth who meet twice a month. The program’s captain, a youth firefighter, conducts the proceedings, which usually consist of a quick business meeting followed by training.

“A lot of these kids, if their family is not in the fire service, they would never get introduced to the fire service at all,” he said. “We had one kid join because his friend had joined.”