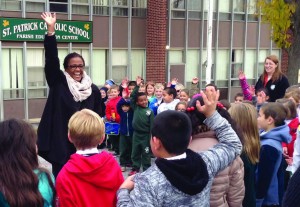 It’s an issue presumed to have been relegated to past generations: the underrepresentation of women in local, state and federal government leadership. But in February, “Meet the Press” moderator Chuck Todd made an observation.

In the company of female officials from Washington, D.C., Todd called to the nation’s attention the fact that 19.4 percent of U.S. Congressmen are actually Congresswomen. Although that’s a record number of women in Congress, he noted, it’s hardly reflective of the fact that 53 percent of all voters are women.

At the local level the figures are more imbalanced. Greater general acceptance of politics as a gender-neutral zone has not translated into more top slots being filled by qualified females leaders, and fewer still by minority females. A recent survey by the U.S. Conference of Mayors confirmed that 17.5 percent of cities with a population of 30,000 or greater are currently led by female mayors. On the professional side, 13 percent of chief administrative officers are female: a number that has remained notably unchanged for more than 30 years.

Research has shown that diversity of gender lends strength to organizations. But when it comes to pursuing public office or positions of municipal administration, women tend to be their own worst enemies. In an article in Public Management magazine, Heidi Voorhees and Rachel Lange-Skaggs cited an abstract by Catherine Eckel and Philip Grossman that pointed out, for example, that unlike men, women tend to believe they have to have all the necessary experience before they run or apply. Even when they may still be qualified and possess skills and strengths that would compensate for a weak area, there’s more of a tendency to hesitate. 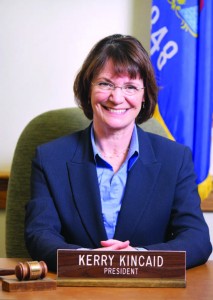 Eau Claire, Wis., City Council President Kerry Kincaid knows it’s inevitable that her actions and decisions would be compared to a male counterpart’s, were one in her position. But that’s asking the wrong question, she said. “The critical question should be ‘Is she a good leader?’” (Photo provided)

Kerry Kincaid, an 11-year member of the Eau Claire, Wis., City Council, is currently its president and the city’s top-ranking elected official. She admits that some typically female traits made her initially question her qualifications for public public office: particularly, insecurity about her skills and second-guessing decisions she had already made. But she found the reality of her election as edifying as it was challenging.

“It’s the most rewarding, powerful experience in my life. Your primary role as an elected official is to make decisions. You gather input, weigh the options and make a decision. Many women do that very well.

“It also hones your rhetorical skills, it gives you a thick skin and it teaches you that there is life after a decision. The local election helps you get over that. It’s freeing and gives you a certain dignity,” she added.

Although not exclusive to either gender, female officials and managers also tend to be able to quickly absorb the entire breadth of complex problems, as well as the unintended consequences of the proposed solution.

“Say, you’re discussing putting in a stop sign. We did this on the council, and the women wanted to know things like who wanted it, the accident rate, were there children walking in the area, the demographics of the area, what the neighbors thought and what might be going on three or four blocks over that was influencing the traffic pattern. Then we wrapped up all these considerations into an agreeable decision.” A temporary sign was erected and the changes in traffic pedestrian patterns measured.

Counterintuitively, Kincaid hopes that other women gain the confidence to pursue municipal leadership in part by witnessing her occasional gaffes. There’s a tremendous fear of making a mistake, she said, and public decision-making is no easy thing to begin with.

“Finally I had to say, ‘please excuse me for a minute while I find my place … But I hope that people, especially women, see that and say, ‘Oh, I don’t have to be infallible.’”

Even in 2015, another obstacle not to be underestimated is the responsibility and expectation of women in the home.

Gender roles within the family structure have been reassigned over the last few generation, but women still bear heavy responsibility for home management and child-rearing duties. Even when supportive partners step up, some female officials battle guilt when they come up short.

“It’s definitely a consideration. This isn’t a 9-to-5 job. There are frequent night meetings, long days, conferences,” said Bonnie Svrcek, deputy city manager of Lynchburg, Va. “It takes a family that’s on board, and even then it can be hard to let some things, some moments go on without you.”

Mentoring seems to play a role in the solution. In York, Pa., the example and support of fellow female politicians has resulted in several women — including two minorities — being elected to two council seats, the treasurer’s office, coroner’s office, city school board and the top job.

“We’ve worked hard to correct past imbalances. But we still need a better training ground for women to be involved in local politics,” said the city’s mayor, C. Kim Bracey. “We need to put more people in a position to make a difference.”

Female municipal officials are certainly more accepted and supported today, compared to 50 years ago. Kincaid noted, though, that they’re still operating under a paradigm set up and populated by men. So inevitably the question for a female candidate becomes: Can she compare to the male candidate? The question should simply be: Is she a good leader? 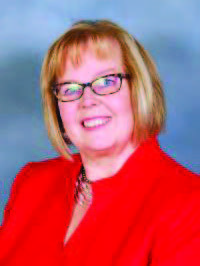 Bonnie Svrcek is one of 13 percent of local government professionals — city managers or deputy managers — who are female. As president of the International City/County Management Association, she commissioned research that explored the low level of interest among women in pursuing local government jobs. (Photo provided)

In 2011 Svrcek was elected to serve as president of City/County Management Association and became only the second female to lead the organization in its 99-year history. She was up to the challenge.

“I guess I thought, if there’s ever a time to look at why this is, it’s now,” she recalled. “It was a capital opportunity.”

Svrcek convened a two-year task force consisting of roughly 60 women “and a few brave men” who investigated several issues relevant to the question of female underrepresentation in CAO positions.

The argument goes that women bring different characteristics to the table than do their male counterparts. That’s “absolutely” true,” said Svrcek.

Some of the research uncovered in the report showed that, in the private sector, for example, when there’s a blend of genders the bottom line is stronger.” What is defined by profit and loss in the private sector is quantifiable by economic growth and development and quality of life.

The situation of professional city managers, Svrcek said, can’t be changed without the influenced of elected officials because, at the end of the day, they’re the ones who interact with executive recruiters for CAO positions and recommend a candidate.

Passing along the value she finds in her own relationship with Mayor Stephanie Rawlings-Blake of Baltimore, M.D., Mayor Bracey makes it a point to mentor females who are interested in seeking public office and those who are already involved but are aspiring to higher office.

“When I’m asked to speak to this issue to other women, I have to admit, I’m invigorated. I’m cognizant how, for me, it’s about those who will come after us.”

Bracey has also discovered a source of personal strength: faith and a family that keeps her grounded. They allow her to overcome traits such as lack of confidence and second guessing. She also looks for the day when women are represented in local government to the extent that the gender of an officeholder fails to make headlines.

“One day we’ll be past noting ‘She’s the first women, or African-American or Latina woman, elected to such-and-such a post.”