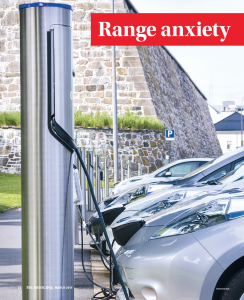 Electric and hybrid vehicles have unquestionably carved their place into the market of the immense and indispensable U.S. automobile industry.

They offer advantages, including environmental friendliness, quieter operation and fewer maintenance requirements. Their cost per mile can amount to a mere fraction of that of conventional vehicles. Two endemic impediments, however, have blunted their impact in the automotive world.

Electric and hybrid cars, vans and utility trucks cost significantly more than their internal combustion counterparts. Tax credits and governmental and private grants, however, can help alleviate the initial monetary outlay for purchase of the vehicles.

The second hurdle, though increasingly more illusory than actual, is still formidable: range anxiety. Range anxiety is analogous to the apprehensions of the first owners of internal combustion cars a century ago, when gas stations were sparse and fuel was not readily available, particularly on extended trips.

Today’s electric and hybrid automobiles can be recharged at the owner’s home overnight, but a reliable infrastructure of public charging stations is still embryonic outside the confines of larger, progressive cities.

The first electric cars offered a range of as little as 10 miles before battery depletion, but subsequent advances have achieved 50 to almost 100 miles. Hybrids, which employ a small internal combustion engine to assist in acceleration and recharge the battery en route, boast ranges pushing 300 miles between fill-ups.

The typical city dweller drives about 27 miles a day, with more than half of the trips being six or fewer miles in length and only one of 20 trips exceeding 30 miles. That places the average use pattern well within the range of most electric cars and all hybrids. Therefore, many industry experts discount the legitimacy of range anxiety for the average driver.

Any municipality considering the purchase or lease of an electric or hybrid vehicle should do the following: 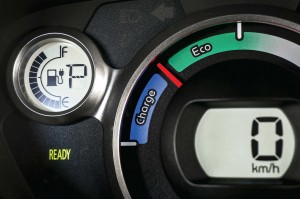 Electric vehicles are equipped with multiple and various gauges that give ample warning of a waning battery. However, most municipal employees will not drive farther than the range of an all-electric vehicle during the course of daily errands and rounds.

“On a normal day,” said Marc Geller, cofounder of Plug In America, “there’s absolutely no concern about range.”

With each passing year and new generation of the rapidly changing technology, more and more municipalities are testing — and adopting — electric and hybrid vehicles in their official fleets.
Indianapolis has plunged neck-deep into the fray. At Mayor Greg Ballard’s initiative, the city’s electric and hybrid vehicle fleet will grow to 425 by the end of the year, making it the largest such municipal fleet in the nation and saving the city an estimated $8.7 million in fuel costs over the next decade.

The 425 vehicles represent about 80 percent of the city’s total fleet, a significant surge toward the mayor’s goal to go all-electric for city employees by 2025. The only exception is police pursuit vehicles, which require more horsepower than electrical and hybrids cars can provide.

“This will be the largest project of its kind, times four,” said Michael Brylawski, the CEO of Vision Fleet, from whom the city will lease the cars.

Of course, not all municipalities can — or should — go all-in on the new breed of automobiles, but electric and hybrid vehicles may be a viable option depending on budget, need and supporting infrastructure.

Reliable summary statistics are not available for mileage requirements of municipal employees, because of wide usage variances between cities and even between municipal departments. It is unlikely, though, that such employees, particularly of small- to medium-sized cities, would exceed, in a typical workday, the range of most electric cars currently on the market.

One such officer’s daily routine may involve driving to his or her assigned area, inspecting several properties and responding to a few complaints, and driving back to the city building to spend the remainder of the workday completing paperwork. In such instances, the officer may not even reach double digits in total miles driven. Given that scenario, he or she may only need to recharge the municipal vehicle once a week.

Employees on continual patrol will, of course, drive more miles, but with proper planning should not approach the inconvenience of becoming stranded with a spent battery. More relevant to range anxiety is the use of the vehicle to attend out-of-town or out-of-state conferences other similar events, but again, adequately planning should alleviate and problems.

But what happens if my electric car DOES run out of charge?

Despite the fact that this scenario very rarely comes to fruition, and the fact that more charging stations are being built every day, the question still comes up.

As reported on www.treehugger.com, writer Robert Llewellyn used a Nissan Leaf to try and find out.

“The short answer is that the stated range isn’t really the range,” he said. “There’s a little hidden juice in there to limp you to a charging point somewhere (www.treehugger.com/cars/what-happens-when-nissan-leaf-runs-out-charge.html).

If you carry an adapter plug in the vehicle, you can also plug in pretty much anywhere – even a at a friendly residence — and charge back up, although it might take 2–3 hours and an appropriate amount of compensation to the home or business owner.

AAA also has charging services in most of the country. Where they don’t, they’re usually willing to tow.