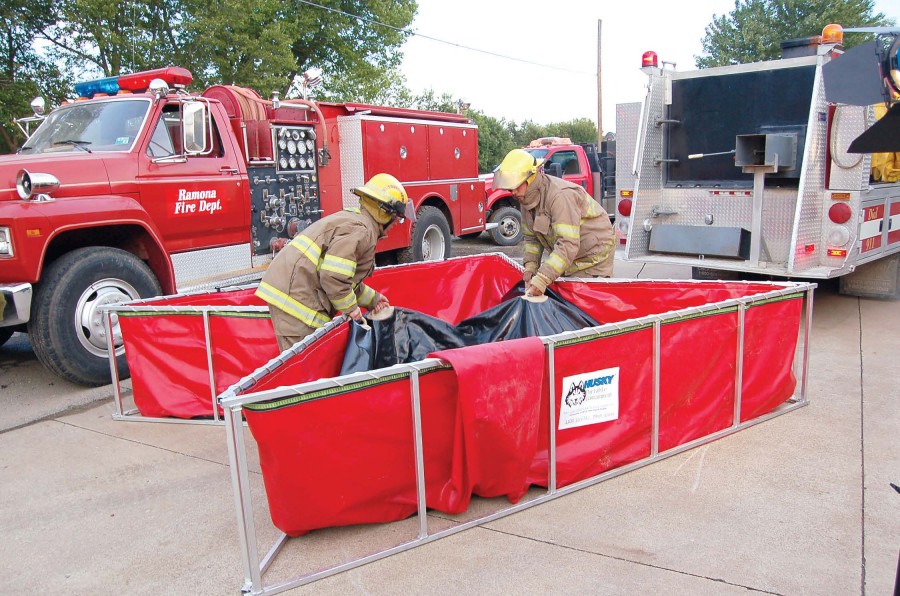 The good news is coming fast and furious for Husky Portable Containment, an innovator in the field of portable folding tanks for firefighting.

In the middle of last year the company received an approval for which it had been waiting more than eight years: U.S. Patent No. 8,746,478, (and other patents pending) was granted on its star product, Easy Lift Handles. A second patent was granted almost simultaneously to Husky for a product called Quick Dump, U.S. Patent No. 8,733,579, which allows firefighters to empty folding frame tanks quickly by releasing two D-rings and a latch. Three more patents are pending.

“We are very pleased to have received these two patents,” said Jay Claeys, president of Husky Portable Containment and co-owner of the company, together with his wife, Pam. “The portable liquid storage tank with Easy-Lift handles was especially gratifying in that this invention really was the catalyst that grabbed the firefighting community and bolstered Husky as a leading innovator in rural firefighting water handling.”

The Claeys received the dual patent news while completing another grand undertaking: In July the 10-year-old company moved in to a brand-new research and production facility in Bartlesville,

Okla. The new location is double the size of its previous home in nearby Dewey.

“We saw a substantial increase in sales for 2014, and the move into our new manufacturing facility brought our lead times down to two weeks for portable tanks and one week for salvage covers,” Claeys noted.

After two decades in the portable water tank industry, Claeys started Husky Portable Containment in 2004 at a location in Skiatook, Okla.

At first the fledgling company dedicated itself primarily to product research. Handles added to the portable tank concept are what put the company on the map.

“We came up with some good ideas, the handles being one,” said Claeys. By 2006 sales of its folding frame tanks, equipped with those handles, had exploded.

Although the water shuttle industry has been around a long time, he said, it wasn’t advanced in any way until Husky came along.

“We took a basic product and made it easier to use, more durable and safer. When we set these tanks up at trade shows, there’s hardly a firefighter that walks past our booth that doesn’t say ‘Man, that is a great idea.’”

In 2010 the company went a step further by designing Exlon. The 22-ounce per square yard material replaces the old Hypalon, which was discontinued in March of 2010. Exlon, which is exclusive to Husky, has excellent ultraviolet and abrasion qualities. It can also withstand cold climates, chemicals and diesel fuel and is stronger than any 22-ounce liner material.

One of Husky Portable Containment’s folding frame tanks spec’d for a new truck.

Husky is now a leading manufacturer of folding frame tanks, self-supporting tanks and other related products. One of its innovations, incorporated into the drain sleeve, is that the sleeve can be connected to either the inside or outside of the tank and is uniquely designed to lay over the top of the tank without damaging its shape. The customer can choose if he wants the sleeve to mount on the inside or outside.

Sales of Husky products went up substantially in 2014, and 2015 looks to be just as much of a banner year. Claeys believes its success is due to a combination of things.

“Our innovations and new designs lead the pack, but it has been our quality, customer service, flexibility with custom products and of course pricing that has established Husky as a leader in our industry. Customers can buy most products pertaining to water shuttle operations from us; we are getting close to that one-stop shop. We are constantly at work researching and designing new products paying attention to details.”

Patents held or pending for Husky Portable Containment are:

In 2013 Husky Portable Containment introduced Skinny Tank, a portable water tank that can be utilized on narrow back roads where the extra room is needed to get trucks by. Skinny Tank can be set up on one side of the road to let traffic through on the other.

The company went a step further by inventing the Leading Edge tank, a full-size, portable water tank that, after being fully deployed, can then be partially collapsed by two firefighters, in less than 15 seconds, to a narrower width that allows it to work like a Skinny Tank. Leading Edge tanks can be built in 8-foot or 9-foot collapsed widths by whatever length is required. The advantage of a Leading Edge tank is that it fits in an existing portable tank rack and can be used as a full-size tank until a narrower tank is needed.