Some cities hold occasional “Art in the Street” competitions during long summer days, where boulevards are closed off and chalk artists of all ages come out to play. Functional and longer-lasting heavy metal art doesn’t usually share the same space in the streets, however: that is, unless at some time a street department employee felt strongly about the benefits of creatively designed manhole covers.

Surprised? More and more municipalities are choosing to beautify their streets by using decorative manhole covers, grates and rings for several reasons, including drawing attention to their infrastructure and highlighting local artists by exhibiting their talents on the covers.
According to Adam San Solo, PE, director of sales at US Foundry in Medley, Fla., often wastewater, stormwater, utility, meter covers, etc., will have different designs, all within the same city.

“There is also quite a bit of ‘private’ development within a city, such as commercial property or private housing developments, where engineers can specify castings based on their own criteria,” he noted. 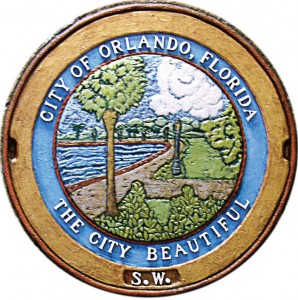 “The City Beautiful” is the first manhole cover relief done in color by artist Bobbi Mastrangelo and was exhibited in the Orlando Museum of Art in October. (Photo provided by Mastrangelo, from her Grate American Art portfolio) 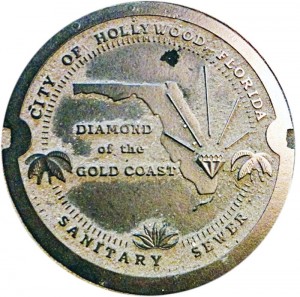 Pictured is a lid made for Hollywood, Fla. (Photo provided by US Foundry) 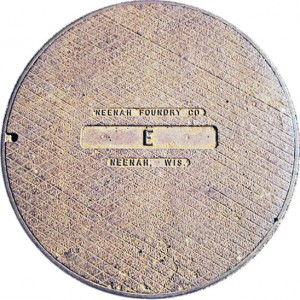 This manhole cover held special significance for those in its immediate vicinity. It was installed in Kuwait for the U.S. Army, which was stationed there. (Photo provided by Neenah Foundry) 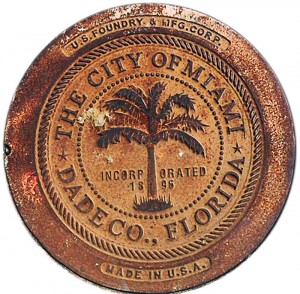 This manhole cover was produced for the city of Miami, Fla. (Photo provided by US Foundry)

Custom manhole covers are used by both large and small cities, San Solo said, and don’t usually cost any more than standard covers. “Castings are made by making an impression in sand and then filling the void with molten iron. Once the master tool is made, the sand doesn’t know the difference between an intricate or simple cover design.”

Cities customize covers for a variety of reasons: identification of ownership and as a deterrent for theft. Other purposes include using an ornamental manhole cover as part of a streetscape or a historical celebration. “It’s common for covers to bear at least the city name,” San Solo added.

The customization could be as simple as a name shown in plain text — “City of Atlanta” — to an elaborate design depicting the town logo or some item of local historical or social importance. “We have clock towers, trains, all kinds of animals and presidential silhouettes. St. Augustine, Fla., just commissioned a cover with 450 crosses on it to commemorate its 450th anniversary.”

Engineers are not the only ones interested in manhole covers. Bobbi Mastrangelo of Poinciana, Fla., is a retired schoolteacher who has gained international recognition for unusual art projects. She has been displayed in several prestigious art shows and museums globally and is listed in “Who’s Who in American Art.” One of her mixed media specialties is decorative manhole and water covers in urban settings, which she considers to be a way of “appreciating the technology and maintenance of our public utilities and roads, and promoting conservation and protection of our environment,” Mastrangelo said. 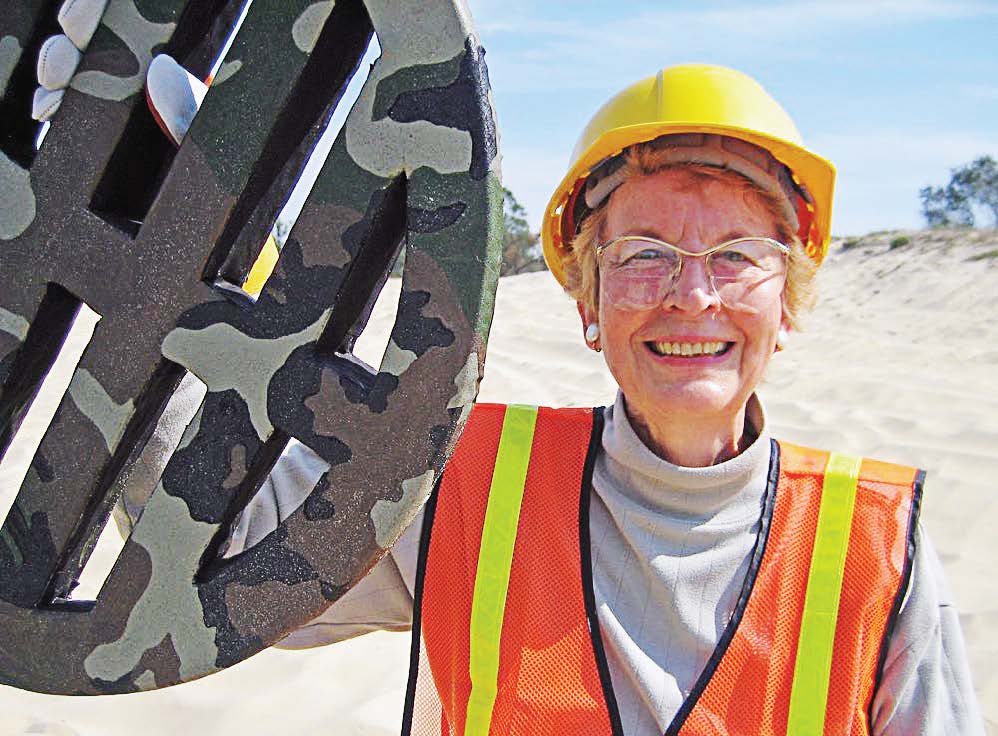 Metropolises that are considering having their own attractive grates may wish to encourage local artists to compete with unique cover art. There could even be citywide contests for elementary and high school students to have their art displayed on the lids. The field is wide open for designs of local landscapes, abstracts, legends, the seasons or municipal symbols. On the production end runs as small as 20 pieces are usually possible, and prototypes can be provided.

Some of Neenah Foundry’s covers have traveled overseas, and provoked unexpected reactions.
“We received a photo of one of our lids that was sent to us by an MP for the U.S. Army stationed in Kuwait,” Scott Hoffman, vice-president of the Municipal Products Group of Neenah Foundry, said. “The men in his unit step on the Neenah covers to feel as if they are standing on a piece of home while deployed in the Middle East.”

Foundry customers are often supply houses of concrete manufacturers, who will provide a scope of supply to the construction project, including casings. Cover pricing varies with size, weight, load rating and extras like bolts, seals or locks. A typical manhole cover might cost between $75 and $100, San Solo said, though that price would be higher once the distributor sells it to a contractor and the contractor sells it to a city.

Lee Ross, director of Water and Sewer Division in Rome, Ga., doesn’t know who did the drawing on his city’s decorative lids, because “the design is so old, it pre-dates my knowledge.”
“The city of Rome has an old water tower that is built into a clock tower, which is on the American Water Works Association’s historical list, so the design that was used celebrated that clock tower as it is the design on our manholes,” Ross said, adding that the new covers were well received by Rome’s citizens.

Cities considering updating their plain manhole covers to spiffier ones might keep in mind a fun bonus: Maybe these new pieces of heavy metal art will even show up in the local chamber of commerce’s tourism guides as part of its sightseeing attractions.