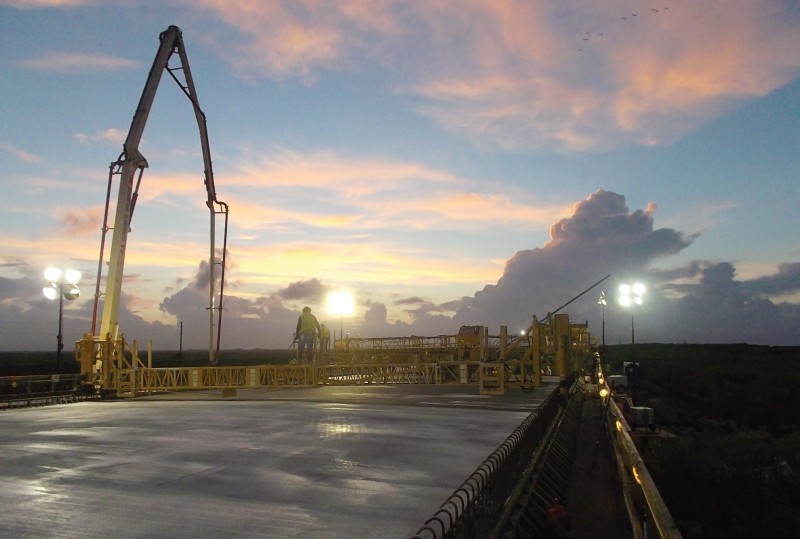 Internally cured concrete was used to rebuild this bridge in Virginia. (Photo provided by U.S. Army Corps of Engineers)

Internally cured concrete bridge decks last longer. Maintenance costs for these bridges are lower, as the bridges crack less due to weather and deicing salt. Because of these facts, many states are now exploring and implementing the process.

Traditional curing of cement involves applying water to the bridge’s surface, which strengthens it when the water and the concrete react. Internal curing is just what it sounds like — the concrete cures from the inside out. It has added water pockets due to replacing some of the sand with lightweight fine aggregate, and this means the water and concrete react even more closely. The result is stronger, more durable and more impervious to salt damage.

Because the concrete doesn’t crack due to dehydration, the resulting product is stronger and thus lasts longer. Using IC concrete not only reduces a bridge’s cost over time, but also increases its service life.

According to Jason Weiss, a professor of civil engineering and director of Purdue University’s Pankow Materials Laboratory, with IC concrete the amount of raw materials, such as Portland cement, can be reduced and replaced with silica fume, fly ash and limestone, reducing the carbon footprint of making concrete. Weiss was instrumental in the development of IC cement and pointed to a project that he and his fellow researchers recently undertook.

“(W)e showed that we can take 60 percent of the cement out of a typical bridge deck concrete and obtain similar, if not better, performance for bridges by taking advantage of the benefits internal curing provides.”

According to Daniel Cusson of the National Research Council Canada, IC bridge decks have a service life of 63 years: far longer than the 22 years for conventional concrete, or the 40 years for high-performance concrete.

This breakthrough, which was years in development, has states experimenting with the new procedure. New York has used it in the construction of multiple bridges — at least 20 — in the past few years, with positive results.

In January 2013, the Illinois State Tollway Authority chose a company to build the I-90 Bridge, specifying that materials be used to reduce or even eliminate the cracks that arise from shrinkage. Again, it was IC concrete to the rescue.

Most recently the Ohio Department of Transportation, responsible for the second largest bridge inventory in the nation, has worked up a proposal for 2015 to research IC concrete. ODOT
seeks to address the bridge deck cracking issue that, despite being previously researched in the state, remains unresolved.

“Several years ago, ODOT D12 cooperated on a research project that evaluated and documented the benefit of using internal curing to reduce bridge deck cracking,” said the proposal. “If bridge deck cracking can be significantly reduced, the service lives of bridge decks can be extended and bridge life cycle costs will be considerably lower. If a bridge deck can be constructed to last as long as the bridge substructure and superstructure, then redecking can be completely eliminated.” This is understandably attractive to a state with so many bridges to maintain.

The research proposal says that not only would the life cycle of bridges be extended, saving money, but it would also keep down traffic delays due to replacing the bridge deck.

While IC concrete results in slightly higher initial costs, the increase is not prohibitive. The price of projects only goes up by 10–12 percent, according to the price of the bridges built in both New York and Indiana, said chemical engineer Dale Bentz in a Purdue University press release. However, when considering the benefits, these costs are far outmatched by the value IC concrete provides.

With other states such as Georgia, Virginia, North Carolina and Utah either experimenting or already implementing with IC concrete, it may not only be the future of bridge curing, but very much the present.