↓
Home→Technology→Public-private partnerships for IT services 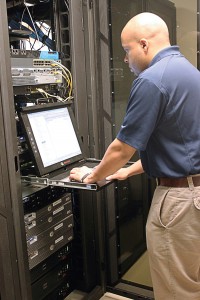 Ashley Smith, IT manager for Dunwoody, Ga., works on IT services for the city. (Photo provided)

For nearly a decade, public policy advocacy groups have highlighted the value of public-private partnerships for government entities. Although this approach was first used for large capital improvement projects, forward-thinking municipalities are realizing that the complexity and rapid pace of technology make IT services a perfect PPP target.

The benefits of outsourcing IT are well documented. Research firm Gartner found that a $96.14 million increase in IT outsourcing by organizations resulted, on average, in a $121.1 million drop in operating costs for non-IT functions. For municipalities, not only does outsourcing IT services reduce costs, it also spreads risk, enhances service delivery to citizenry and businesses, and improves operating capacity.

Last year four Illinois villages joined together to get better pricing on IT services. The vendor they selected, InterDev, worked closely with the Chicago-area villages.

InterDev provides IT services for more than 30 government entities across Georgia and Florida. The company was invited to bid and subsequently reached an agreement with the villages of Glenview, Buffalo Grove, Kenilworth and Lake Bluff in Illinois to provide services beginning in 2014.

Todd Hileman, village manager of Glenview, said the communities explored the idea in a request for information process, with a subsequent request for proposals process that resulted in a decision
to contract with the company.

“The consortium was particularly attractive to the village of Glenview because of the efficiencies we’ll gain by reducing our IT spending per user and eliminating duplicate IT systems, plus the improvements we’ll see in our purchasing power when we combine our procurement efforts,” he noted.

Amy Ahner, director of the administrative services department for the village, said, “We have the benefit of a modern approach. It’s ripe for collaboration.”

The four share a database analyst. With different environments, each had to document then identify initial inventory; but those analysis led to key opportunities. “You do a lot of work up front,” she noted. Another strategy was to not phase in at the same time, she said, but rather over six months, one at a time.

The next phase was implementation. Ahner is in the middle of a 90-day plan identifying five key areas and implementing the shared IT services.

“Staff hiring was the biggest challenge,” she noted. The benefits of outsourcing IT functions through a PPP extend beyond the actual technology itself when the move is made collaboratively with other towns and cities.

“One of the core benefits of shared services is the ability to gain access to resources ranging from help desk and network administrator all the way up through security engineer and CIO,” said InterDev CEO Gary Nichols. “Government entities are increasingly turning to the private sector to enhance services to their citizens while still controlling costs.”

Billy Grogan, acting city manager and chief of police for Dunwoody, Ga., said his city uses a split contract model for its IT services. A split contract model means multiple vendors provide multiple services. Being a relatively new city — Dunwoody was formed Dec. 1, 2008 — the model had plenty of benefits. While the incorporation was being planned, Grogan found that most services were “pretty pricy and cost prohibitive.” 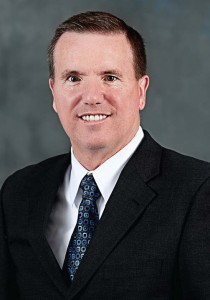 InterDev handles all IT-related issues, rather than the city of 46,267 having to hire IT employees. “That’s a savings for us,” he said, especially when it comes to specialty IT issues. “They have those resources,” Grogan said. Dunwoody also found it handy that its neighbor, Sandy Springs, Ga., uses the same software.

Sharon Kraun, director of communications for Sandy Springs, said that when Sandy Springs became a city, it had a single company provide its outsourced services, from public works to IT. It paid a single fee for all services. But in 2010 the city undertook an extensive procurement process, which resulted in multiple contracts for city services. The city recognized $7 million per year in overall savings, she noted.

“While we have multiple providers for services, we function on a day-to-day basis as one entity, using common city software,” she said. “For example, I work for The Collaborative on the Sandy Springs contract, providing communications services. My computer and the needed software programs are all provided by the city for the work I do on behalf of the city of Sandy Springs. If I were to do work for another Collaborative client, I would use equipment/software provided by The Collaborative.”