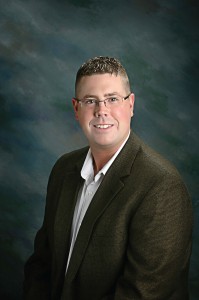 Active in Carroll, Iowa, community organizations for years, local businessman Adam Schweers became a city councilman in 2009 and mayor in 2011. He recently ran for the District 6 seat in the Iowa Senate as well. (Photo provided)

If you want to talk to the mayor of Carroll, Iowa, on a random weekday, don’t call city hall. He won’t be there.

If he’s not out in the community or traveling on official business, Adam Schweers, 35, can usually be found at his day job: president of Computer Concepts of Iowa, the information technology company he began in 2005.

With the experience of business ownership already under his belt, Schweers had no plans to throw his hat into the ring and run for political office. However, after volunteering in different capacities and serving in leadership positions with the local Rotary Club, he felt that he had something more to offer.

“I really started following what was going on in the community, and it occurred to me that what we lacked were younger people getting involved and participating in the process,” he said. “I decided to do something about it.” When a member of the city council retired and no one stepped forward to take his place, that was his cue.

Schweers was born and raised in Arcadia, where he enjoyed the benefits of small-town life and its strong sense of community. He’s been married to his wife, Jill, for 14 years and together they have two boys, Bennett and Camron. In addition to starting Computer Concepts, he launched Midwest Data Management in 2008 and became very active in community organizations.

“I said that I would be happy to serve,” he recalled. “I understood a lot about budgets, IT and finance, and I thought I could contribute something to the council.”

He proved that he could contribute something to the entire community. During his time as Ward 1 city councilman, he was incredibly busy serving as liaison to the council for the Parks, Recreation and Cultural Board and the New Hope Village board of directors, in addition to being the community service chairperson and president of the Carroll Rotary. He was on the steering committee and served as professional development chairperson for the Carroll Young Professionals and served on the Young Professionals of Iowa state board. He assisted the community of Denison to start its own young professionals group; was the citizen adviser for the governor-appointed massage therapy board; represented Carroll in Washington, D.C., from both a city and telecommunications perspective; served on the Mid-American Council for the Boy Scouts of America; and was very active in the Carroll Chamber of Commerce.

“I tried to do as much as I could,” he said. “After about two years of being on the city council, the mayor retired. I kind of waited to see who would take his place, and after actively talking to others who felt it was not the right time for them, I threw my hat into the ring again.”

In the two terms that he has been Carroll’s mayor, Schweers continues to be involved with a lot of different organizations and initiatives, including the Iowa League of Cities and the Blue Zone Project, a wellness initiative designed to create healthier cities. He has also been working with the city council to create a plan to mitigate the horn noise coming from a Union Pacific rail line that runs alongside the city. 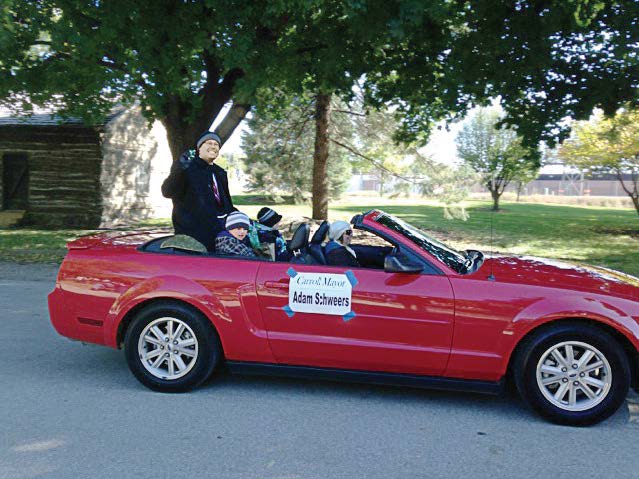 Schweers and his family participate in the city’s annual Band Day parade on a chilly day in October. The parade, which is organized by the Carroll Chamber of Commerce, has been celebrating local high school and junior high bands since 1958.

Schweers said that Carroll has eight intersections with the railroad. The resulting noise at each has become a quality of life issue for the citizens of the community. The city council contracted engineers Bolton and Menk Inc. to study the problem and offer potential solutions regarding the train noise. They came up with five scenarios that ranged in cost from $370,000 to $480,000.
“At first we thought it wouldn’t be economically feasible,” Schweers said, noting that initial quotes were in the millions. “But it looks like we will be able to complete the project for under $500,000.”

Another initiative that he is very proud of was his work with a group of fifth-grade students who wanted to bring a dog park to the city. He organized a team of attorneys, as well as members of the Rotary, who walked the kids through the process of raising funds and pitching the idea to the city council. They got to see firsthand how a city plans for new infrastructure and what all has to be considered before calling canines to commune.

“Unfortunately, the city council wasn’t warm to the idea, but sometimes in politics, timing is everything,” he said. “Eventually, the dog park will happen, and when it does, every kid who worked on it will know that they had a hand in making it happen.”

Although he admits to working a lot of long hours when he’s not attending to city matters or his business interests, Schweers said he likes to spend time with his family and friends. He said that the secret to his success is his wife, who keeps things organized at the office when his world may be going in 40 directions at once. He doesn’t mind the hustle and bustle, though. In fact, he seems to thrive on it.

“I truly like what I do, and I think that shows. Sure, I get up early and I have a lot of late nights, but I am lucky. I like people. I don’t need a lot of sleep. I manage my time well, and I use every minute that I can,” he said.