Geographic information systems have been incorporated into the administration of most cities and towns. Those systems are being used to map jurisdictions’ real estate parcels, complete with zoning and property tax information. But once an entity has the map and those essential data sets, how much more use can be drawn out of the system?

Plenty, said industry consultants. But it depends upon how accurate the original maps are to begin with.

“Very few GIS maps exist today that were done using accurate land survey from the beginning,” lamented Rick Harrison, a land planner since 1968. “Google Earth and its rivals, MapQuest and BingMaps, have unfortunately become the basis for site information,” he said. “None of this information is likely to be accurate enough to be useful to an engineer or surveyor.”

But things have improved since Harrison made that statement three years ago. Brian Stevens, project manager in the geospatial division of Woolpert Inc. in Columbus, Ohio, hails the advent of LIDAR, which, depending upon whom one asks, stands for “light detection and ranging” or is a combined form of “light radar.” With LIDAR, “we are getting a very accurate model of the surface of the earth,” he said. 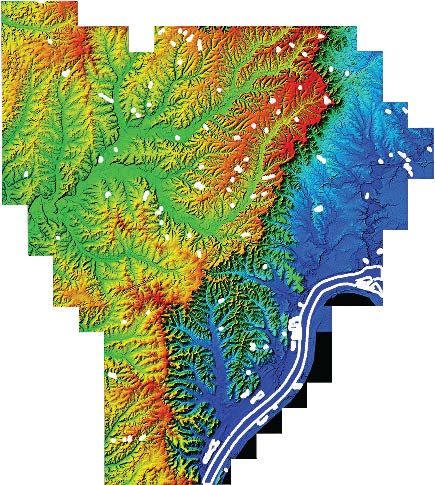 This lidar map of Floyd County in southeast Indiana distinguishes topography by color, red being the highest elevation, blue the lowest. The white areas are lakes and the white lines represent the borders of a river. The sensors can differentiate thousands of shades of color inside and outside the visible light spectrum, yielding an extremely accurate layout of the contour of the land. (Screen shot from maps.woolpert.com)

LIDAR involves the rapid emission of laser pulses — up to 150,000 per second — throughout the color spectrum from an aircraft that is usually flying at 6,000 to 7,000 feet and analyzing the pingback to paint a contoured topographic image of the surface. The system can cover an area with a grid of pulses only three inches apart.

The system’s remote sensors receive the reflections adjust for the speed and direction of the plane and the angle of incidence of the pulses, eliminating spatial distortions on the resulting image.

The new technology provides “better consistency, imaging, resolution and scale,” according to Stevens. “Things are being done in an automated fashion,” he said, much to the enhanced benefit of cities, counties and states, which can now quite literally operate from the same digital page.

Adding this weapon to a municipality’s arsenal can open a multiplicity of avenues of analysis, planning and implementation. LIDAR imaging is not cheap but, considering the administrative versatility it provides, it may well be worth the investment. The key is to “fly it once and use it many times,” said Stevens.

Often as a town or city grows, the increased footprint of impermeable surfaces within or adjacent to the jurisdiction can alter the rate of seepage of rainwater and flow of groundwater. Updating the configuration and location of such surfaces can be labor intensive and time consuming.

LIDAR not only maps such surfaces, but also accurately records the topography and soil makeup of the surrounding permeable areas. All this information is available through a simple computer inquiry, and by programming in the correct algorithms, the system can instantly simulate the speed, depth and direction of water flow for any level of precipitation. This information can be used to efficiently place ditches, culverts, levees and other remediable measures to minimize erosion and property damage.

LIDAR is also capable of precisely calculating the surface area and slope of the roofs of buildings within the analysis area. Interfacing these statistics with information about the arc of the sun at the municipality’s latitude can yield reliable computer-generated recommendations for the most profitable placement of solar panels within the jurisdiction.

Stevens suggested that a solid beginning to expand the capabilities of a municipality’s GIS is to encourage interdepartmental cooperation.

“What I see a lot of is that the GIS is operating out of auditors’ offices or assessors’ offices. They have their own objective in parcel mapping. Sometimes the engineers get on board and sometimes they do not.”

With increasing effectiveness in mapping technology; variegated algorithmic capacities to manipulate and analyze multiple layers of collected data; and new opportunities for public involvement through interactive websites, now may be the time to take a fresh look at GIS to see what else it can do.