While feathered friends are among the more attractive ingredients of a city’s flora and fauna, they present challenges. Birds cause an incalculable number of dollars to be spent each year in cleaning, maintenance, repairs and remediation of avian-generated health problems. Many of those dollars are unanticipated and unbudgeted, since not many municipalities have a line item allocation for cleaning up bird messes. The dangers and inconveniences resulting from infestation by pest birds are real and varied. Bird feces are highly acidic and have a corrosive effect on buildings, structures and finishes. Consequences can range from diminished aesthetics to structural collapse. Fresh bird droppings present a slip-and-fall liability; dried feces, when kicked up, release infectious particles into the air. More than 60 diseases, including salmonella and encephalitis, can be transmitted from birds to humans this way. Some ailments are acquired by breathing in fungal spores from dried feces, others are acquired by inadvertent ingestion, such as when Junior puts his hand in a bird dropping on a park bench or piece of playground equipment, then reaches into the bag of chips on the family picnic table. 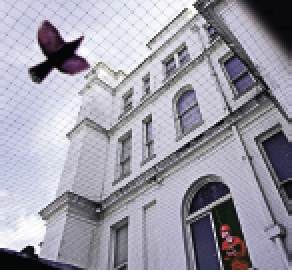 Bird-related costs include cleaning, maintenance, repairs and
remediation of avian-generated health problems. Many of those dollars are unanticipated and unbudgeted. (Photo courtesy Rentokil North America)

Parasites and other biting insects can also migrate from pest birds to humans when the two are in continual proximity, and bird nests can clog drain pipes and block ventilation systems, leading to disruption of utility services and even causing fires.

Unsightly evidence of bird population can reduce a municipality’s attractiveness, repulsing residents and visitors while robbing the city coffers and local businesses of tourist income.

Federal law protects most avian species against nonpermit trapping and killing. The Migratory Bird Treaty Act makes it illegal to “take, possess, import, export, transport, sell, purchase, barter, or offer for sale, purchase, or barter, any migratory bird, or the parts, nests, or eggs of such a bird except under the terms of a valid permit issued” under federal regulations.

Those regulations list over 2,000 protected species, so any municipality looking to address a bird problem should consult its county extension office or a federal agent of the U.S. Fish and Wildlife Service. Fortunately, the most common nuisance birds pigeons, sparrows and starlings are exempt from federal and state regulation, though local ordinances may apply.

Many devices and procedures have been developed to address the challenge of pest bird invasion.

First, the captured, injured and killed birds had to be properly disposed of. This led to the second problem: charges of animal cruelty by animal rights groups and accusations of generating harmful pollution by environmentalists. Finally, the techniques simply addressed the symptom; they did not teach the birds to stay away for good.

Today’s methods of addressing pest bird invasion are more humane and are tailored toward long-term solutions. They’re not without complications, however.

“Bird control in a municipal environment is a sensitive situation,” said Kim Lewis, bird division manager at Rentokil North America. He described the obstacle course of competing interests he has encountered in his 28 years with the Reading, Pa.-based company.

“You have people who love birds, animal rights groups and municipalities getting complaints from businesses and residents. It’s a public relations situation, which can get ‘really touchy,’” he said.

Lewis recommended the following for any municipality contemplating a program of pest bird remediation:

“First, be conscious of the sensitivities of bird control. Make sure that you’re doing what is humane, discreet and effective. Educate the public. Tell them ‘Please do not feed the birds.’

“Have an expert conduct a formal inspection, evaluate the situation and make recommendations based on the criteria of the municipality. Reach out to an expert who can help you consider all the variables.”

The most effective way to reduce or eliminate the problem is to prevent the unwelcome creatures from landing on city property in the first place. If they have already nested, the strategy is to make their habitat so inhospitable they will relocate. In either event, the best approach is a multifaceted simultaneous assault on several or all of the birds’ senses: sight, hearing, touch, taste and smell.

An active deterrent program for nuisance birds may include physical barriers such as netting, spikes, roost-inhibiting gel and slopes. Additionally, visual scare devices such as predator replicas and iridescent reflective foil are both popular and inexpensive. (Photo courtesy Rentokil North America)

Lewis divides the approaches into two categories. An active program is designed to move the birds physically or through behavior modification. A passive program involves the tactics of exclusion and building them out by creating an atmosphere that’s undesirable.

One common approach to resolving a pest bird problem is to erect physical barriers.

Bird netting, which is available in various sizes and mesh densities designed for specific species, is a 100-percent-effective exclusionary tactic.

Bird spikes can be installed on any surface where birds perch or roost. Simple to install and made of either stainless steel or translucent plastic, they project from rooftops, ledges and window sills, rendering the surfaces uninviting to birds seeking a landing strip.

Roost-inhibiting gel is another option. The discreet gel makes surfaces sticky and presents a nuisance to the birds, but must be reapplied several times a year.

Bird slopes are easily installed structural accoutrements. Made of slippery PVC, the panels are mounted at a 45-degree angle to eaves, ledges and beams. When birds try to land, they slide off and eventually quit trying.

Visual scare devices are both popular and inexpensive. They include strategically placed predator replicas, iridescent reflective foil, flash tape and inflatable balloons with reflective predator eyes. For best effect, the devices must incorporate random motion and should be relocated frequently.

Sound both sonic and ultrasonic can also effectively drive away pest birds. Recordings may include sounds of predators or distress and alarm calls of the targeted species. Pyrotechnic devices present a one-two punch of irritating flash and noise.

Liquid and granular repellents can be sprinkled on pest bird food sources. Typically, such applications, though harmless to the birds, render the food sources unpalatable and irritate their olfactory systems.

It may be, though, that technology provide will provide most humane and longest-lasting solution yet.

Ovocontrol, a recently registered product, is essentially “birth control for pigeons,” according to Lewis. The product is served up daily for consumption by female birds during breeding season, and the product’s chemicals prevent their eggs from developing. “It’s a humane way of decreasing the population,” said Lewis, adding, “It kind of meets the needs of both sides” of the bird control debate.