The cost of powering homes, farms and businesses has increased exponentially during the past 30 years. To combat the uncertainty, or in many cases to create a more “green” environment, residents and business owners have turned to solar as an alternative energy source. According to Brendan Dunn of Deep Blue Training Associates, since early 2000 the production of photovoltaics doubled every two years until 2008, when it doubled in just one year.

Improper installation of solar panels is one of the greatest risk factors related to arc-faults that cause fire at residential and commercial sites. (Shutterstock photo)

One aspect of PV systems that is not often considered is the safety factor, most notably the risk of fire. While not necessarily a greater risk than other energy arrangements, photovoltaic systems do require special consideration by fire departments and first responders in the instance of an unexpected combustion.

Dunn noted that electrical shock presents the paramount hazard when dealing with solar power. More importantly, Dunn pointed out, “power from the grid can be controlled and de-energized. Power from distributed power generation (solar) present serious challenges for emergency responders.”

It has been proven that artificial illumination and extensive fire can provide enough illumination to generate electricity in a PV module, although low ambient light, such as full moonlight, cannot. Dunn pointed out that firefighters must realize that when a PV module is damaged overnight, as soon as the sun rises electrical generation will once again start.

Additionally, lightning may cause a power surge during nighttime operations when the system would be normally off. If electrical storms are occurring during firefighting operations at night, PV modules should be treated as though they are energized.

“Emergency responders must always treat solar powered systems as energized,” he warned. “They must also realize that during a fire these units may become damaged, exposing them to live electrical conductors.

“Although solar power systems will have disconnects, these disconnects will only isolate power and will keep power from the building circuitry. The amount of energy is dependent on the size of the system; a large commercial system generates much more energy than your typical residential system. More modules equals more energy.”

Any size solar power system can produce enough energy to be lethal. To minimize or eliminate the electrical output from PV solar modules, departments should cover the module with a 100 percent light-blocking tarp.

Dunn also recommends that emergency personnel wear a self-contained breathing apparatus since the smoke generated by burning materials used to construct the PV modules may be toxic. He also suggests that the handling of materials from PV modules should be done with full protective clothing on, as they present a dermal exposure.

Naturally, the best way to combat the problem of fire in photovoltaic systems is to never have the fire begin in the first place. While the cause of some fires is unavoidable, such as those resulting natural occurrences or unforeseen circumstances, residents can take steps to minimize the risks.

Most modern PV systems do not use batteries. Encouraging the selection of battery-free systems greatly reduces the risk of self-combustion fires. This setup, however, requires remaining on an electrical “grid,” which sometimes is not an option in rural settings. Physically, battery-free systems produce electricity for use on site or for transmission to the local utility.

Proper installation of roof-mounted PV systems is tantamount to safety. In his 2010 article, “Fires Caused by Solar PV Systems: Reducing the Risk,” IDC Energy Industry Insights Community Research Manager Jay Holman noted that “improper installation is consistently identified as one of the greatest risk factors related to arc-faults, so ensuring installers are well qualified and having the installation inspected once it is completed are the two steps that are likely to have the greatest impact on arc-fault risk.” 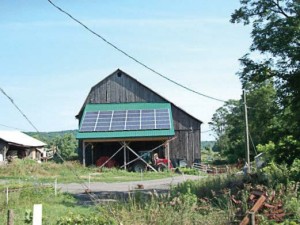 An increase in the number of homes, businesses and even farms installing solar panels means all fire departments should be prepared to combat the unique electric fires that can result. (Photo provided by Deep Blue Training Associates)The Renewable Energy Corporation offers several tips for fire departments to disseminate to the public for the purpose of reducing the risk of PV system fires. Consider posting them to Facebook, perhaps.