Pulse feedback disruptions caused by wind farms can result in the triggering of unnecessary severe storm, tornado and flash flood warnings or, conversely, delays in issuing such warnings when they are justified. (Alastair Wallace / Shutterstock.com)

Wind farms, those sprawling orchards of sleek, towering energy generators, now dot the country. Necessitated by a growing consumer demand for clean, renewable energy sources and incentivized by government subsidies and favorable tax treatment, their construction meets with general approval. The main objection is that they diminish the aesthetic enjoyment of the surrounding landscape.

But wind turbines are, at least for the foreseeable future, the natural enemy of nearby weather radars.

In 1998 the National Weather Service installed Doppler radar as the centerpiece of its weather forecasting arsenal. Since then, most weather analysis has involved detecting wind and precipitation direction, speed and intensity by beaming pulses of powerful microwaves at up to 1,300 per second and analyzing the ping back as the pulses reflect off of raindrops, buildings, trees and other objects. The received data is filtered through the weather station’s computer program, which runs an algorithm to paint a picture of the weather as it is and, predictively, as it will be.

The software can be programmed to nullify the reflective clutter of stationary objects such as barns, houses and other structures. Wind turbine blades are seldom stationary, however, and thus cannot be filtered out. They move at varying speeds, with the blade tips sometimes reaching 100 miles per hour. The hub of the blade assembly, by comparison, hardly moves at all.

Pulse feedback from the swirling blades occasionally distorts data reception, resulting in readings of high winds and excessive precipitation where none exist. This can result in a cascade of erroneous consequences, as the computer program interprets the input as rotating winds and heavy precipitation, sometimes triggering unnecessary severe storm, tornado and flash flood warnings for a community. Conversely, blockage of downrange signal echoes caused by wind farm structures can inhibit radar’s ability to see the approach of a distant storm, cause a delay in issuing such warnings when they are justified.

Refining the software to remove wind turbine clutter while preserving the true weather returns is likely several years away, say experts. For now, the industries of wind power and weather forecasting have to carve a synthesis of interests to maintain a peaceful coexistence. Where to start is the question.

Edward Ciardi is a deputy radar focal point at the radar operations center in Norman, Okla. He has been with noaa since 1992 and has dealt with wind farm issues since 2008.

“Around each NEXRAD (Doppler weather radar) are impact zones,” he said, describing them from the smallest zone to the largest:

1. The “no-build zone” includes a circle with the radius of 1.8 miles around the weather station. Ideally, no wind farms can be constructed within this zone.

2. The “mitigation zone” is a terrain-dependent and distance-dependent zone circumscribed on a case-by-case basis. Wind turbines should be limited in height in this zone so as not to disrupt the scan of the Doppler. 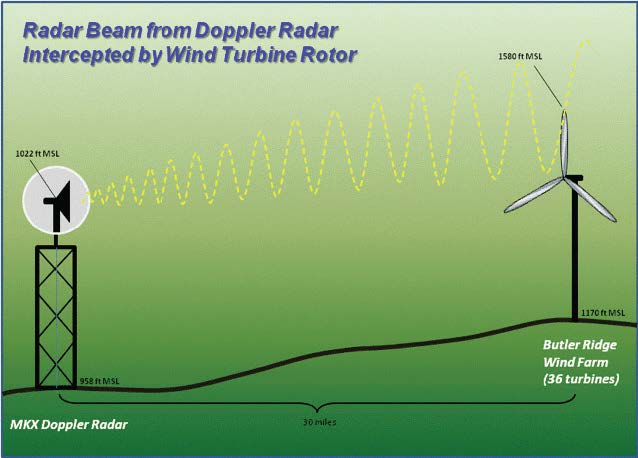 Wind farms built in what’s called the “consultation,” or third zone of impact around a Doppler weather radar station, produce the largest amount of radar clutter. (Image courtesy of NOAA)

“The radar band is one degree wide,” Ciardi said. “The scan starts at one-half degree above the horizon, and continues in consecutive sweeps up to 19.5 degrees. Each sweep elevates the radar signal one-half a degree. It takes about five minutes to complete all elevations of the scan. The range of reflectivity is 248 miles. After that, you can only see the top of the storm.”

3. The “consultation zone” extends at least 22.4 miles, “but can go farther if the terrain rises,” said Ciardi. Anyone planning to build a wind farm in this zone, “we want to talk to you. We are not as concerned with clutter in the first scan angle of 0.5 degrees. We are more concerned when the turbines start to impact the second scan angle.”

4. The “notification zone” is entirely terrain dependent and extends out to 37.3 miles. At this range, turbines can be seen only in the first scan angle. “We just want to be notified,” Ciardi said. “We can calculate the height and footprint of the wind farm and exclude it.”

The zones are somewhat theoretical, because “there is no legal statute that prevents a developer from interfering with radars,” according to Ciardi. “If they’re building on private land, we cannot stop them.”

Local government entities can put a halt to potentially disruptive wind farms by withholding permits. A more palatable alternative, however, is to require developers to satisfy all National Weather Service requirements before issuing a permit.

“One of the issues we have is the Anti-Lobbying Act, which prevents the federal government from influencing other levels of government. We can present the facts and then leave the decision to them,” Ciardi said. So, NOAA acts more like an information clearinghouse than an enforcement agency. “We do an analysis on impacts, then send our report to the developer, usually through the National Telecommunications and Information Administration.”

Progress is being made, however. “We are convincing the industry to not build too close,” Ciardi said. NOAA is also providing online help for developers. “We have a software tool on the FAA obstruction website that developers can access, put in their information and get their zone. Then they can contact us.”

Another factor, which may mitigate potential future skirmishes, is that the number of Doppler radars in use in the country is pretty much set. There are currently 160 and, according to Ciardi, “unless Congress demands that we put one somewhere, we are pretty much satisfied.”