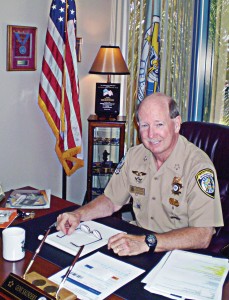 Project Lifesaver International has an envious record of swift responses for locating wandering children and adults who have autism, Alzheimer’s disease, Down syndrome and other conditions. At-risk people have been found within minutes, and all within one hour, in the states of Virginia, New York, New Jersey and Arkansas where the program is active.

Saunders retired as captain from the Chesapeake, Va., Police Department in 2001. During his 33-year career, he served as commander of Special Operations, which included swat and search and rescue. He became troubled by the number of searches for Alzheimer’s patients, for which his department had no expertise, resulting in many tragic endings — also costing money and manpower. 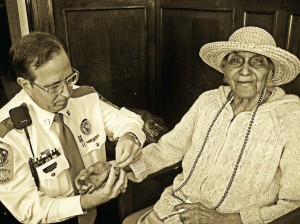 “I placed the first transmitter in 1999 and the program grew … now we are in more than 1,300 agencies and have seen our members rescue more than 2,700 at-risk wanderers,” he said.

Project Lifesaver differs from other search programs in many ways. It’s a program, not a product; and it incorporates training, education, certification and support for member agencies.

“This gentleman, who wore a radio-tracking wristband, had dementia and climbed up a closet and into the ceiling,” recalled Saunders. “Before climbing into the closet he had locked the door behind him. When I entered his room to look for him, the only locked door was the closet and the signal was coming from that area. But they hadn’t searched it because it was a locked door.”

A staff member unlocked it and the man was found lying across support elements of the closet walls.

Paul Ballance, of the Norfolk, Va., Sheriff’s Office, is a national instructor of PLI and has trained several people in other counties.

“In addition to using radio trackers, we also employ other methods when necessary,” said Ballance. One such instance involved a client with a radio tracker whose battery had been allowed to die.

“We called in a K-9 and got some articles of clothing and went to where the gentleman was last seen. It was a cold, rainy 20-degree night, and we tracked the scent from the last place the client was seen, about 7 miles to the other end of town — actually to the shore of the water, where both dog and handler were completely worn out.”

Shelby County, Ky., Judge-Executive Rob Rothenburger was one of Ballance’s newer trainees. The county, population 43,500, is in its sixth month of completing training and is now ready to accept clients into the program.

“We heard about this program through law enforcement and other rescue groups,” said Rothenburger. “We had two days of very intensive training, both classroom and practical. It will be valuable to us, because we have seen an increase of Alzheimer’s patients wandering away from their facility and it’s been of concern to us.”

Rothenburger said other communities would do well to check into PLI’s website and enroll in the program. “The equipment is very simple to operate and it doesn’t cost a lot to get involved. The biggest commitment is time and dedication.”

The program and equipment are appropriate for any area and are more suitable than GPS for rural areas and smaller cities, said Saunders. He added that radio tracking is more reliable than GPS “because the signal can’t be blocked by solid objects, as GPS can, plus GPS is slower to get to a location when it does work.” For example, PLI’s search technology takes searchers not just to a stadium — but to row W, seat 43 if need be, Ballance said.

Sergeant Amanda Lee Jordan of the Richland County, S.C., Sheriff’s Department speaks to community groups such as Rotarians, and noted that some of these groups fund PLI.

“The public is really excited about our program, and it is a good way for the agency to bond with the public, and for us to give back to the community. The huge peace of mind PLI affords caregivers of at-risk wanderers is unbelievable.”