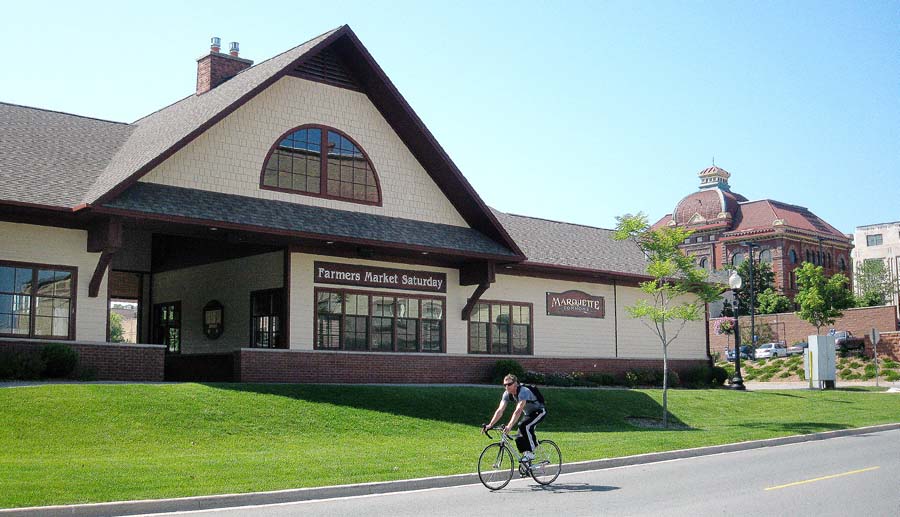 Marquette Commons is a 12,000 square feet pedestrian plaza/outdoor ice rink and publicly-support building that includes an indoor fireplace, public restrooms and a public artist-designed fountain — the first outdoor public art in the downtown area. The Commons provides a community gathering spot with year-round activities including a farmer’s market, concerts in the summer and skating in the winter. (Photo by Jen LePage)

Placemaking continues to grow nationwide in municipalities like New York City, N.Y.; Rochester, Minn.; and Cleveland, Ohio; and even internationally, from South Korea and Hong Kong to Canada and the United Arab Emirates. While not a new concept, it encourages municipal officials, designers, planners and engineers to broaden their view on what makes a good public space.

Placemaking “is a multi-faceted approach to the planning, design and management of public spaces,” according to the Project for Public Spaces’ website. This approach focuses on community needs and opening a dialogue between all stakeholders, including designers/engineers, municipal officials and community members. The goal is simple: highlight a community’s values and assets while creating a place people want to use, not a space plagued with traffic-dominated streets, isolated and inaccessible parks or other common design problems.

“The vision can evolve quickly into an implementation strategy, beginning with small-scale, doable improvements that can immediately bring benefits to public spaces and the people who use them,” PPS’s website states. “Placemaking capitalizes on a local community’s assets, inspirations and potential, ultimately creating good public spaces that promote people’s health, happiness and well-being.”

As part of the process, Michigan looked at cities like Seattle, Wash., and Portland, Ore., which were experiencing success. One thing it found right away was college graduates were looking for homes before looking for jobs. To attract those graduates, Michigan officials knew the state needed to have good places to live.

MML identified eight assets for communities to grow and strengthen: physical design and walkability; green initiatives; cultural economic development; entrepreneurship; multiculturalism; messaging and technology; transit; and education. It launched the Center for 21st Century Communities to assist local officials in identifying, developing and implementing programs and strategies to enhance the state’s communities as vibrant places for the 21st century by focusing on those eight assets. 21c3 also supports legislative goals of the MML’s Prosperity Agenda, which, if approved, will create thousands of new jobs in the state, generate billions of dollars in new commercial and residential investments and create the types of communities Michigan needs to prosper.

The MML has partnered with the Michigan State Housing Development Authority, Small Business Association of Michigan and other organizations to form MIplace.org, a statewide initiative designed to keep Michigan at the forefront of the national placemaking movement. The site showcases placemaking work while aiming to continue improving Michigan communities.

“We are working on educating both the public and private sector about placemaking,” said Weinfield, noting it is an evolving process. “I think we are making progress.” Weinfield stated the MML continually offers education for local officials across the state and for members of other organizations.

For Marquette, placemaking is about finding the right balance for all demands, according to city manager Bill Vajda. The city’s economy, along with much of Michigan’s Upper Peninsula, has centered around heritage industries that relied on natural resources like timber, mines and pelts. “Over time those industries have been replaced,” said Vajda.

Marquette, the regional seat of government, headquarters many services and is the UP’s regional hub for health care, hosts a university and a large financial-banking hub. “All those legacy industries were replaced by white-collar industries.”

The change has resulted in the old railroad tracks that once carried iron ore to port being pulled up. “Bankers, doctors and students are looking for pocket parks and a connection to the water,” said Vajda. “We have been repurposing a lot of the industrial and replacing it with the demands of (whitecollar workers). We are starting to see a lot of fruit come to bear.”

To appeal to constituents and visitors alike, Marquette provides many recreational opportunities and ways to connect with nature, including 30 miles of beaches, 80 parks and more than 100 miles of trails throughout the region. One of those is the North Country National Scenic Trail. Boating is another popular pastime, and Marquette offers a state water preserve perfect for scuba diving. The city even made a $5 million investment to preserve an entire river valley for posterity.

While some signs of the past have been removed, Marquette promotes preservation of its past, including utilizing sandstone architecture, one of the city’s first exports. Marquette’s Downtown Development Authority has played a role in preserving historic buildings downtown. “Understanding the values of the community is very important,” said Vajda, adding in Marquette there is a sense of pride about the city’s history.

Local property owners have also invested in their buildings, many choosing to preserve their property’s character. Additionally, the city has seen new development in the last few years. “Our government hospital was purchased by a for-profit entity, which is expanding it regionally,” said Vajda, noting there are also three different office, residential and commercial developments. “There is a lot of building and investments.”

Vajda noted the importance of remaining rooted and striking an equal balance between keeping what works while constantly making things better. For Marquette, placemaking has allowed the city to lay out and preserve a clear vision of where the community wants to go.

“I would say the biggest challenge is making sure you have a clear vision and clear manageable goals,” said Vajda. Goals need to be feasible with funding, which is often more volatile, being considered. “It won’t happen without a robust community discussion.”

To view more of Michigan’s efforts visit the 21st Century Communities site at placemaking.mml.org, MIplace at miplace.org or Let’s Save Michigan at letssavemichigan.com. Marquette’s plan can be seen at www.mqtcty.org/Vision.