Jonesborough, Tenn., the county seat of Washington County, is known as the oldest town in the state. It is located not far from South Carolina; Johnson City, Tenn.; East Tennessee State University; and several major employers. “We receive a tremendous amount of through-traffic,” said Town Administrator Bob Browning, noting the major east-west route passes through the town.

“We only have one four lane carrying a tremendous amount of traffic,” said Browning. “One of the things we’ve done as we have developed, especially around the four lane corridor, is install traffic signals.”

Traffic signals are prime locations for serious accidents and accidents with injuries. When people see a green light, they think they are protected and don’t look for oncoming vehicles busting through the intersection.

“We are a small town with a small income,” said Browning, noting they also have a small police department with two to three officers on at one time. “There is only so much we can monitor.”

With people traveling 60–75 mph, Browning noted accidents were more likely to result in major injuries. “One recommendation was that we conduct a study to see how best to reduce injuries,” Browning said. “One thing we looked at were traffic cameras. Knoxville (Tenn.) was using them and having what looked like good success.”

Jonesborough entered into a five-year agreement with Redflex Traffic Systems in July 2008 and placed traffic safety cameras at three signaled intersections on the four lane. Browning noted traffic cameras attract a lot of controversy, but added residents, overall, have been for their use.

From a law enforcement viewpoint, Browning said it’s just about getting people to slow down. He noted signage is placed alerting drivers to the use of photo enforcement. “We have seen a significant decrease in accidents with serious injuries. Safety has substantially improved — we are seeing changes in driving behaviors. They are paying a lot more attention.”

“We also set up speed record sensors in the ground,” Browning said, noting ground sensors are more accurate than the radar police use. The city is enrolled in a program where the sensors are certified for accuracy. Speeding is monitored by the sensors in the asphalt with drivers who go through the intersections at 56 mph or higher activating the cameras; the speed limit is 45 mph. “We have over 30,000 vehicles going through some of our three signaled intersections with cameras, and if you are going through one of these intersections at 56 mph or greater, it is extremely dangerous and you deserve a ticket,” Browning said. 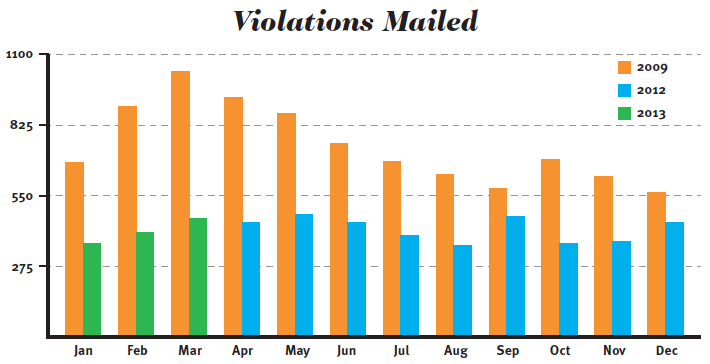 Pictured is a Redflex report for March 2013 detailing the decrease in violations mailed since the cameras were placed. Town Administrator Bob Browning has noticed people’s driving behaviors are changing. (Information provided by Jonesborough, Tenn.)

Redflex collects the citations, but trained Jonesborough police officers go through each citation prior to them being sent out. In March 2013, Redflex and Jonesborough officers rejected 121 violations. Drivers can contest violations with Jonesborough having one day at court dedicated to people challenging camera tickets. Footage recorded is played on a big TV in the court, showing what occurred. Fines received from camera tickets are not included in Jonesborough’s budget revenue and are put toward public safety projects including road repairs. Browning also noted some municipalities penalize or charge drivers who contest camera tickets, but added, “We don’t do that here.”

Tennessee recently passed regulatory legislature capping camera fines at $50, requiring traffics studies be conducted prior to cameras being placed and prohibiting officers from issuing citations for right on red turns unless signage prohibiting such turns is posted, among other items

“By passing these measures, the Tennessee legislation set standards similar to those in many other states requiring uniform policy and procedures for how municipalities should operate road safety camera programs,” said Jody Ryan, director of communications at Redflex Traffic Systems Inc.

On a national scale, according to Ryan, communities of all different sizes, in 27 states, are utilizing traffic safety cameras. The cameras are placed where there is a demonstrated need for increased roadway safety. Violation data, traffic patterns and crash statistics are all considered prior to cameras being placed.

“Communities across the country install traffic cameras as a way to make streets safer in their community. National studies show overtime drivers modify their behavior and roadways become safer.”

“There is no question it has been very positive,” said Browning. “If you look at the data, the number of citations have dramatically reduced. That in itself shows people are paying more attention.”

Major Natalie Hilton with the Jonesborough Department of Public Safety stated, “The year before we had cameras we had three fatalities at our intersections. Since the cameras, we had one, which was DUI related and about 500 feet back from the intersection. The cameras do much more than make the intersections safer. They put the responsibility back on the driver. If you do have an accident, officers can review video footage that shows exactly what happened and place the right driver at fault. The cameras are 24/7 eyes on the intersection.”

To view studies on traffic safety cameras, visit the Insurance Institute for Highway Safety at www.iihs.org/research/topics/rlr.