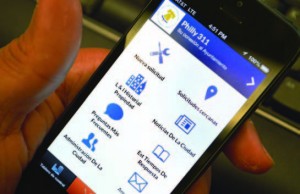 Citizens know who to call for a pothole, trash pileup and lighting problems, but often times, they aren’t sure who to call about things like graffiti or broken windows.

“The whole point of the government interacting with its constituents is that you want to be able to help them,” said Rosetta Lue, senior advisor to the managing director at the Philly311 Call Center in Philadelphia, Pa. “You’re going to have different approaches to doing that.”

In many cities, public works, streets departments and 911 call centers take the brunt of citizen complaints. Individuals who don’t know who to call dial 911, causing backups and making it harder for real emergencies to get resolved.

“He’s the buffer between the residents and myself,” Day explained of the liaison, a position filled by Jim Johnson. “Instead of calling me, they call him and he filters it down to me. We have so many things that we deal with that the liaison is crucial.” Johnson is on call 24/7, 52 weeks of the year. He keeps the communication lines open even when he’s on vacation, taking calls and contacting the corresponding department to handle them with about a 24-hour turnaround time for basic investigation.

A city of barely 50,000 residents, Huntington’s streets department still receives nearly 200 calls per day. In bigger cities the number of calls only grows. Mapping software, rerouting and redirection with a 311-system become crucial to cities with extensive service calls.

“The nice thing about 311 is it’s kind of like 911,” Tom Malanfant, CRS product manager at Motorola, explained. “The challenge is educating people about what 311 is.”

Baltimore, Md., first implemented 311 in 1996. The system was designed so that true emergencies could be answered quickly and representatives wouldn’t be held up from solving them by nonemergency callers.

“In a perfect world,” Malanfant said, “the citizen shouldn’t have to know which government service they’re calling. You should be able to just link those people up with the information they need and answer their question.”

Creating a 311 phone number for a city does more than just help route the calls. According to Malanfant, 911 calls in Windsor, Ontario, went down by nearly 40 percent after the implementation of 311 instead of a regular phone number. In other cities, 311 systems also allowed administrators to see what areas of town weren’t filing reports and do something about it.

“We found, going into those communities, that almost everyone had a cellphone,” Lue said.

With the mobile application Philly311, produced by PublicStuff, citizens can file a complaint, view other complaints around town and add their report to the complaint to increase it’s priority level. They get status updates during emergency situations, such as during Hurricane Sandy or freeze alerts, and nonemergency situations, such as fixing of a pothole or lights being out, and the application converts into 16 different languages for easy use.

Since it’s launch Sept. 13, 2012, the application has become the second most widely used means of communicating with the Phily311 Call Center, second only to actual phone calls.

“For me, this is just one of the options that other cities should be looking at,” Lue said. “You’re catering to different demographics. People want to know that they can communicate with you in different ways.”

“When it comes to multi-channel access, you’re going to have to create channels that your customers want to use to get to you,” explained Lue.