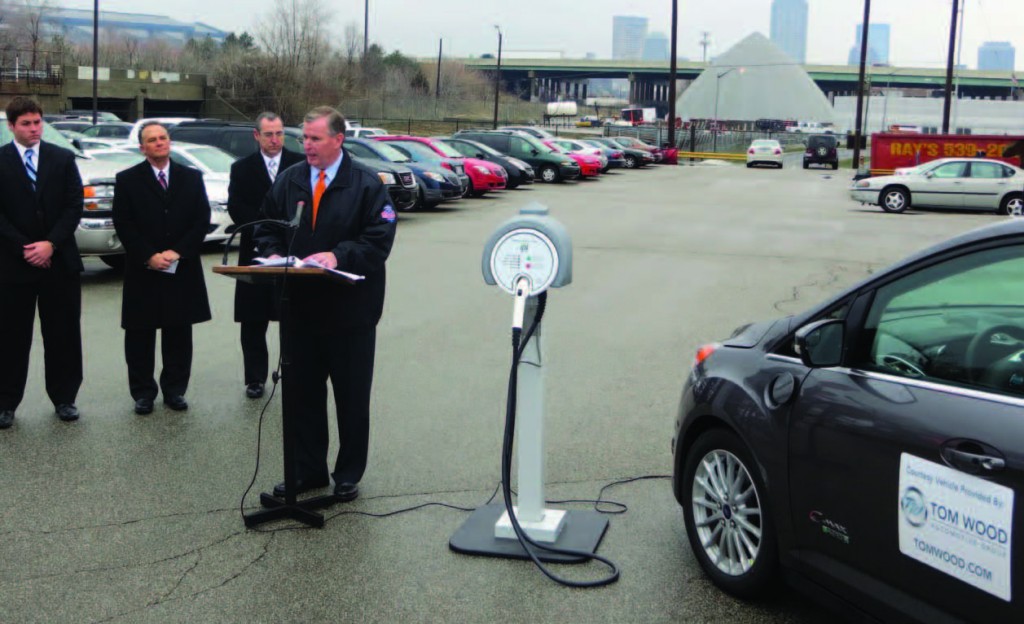 Mayor Greg Ballard of Indianapolis visited the city’s Department of Code Enforcement on Jan. 28 to announce a critical electric and hybrid plug-in vehicle partnership with Indianapolis Power and Light Company. IPL will purchase and install EV charging stations for three city vehicle fleet locations as a partner in the mayor’s initiative to transform the city’s vehicle fleet to post-oil alternatives by 2025. Ballard is pictured making the announcement, with, from left, Cole Willis, IPL Electric Vehicle Program manager; Greg Fennig, IPL vice president of community relations; and Rick Powers, Indianapolis Department of Code Enforcement director behind him.

“It’s completely about national security,” David Rosenberg, director of Enterprise Development at the office of the mayor, said. “It’s about the dependence on foreign oil and the need to spend billions of dollars on protecting this oil infrastructure.”

Ballard met with automobile manufacturing executives Jan. 15 at the North American Auto Show in Detroit, Mich., to discuss the issue. He hopes to convert the city’s entire vehicle fleet to post-oil technology by 2025 and wants to gain support around the country for the idea.

“Our goal is to build a coalition of cities that will reduce dependency on oil,” Rosenberg explained.

Ballard has already begun building his coalition. He put the challenge to colleagues at the February U.S. Conference of Mayors Winter Leadership Meeting in Washington, D.C.

“We’re just trying to push the message to mayors to get them involved,” Rosenberg said.

A former Marine, Ballard served in the Gulf War in Kuwait.

“The mayor feels strongly about this,” Rosenberg explained. “He understands the reason our military forces are in the Middle East. He spent three years in the burning oil fields, he speaks very passionately about it.

“It is kind of unusual because it doesn’t have the green aspect, but we’re finding it’s a wildly bipartisan issue,” Rosenberg continued. “It goes across the aisle to make good public policy for the nation. If you look at the numbers, we’re spending billions and billions of dollars in the Middle East, and we don’t have to.”

Companies in Detroit, Mich., have already proven that post-oil technology can be used for municipal services. DTE Energy, Detroit’s leading electric and natural gas provider, has begun using compressed natural gas in Ford F-650 utility trucks. According to Mike Levine, truck communications manager at Ford Motor Company, CNG-capable trucks can be bought solely as a CNG vehicle or as a bi-fuel vehicle, which has the capability to convert to a CNG if needed for about $10,000. At a rate of $2 per gallon, if a vehicle is driven 10,000 miles in a year, municipalities can see payback in as little as three years.

In Indianapolis, the process has begun, and companies are partnering with the city to help the transition go more smoothly. Indianapolis was already on the fast track to becoming a top green community thanks to the Project Plug-in Initiative of 2010, when Energy Systems Network put in over 100 vehicle charging and CNG stations around the Indianapolis area.

Indianapolis Power and Light, along with the city of Indianapolis, is working with the Indiana Regulatory Commission to develop a return model that will allow the company to use a portion of its rates to pay for new green infrastructure.

Ballard hopes partnerships and initiatives can continue to go in the city’s favor as the process continues. Indianapolis plans to transfer all municipal large utility trucks to CNG technology like DTE Energy in Detroit, which already has public stations around town, and is making plans to sign an order that all sedans, such as police units, go to plug-in or hybrid technology.

“We want to develop an alternative fuel police car,” Rosenberg stated. “We want a car manufacturer to work with a university here in town. It can be a win-win for a car company, the university and the city.”

In an interview done by ABC 59 News during the auto show, Ballard made reference to the Ford Police Interceptor — stating that the vehicle would support the needs of police officers now. But he wants more than that.

Currently, police cars in Indianapolis get around 10 miles per gallon, which uses up a lot of fuel throughout the year. The city would likely save $12,000 over the life of a vehicle if less or no oil was needed, assuming the vehicle had a plug-in option but could also get 40 miles per gallon; this would also save the city $6–$10 million per year.

New York City uses the Chevrolet Volt as a meter-checking police unit, but the car doesn’t have the horsepower or capacity that responding vehicles need, Rosenberg said.

As of February, the city was collaborating with car companies to find the right vehicle for that kind of use. While they’re still in the beginning stages of the initiative, Rosenberg felt that they are moving through the process quickly. “We’re working internally to get this process rolled out there very soon.”