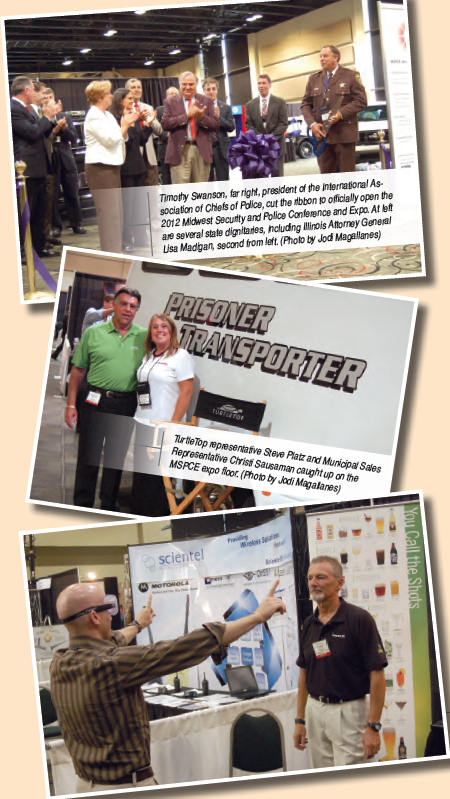 Timothy Swanson, far right, president of the International Association of Chiefs of Police, cut the ribbon to officially open the 2012 Midwest Security and Police Conference and Expo. At left are several state dignitaries, including Illinois Attorney General Lisa Madigan, second from left. (Photo by Jodi Magallanes)

At the Innocorp booth, former patrol officer Phil Neidner puts Municipal Sales representative Matt Dudlak through a field sobriety test. The goggles Dudlak is wearing give the effect of having a blood alcohol content of 1.7-2.0. The chart behind Neidner explains visually the difference in alcohol content between dozens of common adult beverages. (Photo by Jodi Magallanes)

Members of The Municipal staff attended the Midwest Security and Police Conference and Expo in Tinley Park, Ill., in August, where they met with the people who read the magazine and the companies who make the products and equipment that police departments count on.

The MSPCE also afforded the opportunity to tour a custom-built bomb squad vehicle capable of transporting and maneuvering multiple bomb-handling robots at once, and to hear the latest on cyber investigation techniques during one of several educational sessions.

Bryce Baker of the Palatine, Ill., truck enforcement department, shared best practices of enforcing truck weight limits and gave examples of the common mistakes made by law enforcement officers. Participants also expressed a great deal of interest in the 2013 GM and Ford police cruisers that were on display.