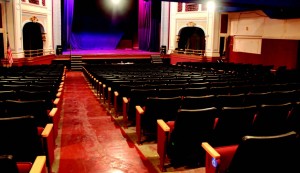 Once renovation efforts are complete and the building is ADA compliant, the Miner’s Institute could prove to be more than a theater for the Collinsville area, possibly hosting weddings, parties, concert and other special events.

The Miner’s Institute has stood at the center of Collinsville, Ill., for almost a century, opening in 1918 through the combined effort of coal miners belonging to the United Mine Workers Locals 848, 264 and 685.

After its time as a union hall, the building acted as a theater and movie house, eventually being placed on the National Register of Historic Places in Aug. 28, 1985. More recently, it underwent renovations to restore it to its former glory.

Michael Romanich has served as president for the Miner’s Institute Foundation since 2009. MIF, which was founded 1988, had purchased the Miner’s Institute before turning it over to the Collinsville Area Recreation District around 2008. That transfer was done in part because CARD held more resources from funding and state contacts. MIF continued to be involved with the property as a fundraising arm of the renovation project.

The first phase of the Miner’s Institute renovation began in 2010 and was completed in May 2011. According to Romanich, a second phase had been talked about and would have consisted of placing a building next to the Miner’s Institute to hold a dressing room and an elevator for moving props; however, all plans have been stalled.

“There was been kind of a scuttle in August and September of last year,” he said, noting another small city that is a part of CARD had complained about the project among others being a waste of taxpayers’ money. “It was one of the larger complaints though there were others. It was a public thing that got out of control.”

The executive director of CARD stepped down in the midst of the hoopla and new people got involved, leading to the request to return ownership of the Miner’s Institute to MIF.

“In my opinion it is much better if they handled it, they have more resources,” said Romanich. “It is tough for us since we are all volunteers. But I can understand where CARD is coming from.”

MIF received a letter from CARD requesting they either take back ownership of the property or allow them to sell it. The MIF board then voted 4-2 to take back ownership of the property. Currently, Romanich stated, they are waiting to hear back from CARD. “The ball is in their court. Sometimes it takes a long time, its difficult to say.” Romanich added that he personally expects the process to be rather lengthy since the transfer requires a lot of legalities.

“We had a few people who thought it was not in our best interest to take it back.”

They held a discussion before taking the blind vote. “People are just worried about where we are going to get the money.”

Several daunting tasks lay ahead for MIF before the property can be opened to the public and provide revenue. Romanich explained that currently the building is without heat after the sump pump stopped working, resulting in the basement getting flooded and the boiler rusting out. The other need is ADA-compliant bathrooms, especially a men’s bathroom, which will need to be moved to the building’s first floor. Both of these tasks will be costly with previous CARD estimates at $40,000 to $50,000 according to Romanich.

“We are going to make the best of it. I’m disappointed but not mad at them. If it were different times, a different economy, it might have made it past completion still could, but right now it is up in the air.”

While MIF waits to hear back from CARD, Romanich stated that not much is occurring besides talk since CARD could still decide to keep the property should things change or the money become available. Once the property transfers over to MIF, if it does, the small nonprofit will be responsible for maintenance and utilities.

“We’re not diving in more until we know exactly what is going on — just a lot of talk now. Hopefully soon we can move forward or help CARD move forward,” Romanich said.

Once renovations are complete, he sees the Miner’s Institute as a multidimensional building with plenty of rooms for graduation parties, weddings, receptions, concerts and other community-minded events on top of its role as a theater.

“It’s important to get it up and going,” said Romanich. “I think it will be a nice addition to uptown. It’s not just a theater; it can be a little bit of every thing. It could do something different each day and bring traffic uptown. It’s a win-win — good for them, good for us and the community.”

Romanich said he remains healthily optimistic on the Miner’s Institute’s future. “Who knows, it could really take off, but on the flip-side it could go nowhere.”