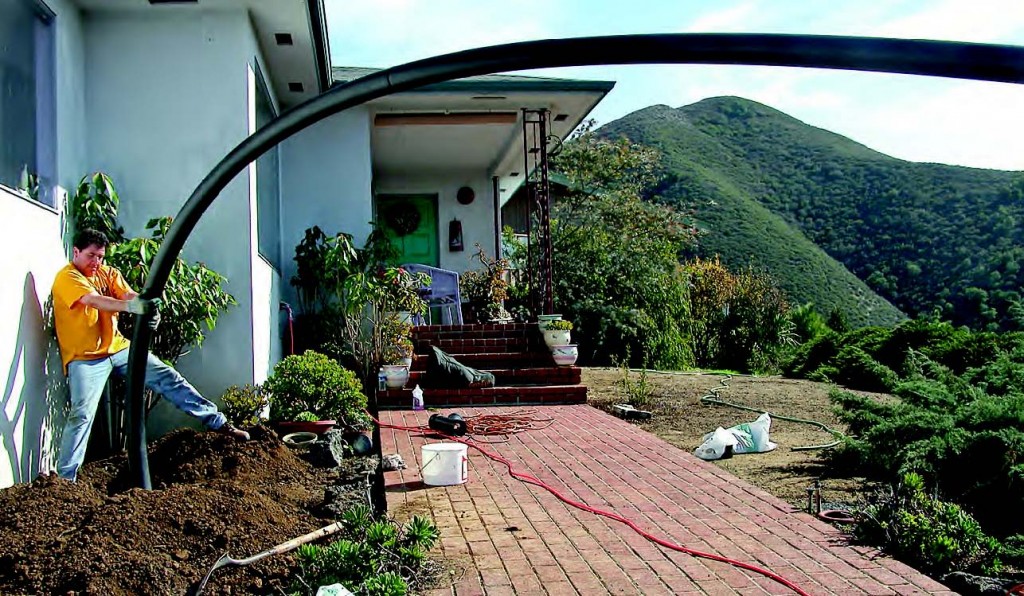 Lateral bursting is a relatively new technique in the field of trenchless infrastructure rehabilitation.

Before lateral pipe bursting was introduced, trenchless methods catered almost exclusively to large municipal or government projects. By contrast, the first lateral pullers entered an arena whose jobs were small and private. In this new private market, there were significant challenges to overcome.

Lateral bursting required high-density polyethylene, a plastic that was not listed in building codes regulating sewer work on private property. Approval was granted city by city in the San Francisco Bay area in the late 1990s and since then, both pipe and process have been added to national and international code books.

Other challenges were mechanical. Laterals commonly include physical turns one-eigth or one-sixteenth bends in the line to accommodate the flow path from building exit point to municipal connection. Sewers can exit a building from various points, which are often in restricted space or covered by surface improvements. Cured-in-place liners had arrived, but were better suited for spot repairs with no excavation at all. Liners were not as permanent a solution and compared to bursting, were neither practical nor cost-effective for most laterals, especially those in serious disrepair.

The first lateral bursting systems met these unique logistical conditions by employing flexible replacement pipe, HDPE, in concert with flexible steel cable to negotiate the inevitable bends in the existing pipeline. Further specialization was required of the pulling device itself. The prototypical models were modified post-tensioning rams mounted on a pulley base against a resistance plate, directing the cable and pulling force vertically rather than horizontally. These hydraulic rams were small, light and high-pressure rated, making them portable enough to carry and position by hand, yet powerful enough to burst most home sewers easily.

Trenchless lateral replacement has since been widely accepted and has become a specialized utility market segment. This niche industry has produced thousands of job scenarios, from which we can derive a few general guidelines for success.

Regardless of the equipment used, the process of lateral bursting is the same. The first task is to gather as much information as possible about the sewer to be replaced before bidding a job. A thorough video inspection is essential to determine the location, material, size, condition and depth of the host lateral, including bends and connections along the way. Since they must be exposed anyway, all active tie-in points between entry and exit pits should be exposed prior to bursting and then joints and couplings should be removed before insertion of the pulling cable or chain.

The direction of the pull is influenced by the location of entry and exit pits. Pipe variables, soil conditions, adjacent utilities and bend locations must all be considered. When possible, pulling upgrade has advantages including reducing the bursting pressures in very hard soil by using a garden hose to fill the host pipe with water. This makes the process easier and also causes less wear on equipment.

Bends in the line are also a major consideration. If a bend is closer to one pit than the other, it is recommended to enter at the point closer to the bend to make it easier for the bursting head to make the turn.

Once decided, the direction of a pull determines the dig at either service end, and one end can be vastly different from the other. The exit pit needs to accommodate the pulling apparatus and eventual head extraction. The entry pit needs only to expose the existing pipe with enough working space to reconnect service and provide a sufficient access angle for the new pipe and bursting head to enter the old pipe.

Pipe bursting is mostly planning and preparation. The objective in lateral bursting is to install a new sewer with maximum efficiency and minimum disturbance to property and homeowners, and then repeat the process regularly. Achieving this objective creates satisfied customers and a profitable business.